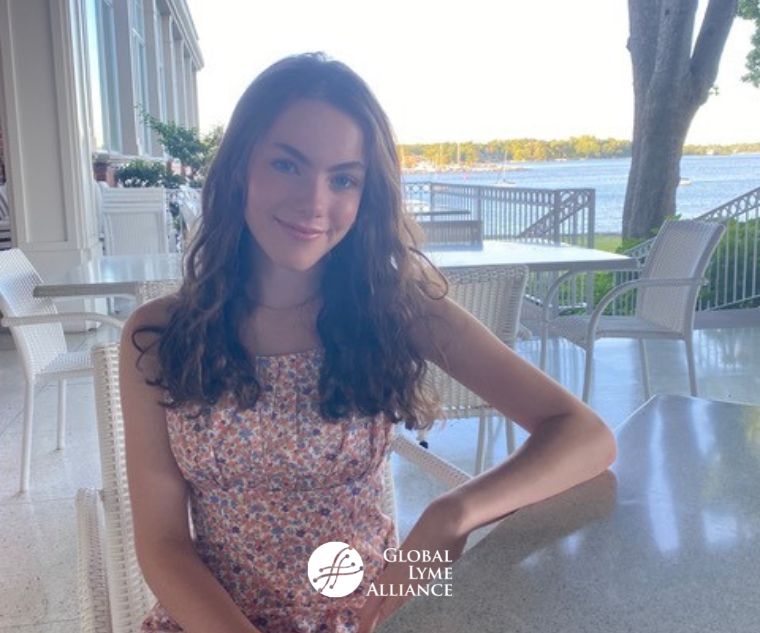 Evie Shurslep, from Larchmont, New York, was first diagnosed at eight-years-old with Lyme and multiple co-infections, including Bartonella, Tick-borne Relapsing Fever, and Babesiosis. Today, she is finally ready to share her story.

In 2020, I moved houses. Now, I’m fifteen and living by the water, but from ages one to fourteen, I lived twenty feet away from a park. As a kid, I would go to that park every day, running between the trees, spending time on the playground, and riding my bike. Once in a while, I would spot a deer in the bushes. Back then, I was living with a sense of ignorant bliss, because little did I know, there were ticks all around me, carrying diseases I would live with forever.

When I was Bitten

When I was eight years old, I was bitten by a tick. I, nor anyone in my family, had ever heard of Lyme disease, and we never thought that we would all be experts just a few years later. I have had Lyme and several co-infections, including Bartonella, Tick-borne Relapsing Fever, and Babesiosis three times now. It all started with a simple ear infection. I went to my pediatrician, who prescribed me the average ten day ear drops and told me to come back when I finished them. Two weeks later, not only was I still suffering from an ear infection, but I was also developing more symptoms. 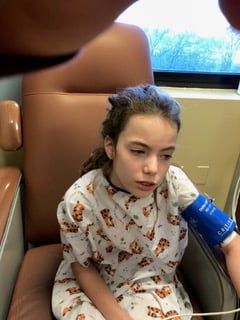 My mom said that it was like a light switch went off inside me. I am typically an active and chatty person, but I had been the complete opposite ever since the infection. I had constant headaches and stomach pain, and I was way more fatigued than normal. My doctor assumed that it was a virus and told me to rest and drink plenty of fluids. I had tested negative for both the flu and strep; however, my mom had just read about Lyme disease in an article and wanted me to get tested for it. The pediatrician was reluctant, as she thought my mom was being crazy, but decided to run a blood test anyway. A few days later, my family went to Minnesota to visit my grandparents and during that vacation, my mom received a call from the pediatrician telling us I had tested positive. My parents had to drive an hour from Minneapolis to Appleton to get doxycycline. I took this medicine for thirty days, and my Lyme went away. While taking medicine, I was constantly fatigued, or as my mom described me, “powered off.” Aside from the fatigue, I constantly said that I felt “blah.” This just meant that my muscles hurt, I couldn’t exercise much, and I was tired all the time. My most vivid memory was the stress of eating enough with my doxycycline. I could never eat enough for this medicine, as I was so young taking such a high dosage. I can remember walking to breakfast with my dad and brother, making sure to take the medicine with me before I left. Just after my food came, I made them all leave the restaurant because I was so nauseous. I threw up as soon as soon as I got home. Despite the fatigue and stomach aches while being on doxycycline, I recovered by the time my prescription was up, and I was back to normal for the next three years. 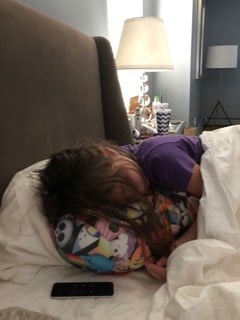 In fifth grade, I got sick again and spiked a fever. I had a fever every day for seven weeks and was so fatigued that I could not even get out of bed. Every morning for that seven week period I would wake up, walk down the hall to my parents’ room and just watch television all day. I experienced symptoms such as joint, hip, and rib pain, headaches, nausea, extreme fatigue, and a “marathon feeling.” Eleven year-old me did not know how to describe air hunger, which we later found out is a common symptom of Lyme. I also experienced so many weird little things such as my fingers tingling and being super sensitive to light. I also had this feeling of needing to take long deep breaths and hold them because I was having heart palpitations. The only time I would go outside was to visit doctors. Those at school were supportive, sending me cards, a giant box of games, and an edible arrangement.

I later went to my pediatrician, who again tested me for the flu, strep, and Epstein-Barr. Everything came back normal, so she sent me to get a chest X-ray in order to check for pneumonia. That also came back normal, so she then sent us to an infectious disease doctor. We went there fourteen days after my fever started, and my symptoms at the time included fatigue, fever, a sore throat, and frequent stomach aches. He asked if I had eaten any raw foods or been around wild animals. His focus was testing for animal diseases, parasites, and mycoplasma. He did not find anything abnormal from the physical examination, so he tested me for Epstein-Barr, Mycoplasma, H. Pylori, and Giardia, all of which came back negative. He told us that the only thing left for him to do was an ultrasound of my abdomen and pelvis which both came back fine. 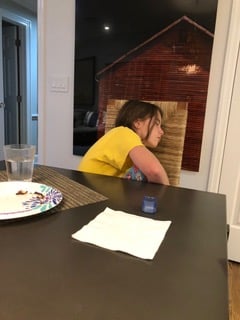 My pediatrician then sent us to a rheumatologist. She tested for Lupus and junior rheumatoid arthritis. I remember feeling so hot at her office, just wanting to go back to sleep with an ice pack. This was probably my first time out that week. She checked my reflexes and joints, which were all fine. At the end of my appointment, she called my pediatrician and told her that whatever I had was not under her umbrella. She and my pediatrician then decided to send me to a GI. Honestly, I am very lucky that I had a fever because since everything was coming back normal, doctors would have stopped believing me! Before going to the GI, my mom wanted to take me to a Lyme doctor, since I had it before. The pediatrician did not support this, because she didn’t think I could have Lyme more than once. I tested negative, but the Lyme doctor wanted to treat the symptoms anyway, putting me on doxycycline again. The medicine was so hard on my stomach that I stopped taking it quickly after I began. The next week, I went to Mt. Sinai hospital and the GI ran a colonoscopy, endoscopy, MRE, aonogram, and CT scan. Everything came back normal Feeling incredibly frustrated, my parents decided to call our family friend whose dad is a heart surgeon. He referred us to another doctor,  who told my parents not to rule out Lyme, so then we went straight back to the Lyme doctor. I tested positive for all the bands, and the doctor said the last two must have been false negatives, which are very common. 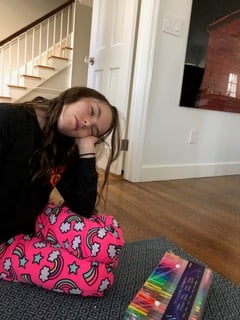 I finally started Lyme treatment again and started to feel better. I went back to school after those seven weeks, continuing to take medicine. I remember going to the nurse every morning to eat crackers because my stomach would hurt so badly. At this time, I was on doxycycline and Malarone. I still had symptoms, and would constantly not feel well enough for sleepovers. I got headaches often and my joints hurt a lot, but overall, I was getting better. I switched between Lyme doctors, and I now see Dr. Tania Dempsey. I have tried many different treatments, such as liquid drops and various pills. I took Ceftin, Amoxicillin, Cistus tea, antihistamines, and so much more. I’ve even tried different diets, such as high-fat low-carb and eating absolutely no sugar, dairy, or gluten. The latter worked well for me. Lyme feeds off sugar, so I found that when I ate it, my joints started to hurt and I got headaches more frequently. My doctor preaches a carnivore diet, but that is unrealistic for a 12 year old girl. I did eat bacon every morning and meat at every dinner for a while. I didn’t find that it did much though- plus, it was gross. I took liquid drops too, like charcoal shots, stevia drops, Burbur Pinella, etc. I remember waking up and immediately drinking charcoal before school- it was disgusting. After trying just about every medicine there is, I started to feel better.

The summer before eighth grade, I started to not feel great again. I was supposed to go to a three-day fitness camp right by my house, but I was too tired to even get off the couch. It was  like there was a weight on me. Moving is difficult when your muscles, tendons, and bones feel tired. The strangest places where I would get aches were my shins and all the way from my elbow to my wrist. I had frequent visits to my Lyme doctor, tried all different medicines, and even tried a liquid IV. After months of all these treatments, I started to feel like myself again.

Where I Am Today

Today, I am feeling well, but when I don’t sleep enough, eat enough, consume too much sugar, or forget to take my medicine for too long, my muscles and joints start hurting again. Once I start being more diligent, I am able to feel better. I’m glad to be well now, but I will always have to be conscious of Lyme disease. 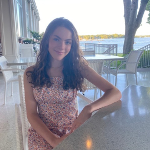 *Opinions expressed by contributors are their own. Evie Shurslep is 15 old girl from Larchmont, New York who attends Rye Country Day School. She was diagnosed with Lyme and multiple co-infections after having two long waves of sickness- one at 8 years old and one at 11 years old. She experienced another wave at 13, and has done many different treatments since then. As a GLA contributor, she aims to help other families dealing with a “mystery illness,” as many people spend years struggling with Lyme before being diagnosed.