Co-Infections and Other Tick-Borne Diseases

While Lyme disease is the most common vector-borne illness, ticks may carry multiple infectious organisms (co-infections) along with Lyme. Here are some common tick-borne diseases. Future research may uncover additional co-infections. 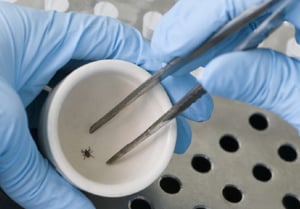 BABESIOSIS – A malaria-like, parasitic infection of red blood cells. Most cases are caused by the parasite Babesia microti, though occasionally caused by other strains of Babesia. Symptoms can be mild to life threatening, with a high fever, sweats, nausea, headaches and fatigue.

BARTONELLA HENSELAE – CAT-SCRATCH DISEASE – Bacterial disease starting with a red mark that can become swollen and discolored or even look like “stretchmarks”/striations. Symptoms include swollen lymph nodes (especially under ears) often with conjunctivitis, heart or spleen problems, bone lesions, hepatitis, other eye problems and encephalitis (causing seizures and coma). There is indirect clinical evidence that this is a group of “Bartonella-like organisms” that can co-infect a Lyme patient. Identification of these organisms awaits further scientific study.

BORRELIA MIYAMOTOI – One of the newer tick-borne infections, it is distantly related to the bacterium that cause Lyme disease. Patients with this infection are most likely to have relapsing fever, chills, headache, fatigue, body and joint pain. Left untreated, it can morph into a disease that causes cardiac, neurologic and arthritic problems.

BOURBON VIRUS –  An extremely rare new virus reported in two people in Kansas and Oklahoma. The Oklahoma patient made a full recovery, while the first and only other case in Bourbon, Kansas was deadly. Symptoms include fever, fatigue, rash, muscle and joint pain.

COLORADO TICK FEVER – Viral disease characterized by a high fever and sometimes a faint rash. After a 2-3 day remission, symptoms recur, accompanied by a drop in white blood cells. Complications may include encephalitis, heart problems and severe bleeding.

HEARTLAND VIRUS – Studies suggest that the Heartland virus, first identified in Missouri, may be spread through the bite of an infected Lone Star tick. To date, the virus has been found in Missouri, Tennessee and Oklahoma. Symptoms include easy bruising, diarrhea, fever, headaches, fatigue, appetite loss and muscle pain. There are no known treatments for it.

MYCOPLASMA – Although not necessarily transmitted along with the Borrelia bacterium via an infected tick, Mycoplasma fermentans organisms are often present in Lyme disease patients. Smaller than bacteria, they invade all cells throughout the body and disrupt the immune system, causing severe fatigue, joint pain, nausea and neuropsychiatric problems.

ROCKY MOUNTAIN SPOTTED FEVER – Caused by the bacterium Rickettsia rickettsii, it is transmitted by the American dog tick, Rocky Mountain wood tick and brown dog tick. It can cause a reddish-to-black rash resembling measles, though in some patients a rash never develops. It can be a severe or even fatal illness if not treated in the first few days of symptoms.

SOUTHERN TICK-ASSOCIATED RASH ILLNESS (STARI) – Also known as Masters disease, this disease is transmitted by the Lone Star tick. Early STARI symptoms are similar to the symptoms of early Lyme disease, including a circular rash. The rash may be accompanied by fatigue, headache, fever and joint pains

TICK PARALYSIS – Loss of motor function and increasing paralysis caused by a toxic reaction to saliva from female ticks.

TULAREMIA – A bacterial infection (sometimes called rabbit fever), the hallmark of which is the development of an ulcer at the site of infection. The illness can manifest in various symptom complexes, including spiking fevers, inflamed lymph nodes and eyes, pneumonia and weight loss.

Lyme disease occurs in three stages. Symptoms may begin hours, a few days or even weeks after a tick bite.

Ticks and the Diseases They Cause in the U.S.