What Is Lyme Disease? 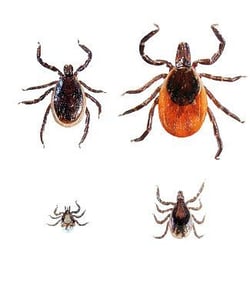 Lyme disease is an illness caused by the bacterium Borrelia burgdorferi. These bacteria are carried by the black-legged tick, also known as the deer tick (pictured). When an infected tick bites you, it can transfer bacteria under the skin, leading to infection. If diagnosed and treated early, many patients recover. However, if not diagnosed or treated early, Lyme disease can develop into a chronic illness that leads to long-term, serious health problems and reduced quality of life. In rare cases, Lyme disease can result in death.

While Lyme disease was named for the town in Connecticut where it was first identified, Lyme disease-carrying ticks are found throughout the United States (US). The highest concentrations of black-legged ticks are found in the northeast, mid-Atlantic, and upper Midwest regions of the US. In recent years, confirmed cases of Lyme disease have been reported in every state. Most recent estimates are of 476,000 new cases of Lyme in the US every year. Scientists estimate that two million people could suffer from post-treatment Lyme disease at the end of 2020. Lyme disease has also been found in 80 countries.

How Do You Get Lyme Disease?

Lyme disease is transmitted through the bite of an infected black-legged tick. Ticks look for hosts to feed–hosts can include pets, deer, mice, birds, squirrels, some reptiles, and yes, people.

The length of time for a tick to transmit disease can vary based on the type of tick and the stage of the tick (nymph vs. adult, for example). Experimental studies have shown that the Powassan virus, transmitted by black-legged ticks, can be transmitted within 15 minutes of attachment. Research shows that Lyme-causing bacteria takes more than 24 hours to transmit from tick to host, but there are many debates and caveats on exact transmission time. Most importantly, it’s important to remove an attached tick as soon as it’s found, and to remove it properly to avoid the spread of pathogens.

Who Is Most At Risk for Lyme Disease? 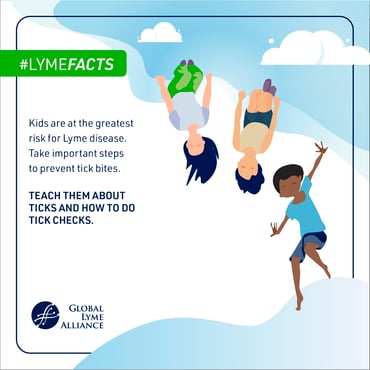 Children aged 3 to 14 are at the greatest risk for contracting Lyme disease, due in part to being more active outdoors, with more than 200 cases per day. The next age group most at risk is people over 50, who are also more involved in outdoor leisure activities like gardening, hiking, or playing golf. People who work outdoors for a living, including landscapers, utility workers, and farmers have an occupational risk for a tick bite. Pets who go outdoors, like dogs and cats, may bring ticks into the house and should be checked upon entering the home. Think of your pet as a “tick taxi.”

Ticks are not just a suburban problem; they are everywhere including urban areas and cities. Many people get bitten by a tick in their own yards and local parks. While you are most likely to be bitten by a tick during the warmer months, ticks can be active year-round and are active at any temperature above 34 degrees Fahrenheit.

How is Lyme Disease Diagnosed? 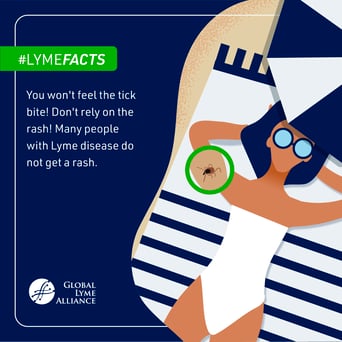 If you developed a bulls-eye rash due a tick bite, you have Lyme disease. For patients you don’t develop or recall a rash, the disease is typically diagnosed by a combination of clinical diagnostics and blood work. However, given the high-rate of inaccuracy with current Lyme disease diagnostic tests, about 50%, it’s crucial to consult with a Lyme-treating healthcare provider that can evaluate all your symptoms and medical history to make an accurate diagnosis. Click here to learn more about how to diagnose Lyme disease. Click here to learn more about the symptoms of Lyme disease.

Cases of Lyme Disease Are on the Rise 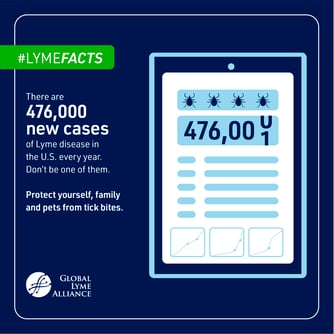 It’s estimated that there are 476,000 new cases of Lyme disease in the U.S. each year. There is a near 25x increase of annually reported cases since 1982. All tick-borne disease cases have more than doubled in the last 13 years.

Cases of Lyme continues to outpace other infectious diseases in the U.S. by significant margins. In fact, there are 618% more new cases of Lyme disease in the U.S. than Hepatitis B, Hepatitis C, and West Nile Virus combined. This doesn’t even take into account the growing number of other tick-borne infections. Learn what GLA is doing to help.

Learn about diagnosing Lyme disease including stages, testing and symptoms.

Pamphlet that covers the most important aspects of Lyme Disease.

If you camp, hike, work, or play outside, you could be bitten by an infected tick. Preventing Lyme disease is one of the most important things you can do.

Treatment for Lyme disease will vary from patient to patient depending upon the stage and severity of symptoms, presence of co-infections, age, and other clinical factors.

Ticks are small crawling bugs that have eight legs, are related to spiders and mites, and feed on the blood of humans and animals in order to survive.