Kids and Lyme disease, part 2. This blog addresses some common cognitive Lyme disease symptoms among children and how they may present in school

Summer is over and schools are back in session. As your kids adjust from spending summer days outdoors to being in the classroom again, have you noticed anything different about their behavior? Are they, for example, having trouble focusing? Is it harder getting back into the school routine this year? Are they suddenly forgetting about homework assignments? Do they seem more easily irritable than usual? Are they so exhausted they’d rather hang on the couch than play with friends after school?

It’s easy to dismiss any of these changes as momentary blips—and sometimes they aren’t more than that. But if this isn’t your child’s typical behavior, he or she may be suffering from a tick-borne infection like Lyme disease, which can take several weeks or months after a tick bite to develop. Meaning a tick bite that either went unnoticed over the summer, or even one that was treated, could result in symptoms now. With that time delay parents might not so readily connect the child’s symptoms to a tick bite. This opens the door for the disease to advance from an acute to disseminated or late stage form before it’s even detected.

Early stage Lyme disease is usually diagnosed based on physical symptoms, such as a bulls-eye rash, fevers, headaches, tiredness, joint, muscle pains, etc. But Lyme can also cause many psychiatric and cognitive symptoms that can be easily missed or confused with attention deficit/hyperactivity disorder (ADHD), juvenile rheumatoid arthritis, gastritis or learning disabilities. 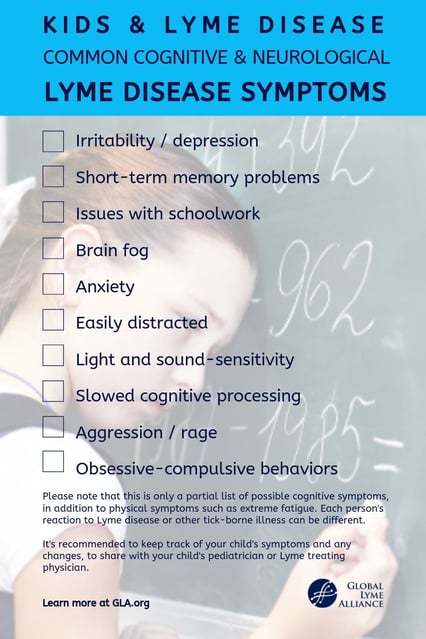 Unlike adults, children with Lyme disease often can’t always explain what feels wrong. They suffer when their bodies hurt, when they can’t get enough sleep at night, when they struggle in school, when they don’t feel like playing. Typically, says Daniel Cameron, M.D., M.P.H., children and adolescents suffering with Lyme disease will often have intense headaches that can last for days, mood problems, and they may experience an inability to engage in activities they once enjoyed. A happy child can become sad or weepy, an active child can become passive, a calm child may start acting aggressively for no reason.

On the other hand, some of the symptoms can be so subtle, Dr. Cameron says, that parents and clinicians can mistakenly blame behavioral or cognitive symptoms on a variety of factors such as the child’s developmental stage, mononucleosis, depression, or even spending too much time on cell phones. Too often, and this can be tragic, it can take years of misdiagnoses and misunderstanding before parents know what’s troubling their child, and by then the disease has become chronic.

Because some of their symptoms, such as irritability, joint aches and difficulty concentrating, can mirror “growing pains,” legitimately sick children are often overlooked, told that their problems are “all in their heads.” Parents and teachers may suspect the child or adolescent is simply trying to avoid schoolwork, daydreaming, or acting up, when, in fact, one or more insidious tick-borne illnesses might be the cause.

If a child’s behavior is out of character that could be a clue that Lyme disease needs to be seriously considered,” says Dr. Cameron. “Too many kids in schools today are needlessly suffering without a proper diagnosis.”

It’s important for a child to get tested for Lyme disease when unusual symptoms manifest. If you suspect your child may be suffering from Lyme symptoms, he or she should see a physician who is trained to evaluate, diagnose and treat tick-borne disease. The impact Lyme symptoms have on a child can be quite devastating and should not be underestimated.