Kids and Lyme Disease: Time for a Post-Summer Symptom Check

Kids and Lyme disease, part 1. This blog addresses some common physical Lyme disease symptoms among children that may appear at early stage of the disease

Summer is the ideal time of year for kids to be outside—fun at camp, time at the beach, catching fireflies, and just being a kid running around. Summer is also  the time of year when ticks are most active.

As your kids start making the transition from spending the day outside to getting ready for school, it’s a good time to be on the lookout for any physical changes. For example, have you noticed any physical disparities in them? Do they seem like they are dragging a little? Is it tougher to get them out of bed in the morning? Are they complaining of headaches or neck pain? Are their joints bothering them? Did they develop any flu-like symptoms?

If you’ve answered “yes” to one or more of these questions, and this isn’t your children’s typical behavior, he or she could be suffering from a tick-borne infection, like Lyme disease.

Early-stage Lyme disease symptoms to look out for include, but are not limited to: fevers, stiff neck, headaches, tiredness, trouble sleeping, joint and muscle pain, and loss of appetite. As a result, the illness is often misdiagnosed as the flu—especially if there is no bulls-eye rash, often a tell-tale of Lyme disease. Keep in mind, however, that many patients don’t develop a rash and don’t recall the tick bite.

It’s easy for a parent to miss the early signs of tick-borne illness. A key challenge is that many of these symptoms can indicate a variety of illnesses. Joint pain, for example, often gets chalked up to ‘growing pains’ by many pediatricians. However, when combined with other symptoms, and the possibility of tick exposure, Lyme disease should be considered.

Physicians who say it’s growing pains should look to see if it’s tick-borne disease,” said Daniel Cameron, M.D., M.P.H. This is the most common illness that doctors and patients overlook. Unfortunately, some doctors won’t budge from this position and won’t even consider Lyme as the problem unless the child exhibits a rash.”

Further compounding the challenge in diagnosing early-stage Lyme is the inaccuracy of current diagnostic testing. Currently, common testing is inaccurate more than half the time. If you suspect Lyme, and your child does not have a rash or you don’t find a tick, it’s a good idea to write down all the symptoms they’re experiencing and timeline. This will help your physician. 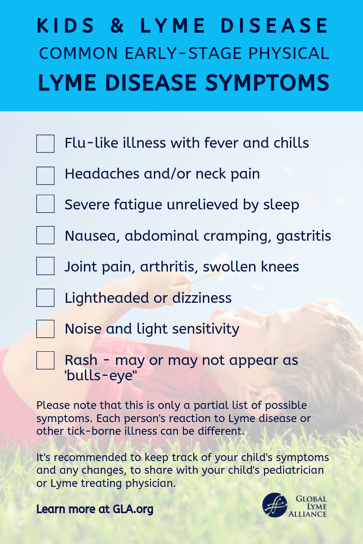 “Lyme disease can be difficult to recognize in children,” says Dr. Cameron.  “Children frequently become ill with viruses and infections and as a result the disease manifestations particular to Lyme can be missed.”

It’s important for a child to get tested for Lyme disease when puzzling symptoms first manifest, before the illness gets a chance to progress to its late or chronic stage. If you suspect your child may be suffering from Lyme symptoms, he or she should be tested for all conceivable root causes of their problems—including the possibility of tick-borne diseases. Don’t forget, too, that a single tick bite can infect children with multiple tick-borne illnesses, making accurate diagnosis even more difficult.

If children get diagnosed early and treated promptly, they usually get well. Yet if Lyme disease goes undiagnosed and untreated, symptoms can worsen. Remember, parents know their child best. If you suspect something is not right, demand answers.