What Are Ticks and How Do They Transmit Lyme Disease?

Ticks are small crawling bugs that have eight legs and are related to spiders and mites. They are arachnids, not insects. Ticks are parasites that feed on the blood of humans and animals in order to survive. They are called vectors (carriers) because they can feed on a Lyme disease-infected animal (such as a mouse), then carry and transmit the Lyme bacterium (Borrelia burgdorferi) to the next animal or person they bite.

There are hundreds of different kinds of ticks throughout the world. The Ixodes tick, commonly called a black-legged tick, are ticks that carry Lyme disease. In the eastern and mid-western U.S, the primary species is Ixodes scapularis (or deer tick) and the related western U.S. version is the Ixodes pacificus (western black-legged tick).

These ticks that carry Lyme disease can also carry bacterial co-infections, such as Babesiosis, Ehrlichiosis, and Anaplasmosis. While Lyme disease is the most common infection from a tick, co-infections can complicate one’s Lyme disease diagnosis and treatment. Learn more about ticks and the other diseases they can cause in the U.S.

What Season Do Ticks That Carry Lyme Disease Thrive?

Ticks that carry Lyme disease are active year-round and can survive in below-freezing temperatures, although their peak season of activity begins in April and runs through September. During this time, the hungry nymphal tick (about as small as a poppy seed) actively seeks a host, and its bite poses the greatest risk.

Ticks generally live two to three years and have a four-stage life cycle. The four stages of their life cycle include egg, larva, nymph, and adult. 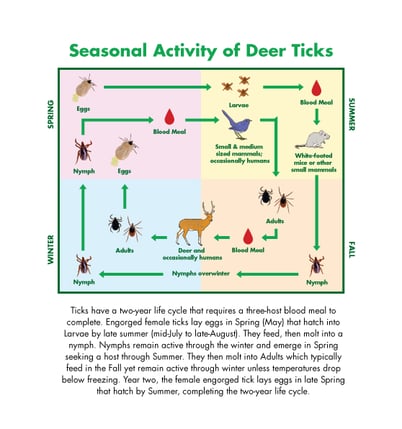 TICK LARVA: The tick larva is about the size of the period at the end of this sentence. They are almost impossible to find on your body but have not been proven to transmit tick-borne illness.

TICK NYMPH: The nymph is the size of a poppy seed. Nymphal ticks cause the majority of Lyme disease infections in people. Because of their very small size and painless bite, these ticks are generally not detected. Nymphs are most active in the late spring and summer months.

ADULT TICKS: Adult ticks are roughly the size of a sesame seed. Due to their small size and flat shape, they can be difficult to find on your body. Adult ticks that carry Lyme disease feed and mate primarily on deer. You may also find adult ticks on dogs, horses, and domesticated animals.

Where Are Ticks That Carry Lyme Disease Found?

Ticks that carry Lyme disease can be found anywhere their hosts live, in short, anywhere in the world. They prefer moist shady areas. The phrase “deer tick,” the name commonly used for the species of ticks that carry Lyme disease, is somewhat of a misnomer. Although deer are important as reproductive hosts in the lifecycle of these ticks, other vertebrate animals actually infect the ticks with disease organisms — not the deer. These animals include white-footed mice, chipmunks, shrews, several species of ground feeding birds (American robin, finches, wrens, bluejays, etc.), and many other small mammals. Lyme disease ticks can be found in:

How Can I Prevent Bites From Ticks –– and Lyme Disease?

You can keep yourself, your loved ones, and your pets from encountering Lyme ticks with a few easy, Be Tick AWARE prevention steps:

Learn more about preventing encounters with ticks that carry Lyme disease on our prevention page.

See below for more information on ticks and Lyme disease.

If you find a tick, it is important to send it to a tick testing lab to test for pathogens. Get our list of labs.

Get a list of labs that perform Lyme disease tests for patients.

How To Remove A Tick

If a tick is attached to your skin, don’t panic. Learn the proper tick removal technique here.