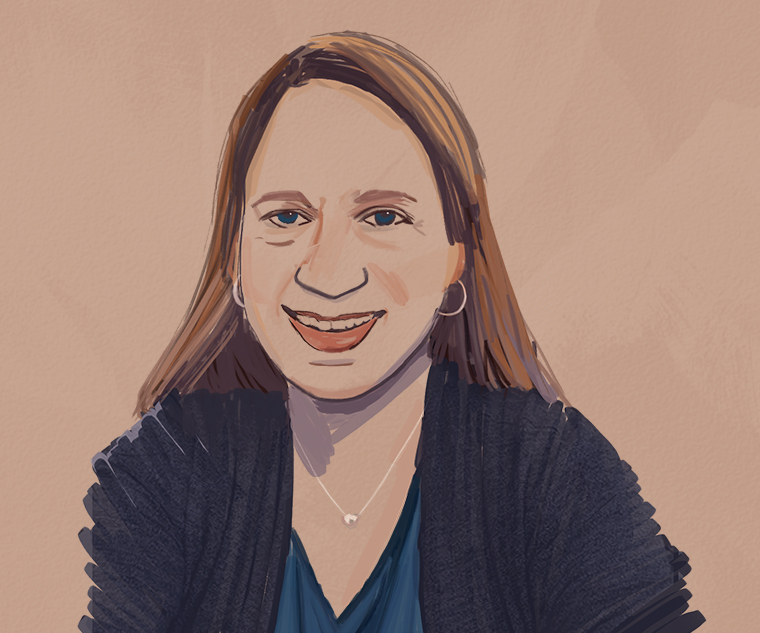 I wanted to be in medicine since I was a little girl (around 6 years old). As a physician, you get to be in the room at really important moments in people’s lives. Medical training is long, but after a while, you get the hang of clinical medicine. Intellectually, research allows me to look for that next challenge. As a physician, you help that person right in front of you, and for me, as a pediatrician, that’s children. As a researcher, you can generate knowledge which can inform other clinicians so they can take better care of children. I love thinking of the questions and doing the research to answer those questions…this work keeps me enthusiastic and invigorated. I come home from a late emergency department shift and I’m excited enough about what I’m doing that I get back to the task the next day.

Between being a mom of four, a doctor and researcher, the amount of time I have for personal hobbies is pretty scarce. Growing up, I spent my summers in Maine at overnight camp, and now my own children go. I stay involved as the camp doctor. I’ve been to camp thirteen summers, the first seven as a camper and counselor and now in the health center. There’s something about camp that grabs your heart and keeps you. Camp gives kids that inner strength to persevere, which is important in this hectic world. As camp didn’t open last summer due to COVID19, we are looking forward to returning this summer.

Did you have any mentors or other scientists who inspired you?

Of many amazing mentors that I have had, one person stands out in particular – Dr. Nate Kuppermann, at UC-Davis. He’s an emergency room physician, a accomplished investigator and a recognized leader in the field of pediatric emergency medicine. He has led many impactful studies that have improved care of children. He has inspired me to conduct high-quality studies to generate the knowledge to improve care for children. We met working on a research project two decades ago while I was still in training. Dr. Kuppermann’s mentorship was crucial as I launched my career as a clinical investigator.

Medicine works on an apprenticeship model, with a relatively well-paved path to becoming a physician. A career as a researcher is sometimes more forge-your-own path. You have to figure out what questions are worth answering, how you will do it in a rigorous way, how to build your team, how you will fund it. Now as I am further along in my career, getting a junior investigator excited about research is particularly rewarding.

If you were hosting a dinner party, which scientists or non-scientists, living or dead, would you invite, and why?

I’d love to meet Barack and Michelle Obama, because I’m so inspired by what they have done. I’d want to listen to everything they’d say, so I’d want to keep the party small One other interesting addition to this dinner party would be Maura Healey, the Massachusetts state attorney general, an incredibly well-spoken advocate doing amazing work for the underserved.

These are people who speak for those who may lack a voice, and you find them interesting, you respect them and maybe this feeds into your own thinking. As you know, children were the original Lyme disease cases, and they’re a large portion of annual cases. Who’s there to speak for them? It seems that you’re very interested in advocating on behalf of those who don’t have the voice.

People advocate in different ways, and as a physician scientist, I advocate by informing, and by generating knowledge. High-quality evidence is the best way forward. Particularly in Lyme disease, gaps in knowledge have fed controversies. And there are knowledge gaps in every area of medicine. As a researcher, narrowing these gaps can provide effective advocacy for children.

You could have picked another area to study. Why Lyme disease?

As a young investigator, I was interested in distinguishing between bacterial and meningitis. As bacterial conjugate vaccines became widely available, bacterial meningitis became uncommon. However, in Lyme endemic areas, clinicians then worried about Lyme meningitis as well other presentations of tick-borne infections such as facial palsy and swollen knees. Recognizing clinical uncertainty, I became interested in informing initial clinical decision-making for children when Lyme disease is considered.

I had an idea – a pediatric Lyme biobank, which I was passionate about, but needed financial support. I knew GLA funds high-quality research, so I was hoping we’d be a match. I met your team and I applied for a grant which was reviewed favorably. After a pilot year of funding, I was awarded a larger grant to support the Pedi Lyme Net infrastructure. What drew me to GLA is the shared commitment to improving knowledge around Lyme and other tick-borne diseases, and doing it in a high-quality evidence-based way.

If I could lead a study without budget constraints, I would like to evaluate available technology to develop a highly accurate Lyme diagnostic. The “big” study that I would love to do would be to take the samples we collect from children and perform multiple next generation diagnostics, RNAseq, proteomics, metabolomics etc., to perfor, rigorous head-to-head comparisons. I think there’s consensus that improved diagnostics to rapidly identify true infections, could improve Lyme disease care overall.

Did you have a big “aha” moment when you realized something very important for your research?

I learn something from every study that I have been involved with. A decade ago, I was a collaborator on a study of young febrile infants. While most infants have viral infections, a minority have serious bacterial infections which require prompt recognition and treatment. We enrolled infants, collecting clinical characteristics linked with blood samples. Being part of that study – realizing the power of collaboration in a focused area – led me to thinking about a pediatric Lyme disease biobank. In the emergency department, we see right at the beginning of their illness. Some children will have Lyme disease and some will have other illnesses. With this in mind, I founded Pedi Lyme Net a collaborative pediatric research network which has grown from three to eight centers and more than 3000 children enrolled to date.

Dr. Nigrovic was interviewed by GLA in December via zoom. The interview has been edited and condensed for clarity.