Can you imagine a life where you wake up at least one night a week with violent food poisoning? No, I’m not talking about traveling through Southeast Asia. What I’m describing is actually my life. I’m not being dramatic. You see, I have Mast Cell Activation Syndrome, a poorly understood immunologic condition which I developed as a result of chronic Lyme disease and other tick-borne co-infections. This causes me to have extraordinarily overactive histamine reactions to basically everything. Think of my mast cells as overreactive, neurotic Jewish mothers (I can say this because I am one).  In order to keep these melodramatic mast cells of mine in check, I’m on an extremely restricted diet. No dairy, no gluten, no soy, no grains, no sugar, no fun. And yes, this also means no alcohol. Two insane kids, a bipolar dog (still awaiting an official diagnosis), and no vino for momma. I eat a diet consisting of meat and eggs in order to keep my Lyme and mast symptoms at bay. I know, it sounds extreme, and it is. What people don’t understand is that It’s a matter of being able to breathe and not have my throat close up on a daily basis.

The middle of the night episodes are wretched. I have them almost weekly now. They usually happen sometime between midnight and 3AM. I go to sleep most nights dreading what might be. Never mind the fabulous dreams I’m interrupted from. And then BOOM, I’m jolted awake by a sickening sensation. I rush to the bathroom in a cold sweat with uncontrollable shivers wracking my body. Sprinkle in some heart palpitations, muscle spasms, near-fainting, a feeling of doom, shortness of breath and violent gastrointestinal distress. There you have a typical mast cell attack. Sometimes it’s over fast, a violent episode that leaves me bone-tired and depleted.

At other times it lasts longer and is accompanied by terrifying panic attacks. These attacks are often followed by a horrifying feeling of depersonalization, a feeling of complete disconnection from reality; it’s like I’m outside my own body looking in. There were times when I was convinced that the men in white coats wielding giant sedative-filled syringes were coming for me (which, now that I think of it, sounds appealing in the midst of an attack). The morning after an episode like this, I generally awaken weak-kneed, woozy and reeling from the terror in the night. I often walk around feeling quite shell-shocked the rest of the day.

The good thing is that I at least now know why these episodes occur. For the longest time, I just assumed I was dying or going crazy. Other times, I was convinced I was dying and would get really annoyed that my lifeless body was going to be found on the bathroom floor, not even wearing decent pajamas. Laying between hurls on the cold hard bathroom floor shivering and twitching, I would silently berate myself for not investing in that silk kimono. But now at least I know I am neither dying nor going crazy.

No one, including my closest friends, have any idea that this happens to me.  Those who do know that I’m sick often remark at how good I look. (Let it be known that it takes copious amounts of concealer and plentiful bronzer to hide the carnage of really bad nights and produce this effect.) I don’t like to tell friends or family members about my illness because its hard to relive the terror of the episodes, and it’s just easier to pretend that I’m normal and that everything is peachy.

Sometimes I’m afraid to talk about it. It’s like there’s a giant dam holding back the pain and fear and sadness that will break and come spilling out. My husband is really the only one who knows the extent of my nighttime woes because he is the one who wakes up when my shivering body and chattering teeth shake the whole bed. He is the one who touches my forehead (he always assumes I have a fever) and brings me water when I’m too weak to do it myself. He is the one who bears witness to the pain. The girl who walks around with the perfectly contoured cheeks and big smile is who the rest of the world sees.

Naturally, I don’t walk around feeling sorry for myself. From time to time I allow a day for self-pity, but I don’t allow myself to dwell there. 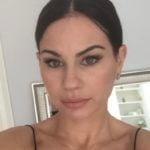 Marisa is a consultant for a cosmetics company and has her masters in clinical social work. She is Lyme warrior who is fighting the good fight and won’t back down. She is a mother of two spirited children and an even more spirited dog. She enjoys yoga, researching skin care ingredients, and spending quality time with family and friends.