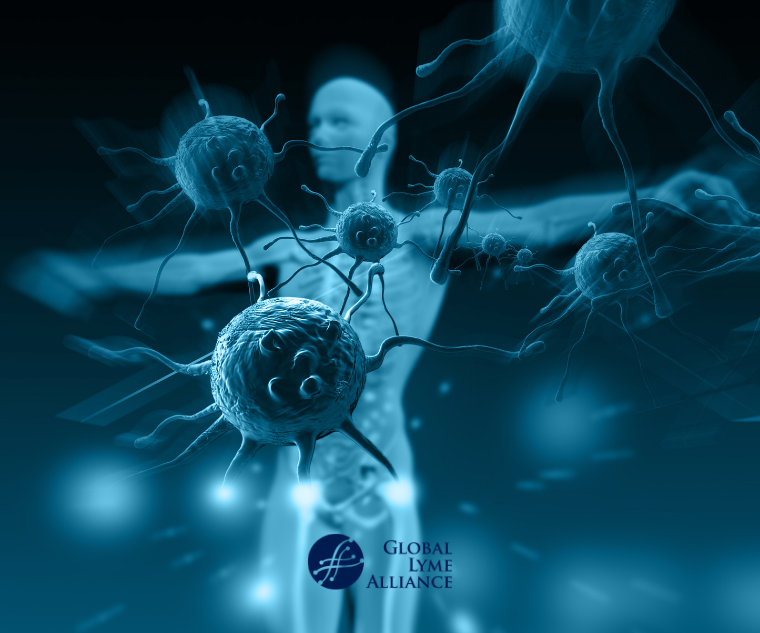 In the Covid-19 pandemic era, survival and recovery are on our minds. It’s become recognized that some patients recover quickly from Covid-19, but others may take months or possibly longer to feel better. Sound familiar?

The Lyme disease community has a long experience with lingering, debilitating symptoms.

It’s possible that an abnormal immune response does not shut off even after the infection has been contained, driving continued symptoms. Looking closely at certain steps of the immune response during the earliest days of infection might help to explain the slow or incomplete resolution of symptoms later on.

A GLA-funded research group at Johns Hopkins University, co-directed by Drs. Mark Soloski and John Aucott established a groundbreaking study that has made it possible to study these subtleties. The Study of Lyme Immunological and Clinical Events (SLICE) has collected careful patient histories and biospecimens from Lyme disease patients from the first clinical visit through treatment and two years of follow-up. Analysis of these samples, and comparisons with healthy controls, can identify critical immune responses during the course of disease. In addition, comparing samples from Lyme patients who recover, with those who do not, may help to identify important biological processes that are important for symptom resolution.

Dr. Soloski, who also serves on GLA’s scientific advisory board, and his team analyzed the proteins in their patients’ blood serum, and made important observations about acute Lyme disease patients. Among these, they showed elevated inflammatory proteins like C-reactive protein (CRP) and serum amyloid A (SAA) during early infection, which are part of the normal response to infection. In follow-up studies of long-term patients, they identified elevated blood CCL19 as an early indicator of increased risk for prolonged symptoms. Patients whose early blood samples had increased CCL19 above a certain threshold had greater risk of developing PTLD than those below it.

CCL19 is a protein that recruits subsets of T cells and B cells to the sites of infection, and persistently elevated levels are suggestive of continued inflammation in localized sites. One source of CCL19 is dendritic cells (DCs), the sentinel cells that are present in the skin and tissues. These are among the first to encounter infecting pathogens. For Lyme disease, which begins with a tick bite, DCs would be the first to sense the invading bacteria.

These initial patient observations paved the way for more in-depth studies of cultured DCs in controlled lab conditions. Dr. Maria Gutierrez-Hoffmann, working with Dr. Soloski, grew DCs and exposed them to live B. burgdorferi, the bacterial cause of Lyme disease. This study, published recently in Frontiers of Medicine, mimicked the real-life scenario of DCs encountering Lyme bacteria in the skin.

Figure 1. Dendritic cells, which present self and foreign antigens to immune cells, may play a key role in the immune response to B. burgdorferi, the bacterial cause of Lyme disease. Immature DCs are phagocytic, engulfing pathogens and digesting them. Mature DCs produce pro-inflammatory proteins and cytokines that recruit other immune cells, such as CCL19 and CCR7. ©2021 Global Lyme Alliance

DCs are professional antigen presenting cells (Figure 1). Upon encountering pathogens, they engulf and digest them. Then, they display protein fragments of the pathogens, or antigens, on their surface, alongside proteins called MHC molecules. The MHC molecules act like a scaffold that orients the MHC-antigen complex so that immune cells can “see” foreign antigens and then react by alerting other immune cells, such as T cells, to react (Figure 2). These can be either directly cytotoxic or killer T cells, or those whose function is to co-ordinate other immune functions, like antibody production. Inflammatory proteins like CRP and SAA, which are elevated during early Lyme disease, are stimulated, as well as cytokines directing other immune functions.

But DCs also constantly display our own self antigens on MHC proteins, and our immune cells do not react. This mechanism is called tolerance, and it’s important in preventing our immune systems from acting against us. Tolerance is what stops autoimmune disease, because our bodies learn what is self, and what is not.

Dr. Gutierrez-Hoffman’s work showed that when DCs were cultured with B. burgdorferi for 8 or 24 hours, first, they increased the amount of HLA-DR that they expressed on their surface. HLA-DR is an MHC protein that presents antigens. So, this result indicates that the presence of bacteria caused DCs to ramp up their capacity to display antigens. In contrast, unexposed bacteria did not increase their HLA-DR.

Human proteins like endothelial cell growth factor, Annexin A2, and apolipoprotein B-100, were newly displayed by B. burgdorferi-exposed DCs. In Lyme disease patients whose arthritis is unresponsive to antibiotics, these self proteins were previously identified as targets of immune cells. The development of antibodies against these self proteins, an inflammatory environment in the joints, and the eventual presence of T and B cells targeting these self proteins could be a mechanistic continuum explaining an arthritis-like autoimmune reaction in these patients. But how this occurs still needs more research.

What’s clear is that there is more work to be done, to fully uncover the role of DCs in early B. burgdorferi infection. How they may be involved in setting up the immune system’s ultimate decision of self tolerance or inflammation after exposure to B. burgdorferi remains a mystery, but one that’s beginning to crack thanks to diligent research.