What Failure to Control Ticks in Uganda Teaches Everyone

Tick populations across Africa have negatively impacted many communities by carrying and spreading one of the most frequent bacterial diseases in Africa, tick-borne relapsing fever (TBRF).

In addition to infecting humans, ticks in Africa are known to spread disease amongst cattle, resulting in both agricultural and economic consequences. Uganda is one of the countries hardest hit by the presence of ticks and tick-borne diseases (TBD), with over 30% of the calf crop lost to TBDs  such as theileriosis, babesiosis, and anaplasmosis.  Farmers have used acaricides, pesticides that target ticks and mites, as a tool to combat the diseases they carry. But recently many farmers have been reporting more instances of acaricide failure.  Acaricide failure places a tremendous financial burden on the Ugandan farmers; not only does it lead to a high loss of their cattle to TBD, but the costs of the acaricides themselves account for about 90% of an average farmer’s total disease control budget, making non-functional acaricides a major budgetary loss for farmers. The frequent occurrence of acaricide failure has raised the possibility that certain ticks are becoming resistant to them.

A study conducted by Vudriko et al. in 2016 set out to uncover the reason behind the increasing reports of acaricide failure in Uganda.  Of the 54 farms tested, 94.4% of them had complaints of acaricide failure, which prompted questions about tick resistance as well as acaricide application methods. To address these questions, Vudriko et al. examined the acaricide application techniques used by farmers and also tested the tick larvae they found on the cattle for acaricide resistance. The results showed that 93.5% of the larvae population they tested was resistant to at least one acaricide. The resistant larvae were identified as Rhipicephalus genus ticks. This was the first study in Uganda to report the emergence of multi-acaricide resistant ticks. Ticks’ resistance to multiple acaricides increases the danger of cattle being infected with TBD, because these ticks can survive even a combination of tick-attacking techniques.

Vudriko et al. also found that many farmers were guilty of misusing their acaricides.  When certain acaricides started to fail, farmers often try to find a quick fix by mixing chemicals, and creating their own acaricide application methods. These farmer-created errors could be partially to blame for the dramatic rise in multi-acaricide resistance. When a mixture of acaricides is applied surviving ticks carry a gene that allow them to resist all of the acaricides in that mixture. After they reproduce, future generations of ticks, harboring the resistance genes, will be resistant to multiple acaricides. 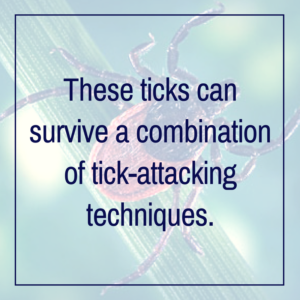 Tick-borne diseases are the number one constraint of cattle production in Uganda. Acaricide failure has been spreading through farms, causing more and more cattle to fall ill with disease, and costing farmers time and money. The development of multi-acaricide resistant ticks could have possibly been delayed or even avoided if farmers had not taken tick control into their own hands. Therefore it is important to educate farmers around the world on how to properly manage and control ticks. Since a large portion of the ticks are now resistant to current acaricides, alternative tick control options are needed.

Witnessing how tick-borne diseases have affected Ugandan cattle farming demonstrates the impact ticks can have on society. In addition to spreading tick-borne diseases to humans across the world, ticks that prey on cattle have implications not only for the food supply but for economic growth in many countries.

The case of acaricide failure on farms in Uganda is a reminder of the importance of tick prevention, and following strict protocols when controlling tick populations. As climate change continues to make an increasing amount of habitats suitable for tick growth and reproduction globally more farms will start running into the problem of tick-borne disease among their cattle. Further research on this topic is necessary to help farmers and those of us who rely on their food around the world.