Five runners gave new meaning to the term “Lyme warrior” on Sunday, November 4, 2018, as they completed in the largest marathon in the world—the TCS New York City Marathon.

Representing Global Lyme Alliance’s first team entry as an official charity partner in the marathon—and the first for any Lyme organization—were Jesse Ruben (team captain, pictured above), Annie Cunningham, Thor Kirleis, Nani Luculescu, and Dan Gautreau. These amazing warriors not only entered, trained for, competed in and finished the 26.2-mile race; while doing so they raised more than $21,000 to support GLA’s mission, and ultimately, help patients.

Jesse, Annie, Thor, Nani, Dan, and Annie each have a personal Lyme story.

Jesse, who personally suffered from Lyme’s devastating symptoms, runs the marathon in part to prove that he can. “If you had told me a couple of years ago that I’d be training for the marathon, there’s no way I would’ve believed you. I was spending most of my time in bed. My fatigue was unbearable.” I was fortunate enough to find a treatment that was effective and to be in remission— and that’s a miracle.” 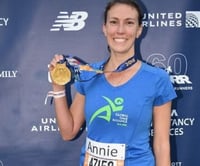 Annie spent two years fighting the effects of Lyme. She is determined to spread awareness about the threat of Lyme to friends, family and “anyone who will listen.” Her goal in running the marathon was “simply to finish and to maintain my health all while raising awareness and funds for an amazing and vital organization!” 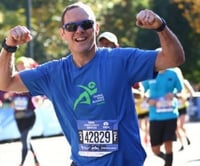 Thor has been fighting Lyme for the past six years. He has run over 110 marathons in his 30 years of running, but Lyme nearly ended all that— to put it mildly. Since contracting Lyme disease (and several co-infections), he has gone on stretches where he could not run even one full stride. He constitutes an example to us all, as does entire Team GLA, about what it means to overcome adversity. 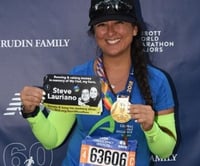 Nani ran in memory of her father who lost his battle with Lyme-induced ALS in 2013. Running with Team GLA to raise money and awareness for Lyme was especially important to her. It was, in fact, one of her dad’s final wishes before he died. She says, “for me to tell others about Lyme so they wouldn’t have to suffer as he did.” 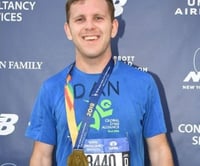 Dan was diagnosed with Lyme disease when he was 21. “While my symptoms have subsided in recent years,” he said, “there is so much to be done to lessen the impact on those affected.” His hope was that by running on behalf of GLA, he could fundraise and spread awareness to combat Lyme and other tick-borne diseases. Among all the team members, Dan’s time was the fastest, 3:30:58.

Please join GLA in giving these five amazing warriors a marathon size thank you for their tremendous achievement. To show your support, donate to Team GLA today.