Forget Ebola, Sars and Zika: ticks are the next global health threat

Since the beginning of our species we have been at war. It’s a continuous, neverending fight against the smallest of adversaries: armies of pathogens and parasites. As we have developed new ways to survive and stop them, they have evolved ever more complex and ingenious methods to thwart our efforts.

Humans have faced numerous attempts to challenge our dominance on planet Earth , and from the Black Death to the Spanish flu, we have weathered them all. However, since the start of the 21st century, with its trend towards global interconnectedness, these onslaughts are ever-increasing. In the past 17 years we have battled Sars, the Ebola virus, Mers, and more recently the mysterious mosquito-borne Zika virus. These diseases seeming to appear from nowhere and rapidly ravage our populations. One commonality is that they almost always originate in animals before jumping across to people, and few parasites are as good at jumping between animals and people as the tick.

Ticks could be best described as the used syringes of the natural world due to their promiscuous feeding habits. Most ticks go through three stages in their lives and feed on a different host at each stage, whilst simultaneously collecting hitchhiking microbes in their blood meals. Ticks also have one of the widest distributions of any vector on Earth – they can be found on every continent, including frigid Antarctica. This combination of ubiquity and a bad habit for accumulating pathogenic microbes make ticks some of the most dangerous vectors on the planet.

So why ticks? And why now?

Partly, it’s because ticks have been understudied for so long that only recently have we begun to realise just how much they affect our health. It took until 1975 for the infamous Lyme disease even to be formally described, and today the list of microbes found within ticks grows ever larger every year as numerous new species are discovered. 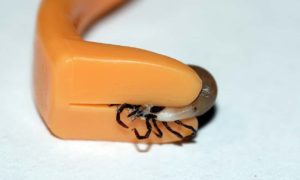 An engorged tick removed from a host. Photograph: Astrid860/Getty Images/iStockphoto

Changing ecosystems are also forcing ticks into closer contact with humans. Perhaps the most immediate changes are being driven by land clearing, which is forcing wildlife into closer contact with humans; with wildlife come ticks and the diseases they carry. Climate change has also been implicated: as the climate gets warmer, some ticks are expanding their ranges into places where cool winter temperatures previously limited their distribution. Geographical boundaries are also being eroded as rapid transport links environments which were previously isolated from one another. This presents easy opportunity for ticks to cross borders and spread to new habitats they may not have previously occupied.

In short, our manipulation of the environment has set the stage for a tick-driven health crisis.

Ticks can carry an extremely wide array of human pathogens, including bacteria, viruses, and protozoa. Within the long list of human ailments caused by ticks, several dangerous diseases stand out.

While the recognition of Lyme disease has led to a greater study of the bacteria which cause it and more frequent testing for patients, it has been a double-edged sword, as its notoriety has overshadowed equally important diseases like tick-borne rickettsiosis (TBR). TBR is caused by a number of different bacteria distributed across the globe. Unfortunately, TBR often presents with signs and symptoms similar to Lyme disease, such as rashes, joint and muscle pain, and fatigue. Although deaths are rare when TBR is treated with antibiotics like doxycycline, when the disease is incorrectly diagnosed or adequate medical infrastructure is lacking, mortalities can still occur.

Babesiosis is an emerging tick-borne disease caused by a protozoan called Babesia, a species related to the microbe which causes malaria. The disease is rarely tested for by doctors and the global levels of human infection are unknown, although some researchers believe that they may be much higher than present rates of diagnosis indicate. Infections can be highly variable, with about a quarter of infected adults showing no signs of the disease, while others will die from the infection. In truth the disease is still poorly understood in humans, which is compounded by the fact that several species of Babesia cause the disease and the signs and symptoms can be wide-ranging and often include fever, fatigue, anaemia, and nausea – all common features of other illnesses. 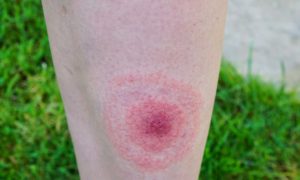 The distinctive “bullseye” marking caused by a bite from a deer tick. Photograph: anakopa/Getty Images/iStockphoto

Crimean-Congo haemorrhagic fever (CCHF) is perhaps the most terrifying disease spread by ticks, as there are no treatments available, and mortality rates can be as high as 40% in infected humans. To put it into perspective, that mortality rate is similar to untreated cases of Ebola or the bubonic plague. The World Health Organisation views CCHF virus as having a high chance of causing human disease epidemics and has accordingly directed considerable funding towards finding a treatment, although to date none have been developed. The wide distribution of tick vectors capable of spreading the disease coupled with the ability of common domestic animals such as sheep and cattle to maintain the CCHF virus in their blood at high levels means the potential for CCHF to expand into new regions like Europe is highly probable.

While only discovered in 2009, SFTS virus (severe fever with thrombocytopenia syndrome) has sparked widespread fear through much of Asia, especially in Japan where 57 people have died of the disease since 2013. Signs of the disease can range in severity from relatively mild, like fever and diarrhea, to severe, which can include multiple organ failures. The fact that the epidemiology of the disease is so poorly known makes predicting and controlling its spread difficult. It is also known to be carried by at least two cosmopolitan tick species which are spread throughout the world from the UK, to the US, and even Australia. That might sound bad enough, but things are even worse: although the disease typically gets to humans via a tick, from there it can spread to other humans or their pets and back again into ticks who feed on infected hosts.

Ticks are ubiquitous, dangerous, and are coming into ever greater contact with us. We must recognize that the next public health crisis may come from our backyards rather than a remote equatorial jungle in Africa or Asia.

Zoologist Mackenzie Kwak’s research focuses on the biogeography, systematics, and ecology of Australasian ectoparasites. She writes for the science blog on The Guardian, where this blog first appeared.