Getting Involved: When Your Intention Says Yes, But Your Body Says No 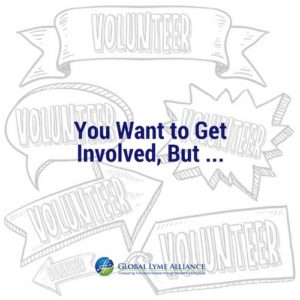 You’re feeling better and want to get involved, but your chronic illness has other plans.

Last January, a friend asked if I had attended a recent local Women’s March. I shook my head sheepishly. “But that doesn’t mean I don’t care,” I quickly said.

This is an exchange I’ve had many times. I often feel like I need to explain the difference between wanting to get involved and being able to. No matter your political leanings, the last few months have been unsettling for everyone. There have been so many causes and marches and ways to become engaged that even the most energetic of us has felt overwhelmed. For those suffering from Lyme and other debilitating illnesses, that feeling is amplified by the fact that involvement in daily life, let alone activism, is often too much to handle. When you are too physically or neurologically overtaxed to cook meals, talk on the phone, or read books, civic engagement seems out of the question. And that can lead to feelings of guilt, shame and selfishness.

Wanting to watch TV or hang out with friends and not being able to do so is frustrating. Wanting to get involved in something bigger than ourselves and not being able to takes those feelings to a new level. I remember, when I was completely bedridden, someone said to me, “Why don’t you volunteer, to get involved in something besides being sick?” What that person didn’t know was that if I could have volunteered, I certainly would have. If I could have worked part-or-full time, I would have. If I could have done anything that made me feel connected to the world at large, engaged in my community, or occupied with something bigger than my illness, I would have. But I could not.

I had to get well before I could do any of those things. It comes back to the old oxygen mask analogy: you have to secure your own mask on an airplane before helping someone else with theirs. This rule feels counterintuitive because our desire as humans is to help others first. But we can’t help anyone if we’re not breathing. Having Lyme or any of its co-infections is like being without the oxygen mask. There is very little we can do for ourselves, much less others without it.

Once we are breathing again, though, we still may not be able to participate in events and activities the way we’d like, but that doesn’t mean there aren’t other ways. Though I am no longer housebound, I have limitations that prevent me from participating in events like political marches. Big crowds and large noises grate on my neurological symptoms. Standing for hours tends to make me tired and cranky. No matter how much I care about a cause, I have to set boundaries on involvement to protect my health.

Last January I asked myself, if I want to make a difference but don’t have the capacity to do so in a traditional way, what other ways are there?

In the world of the internet, it turns out, there are many ways to get involved right from your couch. I discovered an online Disability March, which, as described on its website, is “a caucus of the Women’s March open to persons with disabilities and their advocates. The group began as a ‘virtual’ march of disabled activists who could not take part in the physical Women’s March in January 2017 but nevertheless  needed to have their voices heard, and has evolved to allow disability-rights activists to come together to share opportunities for the members to engage in various aspects of activism related to disability rights and healthcare.” There is also the Facebook group “ACA Stories: How Obamacared for Me”, which is a space for stories about the positive ways in which Americans’ lives have been touched by the Affordable Care Act.

If you care about these particular issues, you can share a quick story with one of these groups, and know that you’ve helped to make a difference. If you can’t type, how about asking a friend to post for you, or to help you research other causes and groups that you can participate in virtually? Whatever it is you want to get involved in, it’s likely an online group or app already exists to fill the need.

And if you’re not yet well enough to get involved, be gentle with yourself. You are currently involved in the most important cause of your life: reclaiming your health. Once you’ve done that, you can broaden your reach. In my view, there’s no better activist than one who has been in the trenches. If you’ve fought for your life, you can fight for anything.