The repetitiveness of living with Lyme disease can feel like Groundhog Day, over and over again.

When I was studying in France, I had dinner with my landlady on Groundhog Day. Except, as I describe in my memoir Et Voilà, “there are no groundhogs in France, so February 2nd is instead marked by a national celebration of crêpes.” As we sat down to a decadent meal of savory and sweet crêpes, I tried to explain to my landlady the tradition of Punxsutawney Phil. She gave me a look that said, you must just sound crazy because you don’t speak French well.

Now that I am fluent in another language—Lyme disease—I have similar trouble explaining myself. Because so many of our symptoms are interior, Lymies have difficulty getting healthy people to understand how we’re feeling. One aspect that’s particularly tough to communicate is the repetitiveness of the disease: days that roll into one; daily medication routines; obsessive thoughts; word and song iteration. Lymies tend to feel like Bill Murray in the movie Groundhog Day, when his character discovers he is stuck living the same day over and over.

Unfortunately, our problems don’t resolve in the span of a two-hour movie. Instead, we find ourselves playing out the same scenes day in and day out. When I was at my sickest, I’d go to bed hoping I’d feel a little better in the morning, and wake up feeling either exactly the same, or worse. Because of Herxheimer reactions and the ebb and flow of Lyme treatment, the worse-before-better phenomenon became frustratingly common. With each new day, I didn’t know if I’d move forward, stay put or take two steps back. Rarely did I take a step forward, and even when I did, it would be quickly followed by one or more steps back.

Most days I’d wake up feeling like I hadn’t slept. Sometimes I was exhausted from eight or more hours of harrowing nightmares. I’d want to roll over and go back to sleep, but couldn’t. I had to stick to a very specific medication routine. Each morning I’d attach a bolus of antibiotics to my Peripherally Inserted Central Catheter (PICC line) and watch it drip for an hour while I ate breakfast. Due to dietary restrictions, that breakfast didn’t vary much. Afterwards I’d swallow at least ten pills of various shapes, sizes, and colors, then eat a spoonful of peanut butter, the fatty food necessary to absorb a glowing anti-malarial syrup often referred to as “liquid gold”.

After breakfast I’d try to send a few emails, though that was dependent on how stiff my fingers were and how thick my brain fog. Some days I could write paragraphs, and eventually wrote pages of my book. Other days I couldn’t type or hold a pen, and couldn’t concentrate on even one sentence. On those mornings I’d retreat back to bed, sometimes dozing off but often just lying there, listening to the clock tick.

This went on until lunch, when I’d break for another meal and more pills, and then I’d try again, often unsuccessfully, to nap in the afternoon. I’d get up in the evening when my family came home and would try to sit at the table long enough to hear about their days, which had variety. They did different things at work and school. They had meetings in different locations. They had coffee with different people. They meant well when they asked me, “And how was your day?” but the question made me cringe, because I always gave the exact same report. After awhile, I was able to drive myself to appointments, meet friends for lunch, and tutor high school students in French. But for a long time—years—my days were very, very quiet.

That’s not to say my brain was quiet. Though I didn’t give it much fodder since I couldn’t read, watch TV, or focus on audiobooks or music, the spirochetes in my head latched onto a time my brain could do all those things. Each day I’d wake up with a song in my head. There was no rhyme or reason to which song my brain picked; when I woke up it was just there, playing over and over and over as a perpetual soundtrack for the day.

Everyone knows how annoying it is to have a song stuck in your head. But imagine what it’s like when you’re bedridden and can’t go out into the world and do something to make you forget the song. Imagine what it’s like when your head already feels like its filled with molasses, when you are exhausted but can’t sleep, when you have nothing to do but lie there and “listen”.

Sometimes, it wasn’t just one song. As the day went on my brain would add to its repertoire, so that I’d have three or four tunes playing at once. This cacophonous mashup made me want to shake my head and scream.

It wasn’t just songs that were stuck in my head, either. Ideas played on repeat, too. Many Lymies describe having obsessive thoughts. For me, it was like I had a voice in my head narrating lines from my book or reactions to conversations I was a part of. It would read those lines again and again. The needle in my head was stuck. My world was not quiet; it was maddeningly repetitive.

Now that I’m in remission, I can tell when I’m having a flare-up, because I start thinking of everything twice. It’s not a conscious choice. It’s just the place my brain goes when its overtired. That’s a sign for me to rest, to have a neurofeedback session, to get some cranial sacral therapy. No matter how well I’m doing, I still always have a song in my head. Always. Right now it’s “Payphone” by Maroon 5. I’m not at a payphone—haven’t used one in years, in fact—but that’s where my brain is. Luckily, my daily songs play in the background now, because so much living is happening in the foreground. The songs and the occasional word iteration are bearable, because in general, I am taking daily steps forward. I am even back to eating (gluten-free) crêpes.

I lived the movie version of Groundhog Day for a long time. I promise you, with proper treatment the long winter does eventually end. Here’s hoping that Punxsutawney Phil will not see his shadow this week, and you will have an early spring. 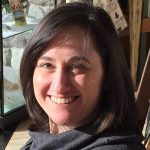