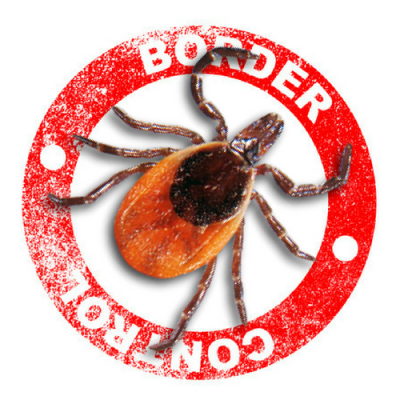 With the election of a new President in the United States, the heated rhetoric about reinforcing America’s southern border has ignored the critical need for international dialogue and mutual cooperation to control the spread of infectious diseases. Infectious pathogens do not respect national borders. As we have learned from Zika virus, both humans and animals can facilitate disease spread between countries, making the border areas between countries an important place for disease control. The U.S.-Mexico border zone can be considered a hotspot for diseases acquired from animals, such as Lyme disease and other tick-borne illnesses, whose spread may be promoted by factors including climate change, poverty, and migration.

A study conducted jointly by Mexican and American scientists found that Ixodes scapularis, the tick responsible for spreading Lyme disease, is present in the border area, and 45% of these ticks were infected with the Borrelia burgdorferi, the bacterium that causes Lyme. In Mexico, a survey of blood samples revealed that 6.4% of people living near the Texas border had antibodies for Lyme bacteria, while other regions in Mexico reported only 1.1% seropositivity. This region has a higher rate of Lyme disease and other tick-borne illnesses than anywhere else in Mexico, and reasons for this could include the high traffic of host animals, such as cattle and white-tailed deer that move through the area. Tick-borne diseases may also become more prevalent in this area due to climate change. Variables including rainfall, invasive vegetation and increasing temperature are shifting the habitat range of disease vectors like ticks as well as their mammalian hosts, and it’s speculated that Lyme disease incidence will increase in this border area. Poverty, which worsens difficulties in obtaining timely health care information and treatment, is not solely a Mexican problem: 15.9% of Texans live below the poverty level.

However, preventing the spread of disease to humans is not the only focus of tick control in this region. Rhipicephalus microplus is a species of tick usually found in sub-tropical regions, that often transmits Babesia bovis, a parasite that causes cattle fever. This infection causes potentially fatal anemia and wasting in cattle, and leads to devastating economic losses. The parasite is related to a similar tick-borne parasite, Babesia microti, that infects and sickens humans.

In the early 1900’s, the United States established the National Cattle Fever Tick Eradication Program, which eliminated virtually all cattle fever ticks. Still, these ticks remain abundant in Mexico, and to prevent their movement over the border, the United States Department of Agriculture created a Tick Eradication Quarantine Area (TEQA). Within the TEQA, stray, illegal and US-bound animals are inspected. In order to export cattle out of the quarantine area, they must be treated with acaricides, which are chemicals that kill ticks. Although this method has been very effective in keeping cattle fever out of Texas, the excessive use of acaricide has caused the ticks to adapt and become resistant.

A study by Busch et al. (2014) took tick samples from various locations in Texas and tested their resistance to multiple acaricides. These tests revealed that 15 out of 47 of the collections contained ticks that were resistant to acaricides. Eleven of 15 acaricide-resistant populations were collected outside of the TEQA, indicating the ticks were not contained. The authors concluded that despite the extensive actions to inhibit the spread of ticks into Texas, there were two dispersal mechanisms that led to these tick infestations. The first was frequent short-distance dispersal of acaricide-resistant ticks despite the precautions taken at the border. The second mechanism was the less frequent, long-distance dispersal from the TEQA, possibly mediated by humans, or carried on other host animals such as white-tailed deer.

Acaricide resistance is a major threat to the mechanisms that are currently in place to control tick populations. A study by Stone et al. (2014) examined the genetic mutations in ticks that are associated with acaricide resistance. They identified three single nucleotide polymorphisms that led to resistance in the sample population. Many communities on the Texas-Mexico border are concerned that their cattle will become infected with cattle fever, and without acaricides there are few weapons to battle the ticks. Studies like this will provide the knowledge necessary to enhance our tick control programs and prepare for future problems.

Protection of human and agricultural animal health will need research and testing on both sides of the border, as well as information sharing and collaborative implementation of vector control. In order to achieve this goal, it is necessary for the U.S. and Mexico to work together to stop the spread of tick-borne diseases.