Lyme Moms: We Salute You 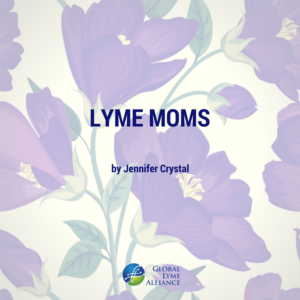 When I was undergoing treatment for Lyme, I attended a local support group. Most of the members were parents. Some were trying to raise families while battling the disease. Others were healthy but were raising children who had tick-borne illnesses. Some of those children had been infected in their own backyards. A few families had more than one child with Lyme. Just as one child would start to get better, another would fall ill; for those families, beating Lyme was like playing dominoes. Listening to their stories made me realize how much more complicated their battles were than mine. Every Lyme patient suffers, but Lyme families face additional challenges.

I realized it is the mothers of Lyme kids who are often making the biggest difference. They’re on the front lines fighting for awareness, research, treatment, and personal validation. They’re fighting for recognition of an illness that is often dismissed as nonexistent by schools and pediatricians. I have heard horror stories of parents being questioned by school officials as to whether their child was truly sick. One mom said the Department of Children and Family Services had threatened to take her daughter away because the child had missed so much school. It’s hard enough for these kids to miss out on the academic and social events of their age. It’s hard enough for their parents to understand their children’s symptoms and get them proper treatment. But to then have the factual basis of the crisis questioned!

Even parents who find ticks or rashes on their children and seek immediate treatment are questioned by pediatricians who aren’t Lyme literate. A friend who found an embedded tick on her two-year-old son was told by the pediatrician not to even bother having the child or the tick tested, but to “wait and see” if the child developed symptoms. Lyme symptoms can be nebulous—and difficult to express, especially by a two-year-old—so waiting to see would have put the child at greater danger than giving him prophylactic antibiotics. Fortunately, the mother was well-informed and she insisted her son be given treatment.

These mothers persist because they love their children. As Staci Grodin, Vice Chair of the Global Lyme Alliance and a Lyme patient herself says, “Education is key. We must educate moms and kids on prevention so months and years don’t go by with any child suffering. Educating schools, camps, and other places where our children learn and play is also critical to keeping everyone safe.”

It isn’t easy for parents to fight this good fight when they’re the ones who are sick. But many like Grodin do. She was bitten by a tick in college and it was a couple years before she was diagnosed with Lyme and its co-infections. She’s wrestled with ups and downs since then, all while raising a family and working to advance Lyme education and awareness.

Some parents want to join this fight, but can’t because they are completely bedridden. They struggle with feelings of guilt and shame when they can’t be involved in their childrens’ lives the way they want to, so the bulk of the parenting falls to the spouse. Other parents have to navigate giving equal attention to both healthy and sick children. Lyme doesn’t just wreak havoc on a body; it can also wreak havoc on a family.

There is also the question of getting pregnant while battling Lyme. Research shows that the bacteria can be passed to the fetus, so both the mother and the baby’s health are at risk. In the documentary Under Our Skin, one patient suffered miscarriages due to Lyme and the fetuses tested positive for the disease.

Grodin remembers, “When I got married and wanted to become a mom in 2002, I weighed my options very seriously about what would be the best way to ensure the baby didn’t get Lyme and the other co-infections I had.” Grodin’s doctor advised she do shots of penicillin for 10 months. “I have three children, so as you can imagine that’s a lot of shots!”  All of Grodin’s children were tested at birth, and thankfully were Lyme-free.

There is always the risk that Grodin’s children could get their own tick bites. “As a mom, I’m constantly concerned about Lyme disease prevention and checking my kids for ticks,” Grodin says. “I make sure my own back yard is as tick free as possible, and I use tick control to ensure this is the case. I use permethrin on my kids’ clothing, backpacks, jackets and so forth, and have educated them to do self-checks as well. My kids still enjoy all of the field sports and go off to sleep away camps and do all of the fun kid stuff that they want.”

This Mother’s Day, I will raise a toast to Grodin and to all the moms who are Lyme Warriors. To my friend who insisted on treatment for her son; to my own mother, who makes me meals and talks me down when my symptoms flare; to my stepmother, who comes with me to my doctor’s appointments, takes notes, and asks great questions; to all the moms who are suffering from Lyme, or whose kids have it; to the moms who are fighting for awareness and prevention; and to the friends and caregivers who offer maternal love and support to patients.

We couldn’t do it without you!