Lyme and the Olympics, Part Two: Of Dashed Dreams and New Lives

In Part One of this two-part series on Lyme and the Olympics, I wrote about athletes who have survived Lyme and gone on to compete in the Games. These people are nothing short of inspirational. But what about the athletes who don’t recover from Lyme, at least not enough to return to competitive sports? Or athletes who don’t have a tick-borne illness, but trip in their final race, miss the game-winning goal, or sustain a career-ending injury? As a child, I remember watching in horror when Olympic athletes missed their dreams due to a broken skate or a torn ligament or, in some cases, by a millisecond. I wondered how those people felt. I wondered what would become of them.

As an adult who has had to revision her life around tick-borne illness, I know. I may not have lost Olympic dreams, but I did have to give up the life I lived and loved in Colorado, which was focused around skiing. The mere prospect of that, from my vantage point of bed, was terrifying. For the first few years—yes, years—that I was sick, I chose to ignore winter. Skiing had been my way of life for as long as I could remember. I spent weekends in high school ski instructing in Vermont; I attended a college that boasted its own ski hill; and I moved West after graduation for the skiing first, job second. When Lyme knocked me off my skis, I refused to get excited about snow or look at friends’ pictures of perfect powder days. If I wasn’t out on the hill, then winter simply wasn’t happening.

Except, of course, that it was. While I was so busy denying the season, I was also denying myself the chance to enjoy (as much as one can from bed) the present. One day I complained to a friend about how much I missed skiing. He asked, “Are there other, quieter activities you can do? Something new you can learn?”

His words struck a chord. It wasn’t so much that it hadn’t occurred to me to try something new—I’d tried knitting, and had gotten so neurologically overwhelmed that I’d thrown the needles at my bedroom wall—it was that I was afraid turning to a new interest would mean giving up on my old one. And without that old interest as my central focus, I wasn’t sure who I was.

I ultimately realized that giving in temporarily doesn’t have to mean giving up. When I gave into my illness, I allowed myself to reconnect with activities I hadn’t enjoyed in years, such as scrapbooking and calligraphy. I started writing. These quieter, more creative pursuits helped me to pass the time while I waited to get better.

They also helped me to realize that even though skiing was a way of life for me, it wasn’t life itself. The core parts of myself—my values, my humor, my connections with friends—didn’t disappear when skiing did. I was still Jen Crystal, even if I wasn’t Jen Crystal the Skier.

I did eventually get back on the ski slope, but certainly not in the way I had at twenty-two, when life was ski eight hours a day, go out, sleep a bit, and repeat. Of course, I missed that life. I still do. But my perspective shifted. Just being well enough to get on my boards, even if it was for one hour on the bunny hill, filled me with gratitude and exhilaration I couldn’t have known in my healthier days. 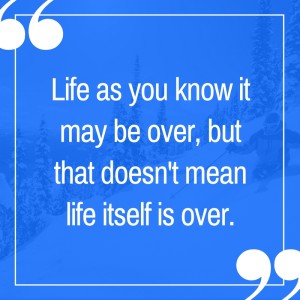 Though I did get back to a much gentler version of skiing, there are other sports I’ve had to give up entirely since getting sick. I used to be a slalom water-skier but haven’t been behind a boat in almost fifteen years. I haven’t been running in over a decade. I have, however, taken up new summer sports: paddle boarding and recumbent biking. They may not be as “hardcore” as my old pursuits, but they are fun activities that get me outside—what I missed the most—in a way that works with my illness. Had I ignored summer the way I’d once ignored winter, I would never have learned these hobbies; I wouldn’t have even known they existed.

It took me a long time to learn that life does not have to be over when you get Lyme, much as it may feel like it is when you’re bedridden. Life as you know it may be over, but that doesn’t mean life itself is over.

That bears repeating: Life as you know it may be over, but that doesn’t mean life itself is over.

Like fallen Olympic athletes who must give up their dreams, we must take the time to mourn the lives, the identities, we give up when we’re battling long-term tick-borne or other chronic illnesses. It’s an important part of the healing process. But then we have to brush ourselves off and figure out ways to reshape our lives. Because whether we acknowledge it or not, life will move forward. Instead of letting Lyme defeat us, we may as well bring it along for the ride.

To read about my first time back on skis, click here.

Jennifer Crystal is a writer and educator in Boston. She is working on a memoir about her journey with chronic tick-borne illness.