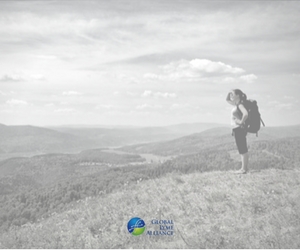 Birthdays and milestones can have a different meaning for Lymies and people with a chronic illness.

When I was six or seven years old, I asked a great-aunt how old she was. Winking at my grandmother, she replied, “I’m 39.” I understood 39 to be the last good year, the last decent age before it all started to go downhill; the year by which so many life goals are supposed to have been achieved. I didn’t worry too much, though, because 39 was always a long way off. By then I would be married, have a family, be settled in my career and stable in my life.

That was before I lost a decade to illness.

I turned 39 last month and it looks a lot different than I’d imagined, which is not to say it looks bad. My tick-borne illnesses have been in remission for years. I am writing and teaching, skiing and socializing. I’m living on my own. The view from 39 is certainly better than it was at 29, when I was in the midst of a relapse, back at my parents’ house, pulled away from my independent life for a second time.

That year I wrote in my journal, “I’m turning 29, and what do I have to show for it?” It was a sentiment I felt many times throughout the harrowing years of illness. Unable to work or even leave the house except for doctor’s appointments and trips to the pharmacy, I questioned my self-worth. Birthdays didn’t feel like celebrations; they were reminders of all that I wasn’t doing, all that I couldn’t do, all that I might never do. They were reminders of another year passing by while I struggled to survive.

What I didn’t understand then is that fighting tick-borne illness is an achievement of its own. Getting well was my full-time job, and I was working overtime. Though I often felt awful, I made strides. I was going to neurofeedback, integrative manual therapy and talk therapy appointments. I was taking all of my medications and supplements. Twice a day, I infused intravenous antibiotics and cleaned my own PICC line. I was working through the physical, mental, emotional and spiritual upheaval of being sidelined by illness, and that was certainly worthy of celebration.

I did not yet understand that success is not defined by a career, money or status. Of course, I wanted all of those things, and still think it’s important to support yourself through a job you love. That’s something I’ve worked towards in my thirties. But the fact that it wasn’t possible during the lowest point of illness did not mean that I have nothing to show for those years. I still had my character. I still had my values. I still had my sense of humor. And those qualities deserved to be celebrated.

Still, 39 is not what I expected it to be. I’m not married. I don’t have a family of my own. I am working hard but am not fully settled or stable in my career. I’m grateful for how far I’ve come, but I still want all those other things, and I’d be lying if I said I don’t feel some angst about not having them by this age. Most of my contemporaries are married with kids and mortgages and careers that allow for nice vacations. I love those friends and feel connected to them, but I’m not on the same track as them. My major detour puts me more on track with friends who are 29, because they are at the same point in their careers and personal lives as I am.

But the fact is, I’m not 29. As much as I can appreciate all that I went through in my late twenties and early thirties, I can’t get those years back. My body is aging. When I went skiing this year, I fell on some ice and remarked, “I don’t remember it hurting like this when I was younger. I would just get up and keep going.” I kept going this year, too, but spent the next day icing my sore spots and taking ibuprofen. I’m getting wrinkles around my eyes. Once in a while I pluck a silver hair from my head. My hands are getting veiny the way my mom’s and grandmother’s did at my age. I can’t blame those signs of aging on Lyme disease; I’m simply getting older.

The reality is that my biological clock is ticking. That scares me. But I’m also still holding out hope. During years of illness when I thought I might spend the rest of my life in bed, I nurtured a glimmer of faith, and it worked. I got better. Maybe not as fast as I wanted to, but it did happen. So I have to have faith that I will achieve all my other goals, too, even if they’re not happening in the time frame I’d always imagined.

If my great-aunt and grandmother were alive today, I might wink at them and say, “Maybe by the time I’m 40.”