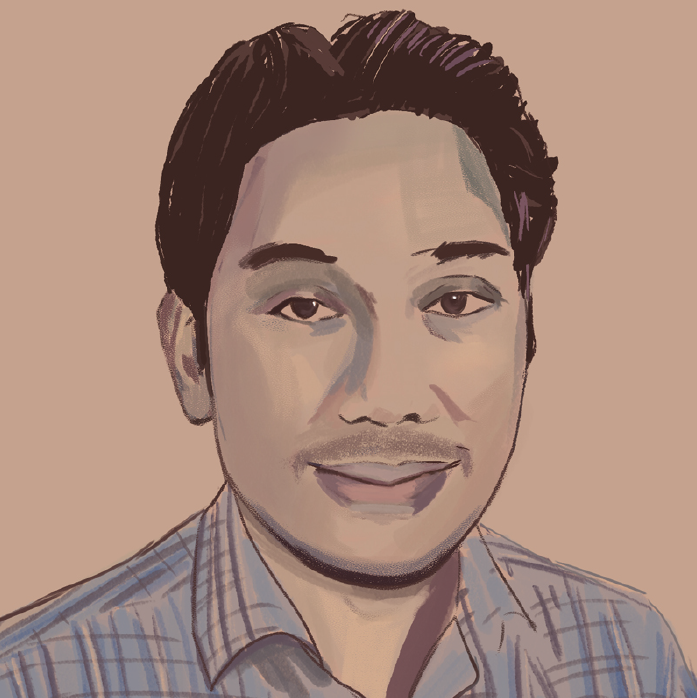 George Aranjuez, Ph.D. is faculty research associate at University of Central Florida. His postdoctoral research was supported by a Deborah and Mark Blackman-GLA fellowship award. His most recent peer-reviewed articles, about the replication of Borrelia burgdorferi, appear here and here.

When I was young, the things most interesting to me were how do things work? Before cable TV and the internet, my dad bought encyclopedias. We had junior encyclopedias, and I would go through, A,B,C,D and read, and those were my afternoons in the summers. I just enjoyed knowing how things worked. I went to a special science high school, and biology was heavily emphasized, and that steered me to biology instead of engineering. I had a knack for it and then I applied to my undergraduate degree in molecular biology and it went from there.

What kind of early subjects or projects did you work on?

In high school, we had science projects and we’d present them at science fairs. The winners would compete with other schools at the city level, and that was fun. I had a project that was botanical; certain plants take up heavy metals. We used a water plant that took up contaminating copper in the water, and then you could take the plant and dispose of it. Our biology teacher had to go to a university to use some equipment to measure the copper in the water, which she didn’t have to do. I could see she was really excited about teaching us. Everything was macro, with no access to the molecular biology such as I’m doing now. Only after getting to college when I worked in a research lab, could I work on microorganisms. That’s when my focus shifted to health and disease.

I think this is very important for scientists. We’re in the process of being creative to solve problems that stare us in the face. I play tennis, which is good for my health but is also different from what I normally do. I carve out time to play. I’ve been playing for about 4-5 years now, and it’s not just a physical activity. Once you know how to play tennis, the mental game comes in, and that’s been fun for me because there’s always something to improve on. I want the recreation to not be boring. Also, I play music – I was trained to play piano, so I decided to pick up the violin during the pandemic. I got a student violin and there’s a lot of YouTube videos to try to figure it out on my own. It’s more meditative than anything else. I also get inspired by listening to other scientists giving talks, which is why I enjoy conferences or now, seminars on zoom.

My first true mentor was my PhD mentor, Dr. Jocelyn McDonald at Kansas State University. She laid the foundation of how it is to be a good scientist, not just work hard and get a lot of data. She also showed you have to be able to communicate your work to audiences, either scientists and lay people. I practiced talks many, many times with her. And she’s very precise with her language. As scientists, you have to say what you mean in an unambiguous way. My current mentor now, Dr. Mollie Jewett, is the one who taught me Borrelia (the bacterial cause of Lyme disease) biology and the mouse model of infection. I feel like I had the right mentors at the right time in my development. Jocelyn was great for me because I needed the really solid foundation. Mollie really showed me the professional side of being a scientist, not only the biology of Lyme disease but also how it is to lead a lab and how you need to keep the lab running, manage your time, publish papers. As a postdoc, thinking about becoming a principal investigator, your time is really divided into more things. So being smart about where you put your effort in, that moves your work forward -- she showed me how to be a scientist and a manager. I have more responsibility now with students working on projects related to mine, so I’m responsible for directly interacting with students and developing projects. This was great for me at this stage.

I would like to have dinner with Dr. Anthony Fauci (Director of the National Institute of Allergy and Infectious Diseases, chief medical advisor, Covid-19 Task Force). I want to understand the people aspect of his job. The science part of being representative of the Covid-19 task force is clear. But you have to work with people who are not scientists, who may have different opinions. I want to know what was an effective strategy for communication, what didn’t work, and where do you look for the compromises so that you can move something forward? I think that’s been on display in the whole of last year during the pandemic, and comes back to the theme that science communication is very important. I think this was almost the hardest test for that. How do you come up with a policy that everyone will support? What will you never try again? That would be cool.

Let’s expand the question. How about a non-scientist that you would invite to this dinner party?

I want to invite Yo-Yo Ma for dinner…when the numbers during the pandemic kept going up, he kept on putting out videos during the pandemic, and they were very inspirational and positive. He has an album called Songs of Comfort and Hope and if you hear him talk, it’s almost a Mr. Rogers vibe: very calm and positive. He’s also on my mind because I’m running into a lot of classical musicians on YouTube because I’m learning the violin. I wonder where his positivity is coming from? He felt his role as an artist during the pandemic, to share his gift and inspire and bring hope to people. And it helped me, and I put some of his videos on the TV and watched those.

The connection between creativity for artists and scientists is likely important.

Maybe it’s too subconscious to even notice.

It was great timing - I was in my postdoctoral training and had an interesting project. Then, GLA opened applications to apply for this postdoctoral fellowship. It’s wonderful support, three years of funding, which you don’t see a lot of in funding agencies. After I was awarded a fellowship, I attended the yearly symposium, and that’s where I met you and the people at GLA. The gala was very interesting. I was sad we missed the March 2020 symposium that became virtual, which would have been my last one as a fellow. I appreciate the support – it’s harder to get funding, and to have this shot in the arm for the postdocs that became fellows, hopefully will pay dividends in the future for Lyme disease.

Staying with the Lyme disease theme, I wish I had more time to develop. Borrelia, in the five years I’ve worked on it, is a fascinating organism on its own. There are so many black boxes in the biology of Borrelia that we don’t understand. I feel like a lot of the Borrelia scientists were trained under the few who were there early on. I would like to bring in a lot more approaches and technologies from other fields of microbiology to apply to these problems. As a cell biologist earlier in my training, I would like to understand with more imaging, microscopy, which there are some doing, but we need more people doing this. I’m interested in what happens the moment that the tick, human and pathogen meet. We can capture things before that and a little after, but the granularity isn’t there yet. If you could watch transmission as it happens, you could know more about how this pathogen adjusts and escapes the immune system to cause Lyme disease. I think everything hinges on that first time the pathogen enters the host, whether it’s a mouse or a human. And if you could stop it there, then you could stop a lot of the disseminated, chronic disease. And if the bacteria overcomes the barrier, then you’re chasing after the bacteria that’s spreading. Focusing a lot on the host-vector-pathogen interface, if we had an unlimited budget, to bring those technologies in to bear on that moment, we could find out more. Fund a consortium to get the tick biologists, the bacteriologists and immunologists to figure out what happens in the first few hours. And I was hoping to move my project closer to that.

You did do this with Borrelia’s bbk13 gene.

Yes, that’s how we understand organisms -- we make mutations in certain genes, and we see what that does to the mutant. My struggle is that the reason why it’s hard to understand these infectivity genes is we don’t really know what the wild type (nonmutant) Borrelia does. We identified this role for expansion in the skin, which I think others have alluded to. But I think we identified that this may have some relationship with the later, more chronic infections. We discover a new infectivity gene but we hit a wall early, in terms of figuring out the function. Some of it is technical. With E. coli*, they know the defined media, so they know the bug inside and out. But we’re not there yet with Borrelia. There’s a lot we really just don’t know.

For figuring out the bbk13 gene of Borrelia, it was really looking at the skin. When we planned these experiments, we followed mouse infection in joints, ears, and distal tissues. Mollie said to include monitoring bacterial growth in the inoculation site in the skin. For me, it’s just another tissue. But it turns out that was the key, because that’s where we really saw the earliest effect of bbk13, by needle inoculation. The story changes when it’s by tick feeding, which will be the next manuscript. The nice thing is it improved the way we think of our mouse model of infection. Now we as a lab will think about what happens at the inoculation site, whether it is by tick feeding or needle inoculation. I’m particularly proud of that because it updated the mouse model.

Dr. Aranjuez was interviewed by Mayla Hsu, Ph.D. via zoom. The interview has been edited and condensed for clarity. *Escherichia coli is a common intestinal bacterium that is easily grown in lab culture and is well-studied.