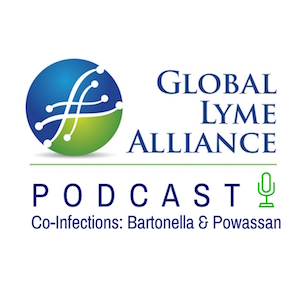 Bartonella is a tick-borne co-infection. As with Lyme disease, its symptoms can be debilitating.

While the most common tick-borne infection is Lyme disease, infected ticks may carry more than one kind of microbe or disease producing organism that can make humans very sick. The microbes are called co-infections, the simultaneous infection of a host by multiple pathogenic or disease-producing organisms.

Dr. Mayla Hsu, GLA’s Director of Research and Science, and Dr. Harriet Kotsoris discuss Lyme and its co-infections in a recent podcast. Below is an excerpt of the podcast that focuses on Bartonella and the Powassan virus.

Host: I’ve heard there’s a new tick-borne infection that’s somewhat controversial called Bartonella. Mayla would you like to tell us more about that?

Dr. Hsu: Sure. Bartonella is a bacterium that’s controversial in discussions of tick-borne illnesses because there is quite a lot of debate about whether it is actually spread by ticks and causes human disease. Now we know that it’s spread by fleas and body lice and sand flies, but ticks are a somewhat new idea that is gaining traction in some quarters. Bartonella is in domestic and wild animals and it causes various illnesses that we know about, such as cat scratch disease and trench fever, where people get bitten by fleas that are feeding on animals or by body lice. Now in recent years, Bartonella bacteria has been found in ticks in many countries around the world. The ticks do feed on host animals that carry Bartonella so it’s not surprising to find the bacterium in the ticks.

Humans with tick exposure, like hunters, have been found to have antibodies against Bartonella so that indicates they’ve been exposed, but whether Bartonella actually causes illness in healthy people is under debate. There’s no question that Bartonella is a big problem for people who are immuno-compromised and they can get sick, but even there we don’t know how much of it is acquired from tick bites versus flea bites. Now, if people do get Bartonella it’s diagnosed by looking for the DNA of the bacteria or by growing or culturing the bacteria, and then it is treated with antibiotics. Often the first symptom is striations or lines that look like stretch marks on the skin and it can progress into fever and lead to very serious illnesses including things like heart inflammation or endocarditis.

Host: A new class of microbe that is very different from the bacteria and parasites we’ve been hearing about are the viruses spread by ticks. Since they can’t be treated with antibiotics, should we be worried about them?

Dr. Hsu: The virus that is spoken about as transmitted by Ixodes or black-legged ticks, is the Powassan virus, which is also sometimes called deer tick virus. Powassan virus or deer tick virus are actually two different genetic lineages of very similar virus so let’s just call it Powassan virus. It was first described in the 1950s. Powassan virus can be very serious because in half of cases, 50% of cases, people have continued long-term neurological consequences and disability due to encephalitis, or inflammation of the central nervous system. The virus actually infects the brain. The fatality rate can be 10 to 20%, especially in the elderly, the immunocompromised or people with other health conditions.

The symptoms for Powassan virus are fever, vomiting, weakness, memory loss, and seizures. The diagnosis is made by doing a blood test or a spinal tap looking for antibodies against the virus. The treatment for Powassan virus is, as you said, it can’t be treated with antibiotics. They don’t work against the virus, so the treatment is mostly supportive. That is providing respiratory support, fluids, drugs to reduce brain swelling. Now, luckily Powassan virus is rare. There were 13 cases that were reported in 2013 to the CDC, so it’s actually not a really prevalent disease. It is found in actually a very low percentage of ticks, maybe three to 5% of ticks are co-infected with Lyme disease and Powassan virus, so it is there. It is present so we have to be concerned about it. Now overseas there are many more cases of a brain infection caused by ticks, there is tick-borne encephalitis, and that is also caused by a virus, a tick-borne encephalitis virus, that has been recorded and associated with serious illness.

Host: Obviously a lot of people haven’t heard of these co-infections spread by ticks, can you tell us about some of the major problems and how we cope with tick-borne diseases?

Dr. Hsu: One of the biggest issues is probably awareness. There are medical professionals who have heard of Lyme disease but may not have heard of these others.

Dr. Kotsoris:  Health authorities may not test for some of these if they’re unaware of them and then ordering the right diagnostic tests has to be done. The Lyme disease diagnostic by itself is highly inaccurate and so even getting that diagnosis is problematic. Without reliable molecular diagnostic techniques some tests are only available experimentally or at limited federal or state levels. Initial diagnosis is very difficult and you can’t sit around and wait for an antibody response, so physicians have to be better diagnosticians. They can not, as I said before, they can not sit around and wait for convalescent titers, antibody titers to indicate that the patient has had the infection. That’s four to six weeks after the initial infection. Until the FDA approves some of these experimentally available techniques, makes them more widely available to the frontline physician, we have to rely on clinical diagnosis.

Host: What about the treatment of tick-borne illnesses?

Dr. Kotsoris: It’s important to note the treatment for Lyme disease doesn’t cure the others necessarily, so proper diagnosis is critical to getting proper treatment that is specific for the co-infecting microbe. Also having two infections might make the symptoms tougher to treat. There are some research studies that indicate that co-infections actually make the illnesses more powerful individually. For example co-infections of Babesia and Lyme disease may make it harder to treat the patient than if he or she had only one of those.

Host: Are there other issues we should be thinking about with regard to tick-borne co-infections?

Dr. Hsu: I think there’s a lot we simply don’t know about the biology of co-infecting pathogens. For instance, we don’t understand a lot about how they grow in their host animals, more than one microbe. We don’t really understand how they get into a tick and how they survive in the tick, and very basic questions like infection of humans, from ticks to humans.

Host: Given all the lack of awareness, what kind of studies are needed to better understand and treat tick-borne diseases?

Dr. Hsu: There are some emerging illnesses now that are suspected of being caused by ticks but we don’t know for sure. We need more research. For instance, there’s a new illness that’s emerging called stari, S-T-A-R-I, and what that stands for is Southern Tick-Associated Rash Illness. We know that this is caused by a tick bite but we still don’t know what the pathogen or the microbe is that is responsible for the illness. Diagnosis, which we talked about is sometimes complicated. Some of the technology to diagnose some of these co-infections, like really sensitive molecular biology, looking for the DNA of the organism, is not readily available in some parts of the world.

Dr. Kotsoris: Travelers to other parts of the world may come home to the United States where the best of medical care is apparently available and doctors here may not know about those tick-borne illnesses, so education has to be a big part of it.

Host: Tick-borne diseases are a very big problem. Let’s hope that public health officials and the funding organizations take them seriously, especially since climate change is going to mean more sick people, more school and work absences, less productivity, and have a huge economic impact. Thank you for all the discussion today and thank you to all of you listeners.