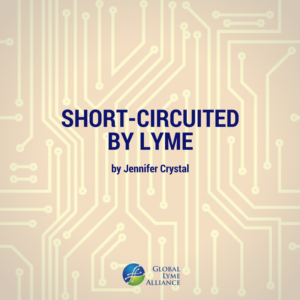 Understanding how everyday functions can be short-circuited by Lyme disease.

During my 2007 relapse, I was sent to a state-approved doctor who was supposed to decide if I really had Lyme disease, even though it had already been clinically diagnosed by a Lyme-literate doctor and confirmed by CDC-positive blood tests. I was nervous about this basic 15-minute physical exam that would determine whether or not I deserved disability benefits. I told the doctor all of my symptoms, but I wasn’t sure he believed me. My eyes, ears and lungs checked out okay, so I worried he would write me off as healthy.

Then he asked me who the President of the United States was.

Cheeks burning red, I stared at the doctor. Seconds passed, then minutes. For the life of me, I could not come up with George W. Bush. Of course, I knew he was the President at the time. I was a college-educated woman with a background in politics and a good understanding of current events, despite being so sick. But in that moment, my mind went blank.

These delayed reaction times are common with neurological Lyme disease. When Lyme crosses the blood-brain barrier, the bacteria invade the brain and central nervous system, causing operational slow down. I think of the brain as a system of wires: neurons and their connectors, synapses that when working properly allow us among other things to accurately communicate and move. That doesn’t happen, though, when there are bugs in the brain. I sometimes imagine the spirochetes chewing on the wires, fraying and sometimes ruining them like a phone cord getting caught in a vacuum.

Lyme patients can’t just buy a new phone cord; we must rely on antibiotics to fix our faulty wiring. In the meantime, we’re short-circuited, which can manifest in myriad ways: brain fog, word iteration, word mix-ups, tremors, mini seizures, sleep disturbances and, as shown in my embarrassing silence at the doctor’s office, delayed reactions.

Sometimes I joke that I need to do a Google search on my brain to come up with an answer. It might pop up in a few seconds, a few minutes, or not until hours or days later.

Lyme victims’ bodies suffer similar delays. When we’re attacked by infection, we feel sluggish and run down; think about how tired and achy you feel when you have the flu or bronchitis or a sinus infection. The same is true for Lyme, except the infection is not localized. It’s burrowed in bones, muscles, cells, and joints, and can spread to every bodily organ. Lyme weighs the body down like thick molasses, causing everything to run more slowly. I remember having my reflexes tested during my first appointment with a Lyme literate doctor. The physician’s assistant tapped on my left knee. At first, there were only crickets; my leg did not respond. Then, a few seconds later, it shot up the way it was supposed to.

That same knee had given me trouble years earlier, before I knew I had Lyme and other tick-borne infections. I’d torn my ACL skiing and the rehabilitation had taken much longer than expected. I was working overtime at physical therapy, but when the orthopedic surgeon examined my knee two months after surgery, he proclaimed, “This is awful. Your leg should be much stronger than this by now. Clearly you aren’t doing your exercises.”

In fact, I was doing more exercises than required, over-achiever that I am. But there was another important fact I didn’t yet know about: Lyme loves to hide in scar tissue. The spirochetes, not my lack of effort, were delaying my recovery.

Once I was accurately diagnosed with Lyme and co-infections, my recovery was tedious, as it is for many patients. My body is slow to metabolize medications (when I had the ACL surgery, the epidural took so long to wear off that I was almost admitted overnight; when I had my wisdom teeth removed, the twilight anesthesia didn’t kick in until after the procedure was over!). It takes me much longer than the average healthy person to recover from acute illness, too.

Everything is slower with Lyme. But it does still happen…just on delay. Even my disability benefits came through, years after I initially applied.