Starting Small in the New Year 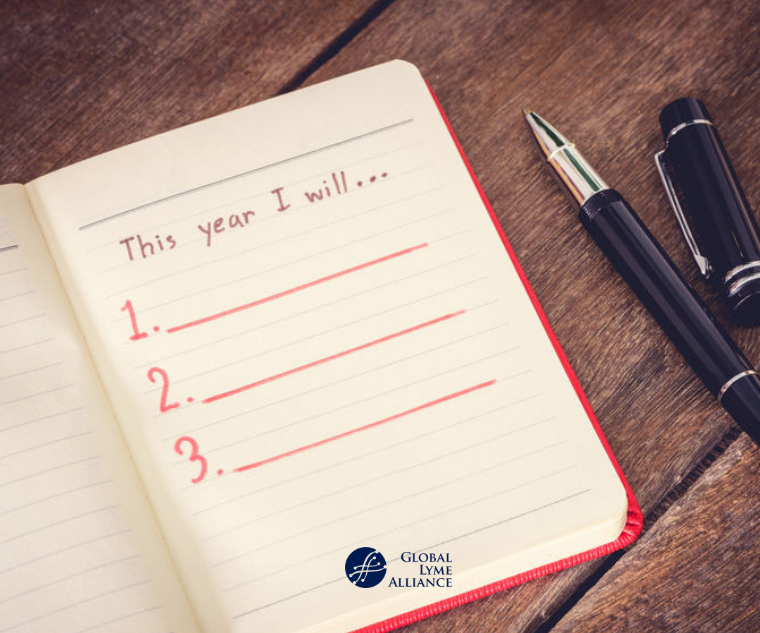 New Year’s Day is supposed to be a time of renewal. People celebrate and make resolutions for a fresh start. But for Lyme patients and those with chronic illness, New Year’s can feel like any other day. Most patients aren’t well enough to go out, and there doesn’t seem to be much to celebrate. When your illness doesn’t have an end date, New Year’s can leave you feeling sad and frustrated.

For many years, I ignored New Year’s altogether. Sure, I always had hope that the new year would be the one in which I’d start to feel more like myself. Maybe I’d get my PICC line out! Maybe I’d regain my independence. Maybe I’d write a book about my journey.

But those were lofty goals for someone who was bedridden. I didn’t have much control over making them come true; I had to wait for my medications to work. This was a tough one for me, because I’ve always been persistent. If I set my mind on something, I worked hard until I made it happen. It frustrated me that I had to be so patient now.

And so when friends asked me what my New Year’s resolutions were, I said I didn’t have any. I hibernated on New Year’s Eve and went to bed early.

When I woke up, it was still the new year. It didn’t matter that I hadn’t partied the night before or stayed up until midnight. This is a good reminder for the sickest of Lyme patients: It’s okay to miss out on a holiday entirely if you are too ill to participate. Do not get wrapped up in guilt or stigmas of what you’re “supposed” to do to mark the start of a new year. I haven’t seen midnight in over a decade, and life has still gone on just fine.

That said, as my tick-borne illnesses slowly went in to remission, I realized that my attitude about New Year’s didn’t have to be so extreme. Setting lofty goals was unrealistic, but I also didn’t have to ignore the holiday entirely anymore.

Instead, I started making small, but achievable resolutions. These resolutions looked different than the average healthy person’s. Someone who isn’t suffering from tick-borne disease might resolve to go to the gym every day, or lose ten pounds, and they can make those things happen. But typical resolutions don’t work for Lyme patients. Going to the gym while in the midst of intense treatment would be impossible, even dangerous. Dieting could deplete the patient of vital nutrients needed to fight infection.

However, there are resolutions that can work for patients of tick-borne illness, or for anyone whose life is atypical in some way. The key, I’ve learned, is to start small. I’ve always been bad about flossing my teeth, so one year my sole resolution was to floss once a week. Of course, my dentist would prefer I floss once or twice a day. But that goal felt overwhelming, since I didn’t always have the energy. Once a week, though, felt manageable. When that weekly routine became habit, I increased the goal to twice a week, and so on.

Small resolutions can make you feel like you’re working towards the larger goal of health. Perhaps going completely gluten and sugar free feels like too much for you. What if you resolved to start by cutting just one of those foods, and to do so over the course of a few weeks or even a month? How about trying one new fruit or vegetable each week?

Resolutions often have a negative connotation—they are meant to correct something we are doing “wrong.” It’s helped me to reframe resolutions from something big and pressured into something scalable. How about resolving to do something really nice for yourself once a week, like painting your nails, taking a bubble bath, or taking an hour to yourself to read a favorite magazine? I recently read that hugs are good for our health. I therefore resolve to hug at least one person every day.

Whatever resolutions you make for yourself this year, make sure they are gentle and loving, and most importantly, make sure that you start small. Slow and steady wins the race with Lyme disease!

Jennifer Crystal is a writer and educator in Boston. She has written a memoir, One Tick Stopped the Clock for which she is seeking representation. Contact her at: