Taking Lyme One Day-Minute-Second At A Time 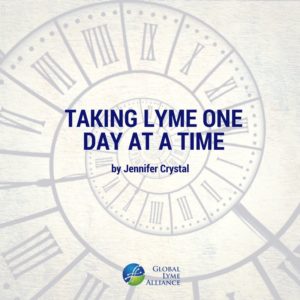 How do you manage Lyme symptoms that can change day by day, minute by minute, second by second?

Last weekend in Boston we had a nor’easter. I wondered if it was just a bad April Fool’s Day joke, because come Monday morning the sun was shining, the snow was gone and the temperature was climbing towards 50 degrees. Looking out my window, I thought of the old adage, “Don’t like the weather in New England? Wait five minutes and it will change.”

This maxim applies to Lyme disease, too.

When I was really sick, people would say to me, “Just take it one day at a time.” But that wisdom didn’t apply, because my symptoms could run the gamut in the course of a day. I might wake up exhausted from a horrible round of nightmares and feel washed out and foggy for the morning, but then I’d perk up after lunch. Or I could wake up feeling “relatively” good—meaning well enough sit up for a couple hours typing emails or even drive into town to run errands. That last part was dicey, though, because I never knew when I would run out of steam. Some days I might feel okay at breakfast and intend to go to the pharmacy afterwards, but would then suddenly have to crawl back into bed as soon as I finished infusing my morning antibiotics. Sometimes I made it out for the errands but then crashed halfway through. I remember sitting in the dressing room of a store that was five minutes from my house, crying because I’d hit a wall and didn’t think I could go through with the purchase, let alone drive home. I was only trying to buy underwear! I remember thinking, “If I can’t even do this basic errand reliably, how will I ever live in a normal life?”

I had to learn that Lyme isn’t one day at a time. Lyme is one hour at a time, one minute at a time, sometimes even one second at a time.

The bad news about this is that I had to accept that those periods of wellness might not last. The good news, though, was that it helped me to hold on through the bad periods. I used to chuckle to myself as I lay in bed thinking, “You don’t like this? Wait five minutes, and it will change.” I didn’t always feel better in five minutes, but the worst periods did eventually pass, and it helped to remember that my illness could be as mercurial as the weather.

It also helped to alleviate the pressure of thinking about how to get through a whole day all at once. If I woke up feeling awful, the prospect of twelve hours of such torture was unbearable. But if I said to myself, “You just have to get through the next hour,” the pain and fatigue and anxiety and brain fog and word iteration became slightly more manageable. I was taking control of my emotional reaction to my symptoms, even if I couldn’t control the symptoms themselves.

On the flip side, I had to recognize that an hour feeling good might not stretch into the next hour. This was frustrating, of course, but it also helped me to be present. I would say to myself, “I feel good right now. It’s only 9 a.m. and I might feel awful by 11 a.m., but I’m okay this minute and am going to take advantage of it.” With Lyme disease, there’s never a minute of wellness or energy to waste.

Eventually, those good minutes and good hours started to stretch. They became more frequent. Now in remission, I generally know that my energy will be good in the morning, wane in the afternoon, and pick back up in the evening. Holding on through months of terrible hours, of terrible minutes, of terrible seconds, got me to a point where I can now enjoy months—years—of good days.

If you are at a point where you are surviving Lyme by the second, wait it out. Take the disease in whatever increments you can. And know that no matter how many surprise storms might there might be, spring eventually arrives.