Tick-borne Infections on the Rise in Gray Wolves

As the majority of emerging infectious diseases stem from wildlife, the rise of tick-borne Infections in gray wolves is a good indicator of the future of Lyme and other tick-borne diseases.

Wild gray wolves evoke images of unfettered nature and animals loping freely through forests and meadows. But a new study of wolf populations in northwest Wisconsin shows that a high percentage of them are actually infected with tick-borne infections, which suggests that they are potentially suffering ill health.

Many of us know that rodents like squirrels and mice, as well as larger animals like white-tailed deer, are hosts for Ixodes scapularis, the tick that transmits Lyme disease. The bacteria that cause Lyme disease (Borrelia burgdorferi), anaplasmosis (Anaplasma) and ehrlichiosis (Ehrlichia), grow in these host animals and colonize the ticks who bite them to take blood meals. When infected ticks then bite humans, we too become infected by the bacteria, and get sick.

Scientists analyzed 373 blood samples drawn from wild gray wolves between 1985 and 2011. Using the Snap 4Dx test, which is used by veterinarians to test for tick-borne illnesses in dogs, they looked for antibodies that recognize these microbes. Their presence indicates past exposure to the pathogens. Overall, they found antibodies to B. burgdorferi in 65.6% of animals, Anaplasma antibodies in 47.7% and Ehrlichia antibodies in 5.7%. These findings show that tick-borne pathogens are common in gray wolves in Wisconsin, and as expected, the American dog tick Dermacentor, and I. scapularis tick vectors that transmit them were routinely found on the animals.

While the sex of the wolves was unrelated to the percentage infected, their age was important. A higher proportion of adult wolves had B. burgdorferi, Anaplasma, and Ehrlichia antibodies than pups. This is unsurprising, since greater age means increased probability of being bitten by ticks. Also, adult wolves move greater distances, with greater exposure to questing ticks, compared to pups, who generally stay near their den. 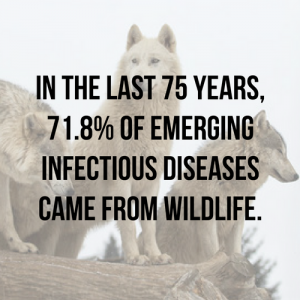 The research also showed a 50% increase in the prevalence of B. burgdorferi between 1985 and 2011 among gray wolves.  The counties in which wolf exposure has increased the most are among the Wisconsin counties in which human Lyme disease has also expanded the most.  By contrast, the prevalence of heartworm, a parasitic disease spread by mosquito bites, did not change during this time frame, suggesting that conditions favorable to ticks, but not mosquitoes, may be driving disease spread.

Why should we care about tick-borne diseases in wild wolves? They are free-ranging animals whose exposure to ticks is greater than that of pets or humans. They go places that we don’t go, and humans do not remove ticks from them as they do from domestic dogs. Thus, they can be regarded as sentinels of infectious diseases in wilderness spaces. Nationally, the Lyme disease epidemic in humans is expanding, particularly in the Northeast, Wisconsin and Minnesota. Several studies suggest that climate change may favor the growth of ticks and mosquitoes. So, information about vectors and microbes in wild animals everywhere will help us to plan and implement measures for safeguarding public health. In the last 75 years, 71.8% of emerging infectious diseases came from wildlife.

But aside from illnesses that we as humans may acquire, the health of gray wolves is important for another reason. They are predators and preserve ecosystem health, by preventing the overpopulation of prey species. Whether gray wolves become severely sick from tick-borne illness isn’t well known, with a few documented cases of captive wolves losing weight after Borrelia infection. So far, it appears that the wild wolf population, rebounding from near-extinction, has not been harmed by tick-borne microbes. However, we have a responsibility to remain vigilant to health threats to all species and in all habitats, not just our own.