The High Cost of Telling Someone ‘You Don’t Look Sick’

I remember the first time someone told me, “You don’t look sick.” I was sitting in urgent care and the doctor told me I had a rare infection in my spine after seven months of being passed from doctor to doctor with no diagnosis.

“No wonder they missed this. You don’t look sick, you’re so calm and composed.”

Little did she know the internal turmoil that had been going on in my head. I thought I was slowly dying, and that I would die before anyone could figure out what was wrong with me. One of my legs had blown up like a balloon, my inflammatory markers kept crawling higher and higher, and the pain had gotten so bad I felt like I was being stabbed in my side. But I guess I didn’t look sick.

On the final episode of The Oprah Winfrey Show in 2011, Oprah famously said, “I’ve talked to nearly 30,000 people on this show and all 30,000 had one thing in common—they all wanted validation. They want to know do you hear me? Do you see me? Does what I say mean anything to you?”

Lyme disease is the ultimate “invisible illness,” a name given to diseases you can’t see. Not only do many of us look normal, but our illness is not recognized by conventional medicine. We are told our symptoms are “all in our head,” or that we are “faking it.” The CDC and IDSA say our illness doesn’t even exist, referring only to Post-Treatment Lyme Disease Syndrome, as opposed to chronic Lyme disease, which according to the CDC website “almost always gets better with time.” 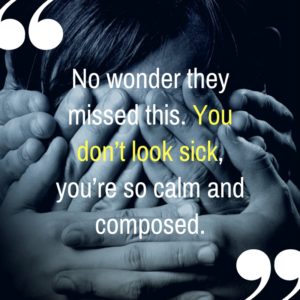 The second time I was told I didn’t look sick was ten months later. The cause of the infection continued to elude the top doctors in Illinois, and I was left with no viable treatment options. For a while, I’d been seeing a therapist, who specialized in health issues, to help me cope with the crippling anxiety of being undiagnosed. After working with an integrative medicine doctor and doing research on my own, I suspected Lyme disease. I explained my suspicions to my therapist and she said, “People with Lyme disease are really sick.” I wondered what impression I’d been giving her. I knew I felt really sick; apparently I still didn’t look it.

It turns out it was Lyme disease and multiple co-infections. Once I had a name for it, I thought everything would be different. I thought doctors would finally take me seriously, no matter what I looked like. Then, I started learning more and more about the controversy behind chronic Lyme disease diagnosis and treatment. I knew what I had, but no one in the medical community would give me any validation.

The third time I was told I didn’t look sick was more recent. I was back in the hospital awaiting a third biopsy on my spine, and a young resident told me, “You are the healthiest person we’ve seen all day.” I felt like she was looking right through me.

I didn’t go to medical school, so I don’t know how doctors are taught to analyze physical appearance, but I know enough people with chronic health conditions to know you can’t always see the chaos that is happening inside the body. At a time when chronic and invisible illnesses are being diagnosed at epidemic rates, we might want to stop looking at outside appearance to determine how sick someone is or how much help they may need. It seems like a dangerous way to assess and diagnose, which may lead to missing something or minimizing a serious issue.

The misconceptions aren’t limited to the doctor’s office. At times, family and friends disregard Lyme patients, because they can’t see our pain or fatigue. It’s human nature to judge a person’s health based on appearance. If you look fine, you must be fine, right? We are expected to work, do chores, be social, and help out just like anyone else. Things you would never ask of someone in a full body cast or with a gaping wound. For that reason, we have to constantly come up with excuses as to why we can’t do something, and feel the need to justify what we have is real.

What is the cost of telling someone, “You don’t look sick”? It’s not what you say, it’s what the person hears. Every time someone said those words to me, I heard, “I don’t hear you, I don’t see you, and what you say doesn’t mean anything to me.” And that is what truly makes people feel invisible.