You're Not Alone Anymore

My battle with Lyme Disease was easily the most difficult experience of my life. A journey that lasted almost 3 years, that included more than 15 doctors, several incorrect diagnoses, and countless days where I wanted to give up. One of the worst parts of my illness, besides my symptoms, was my loss of identity. I am a singer/songwriter. I love my job, and everything that comes with it. The traveling, the writing, the performances, and especially interacting with audience members. So much of my life was wrapped up in my job. When I got sick, all of it was taken away. Are you still a writer when you haven’t written anything in years? Are you still a singer if you never sing? I was scared that my illness would take away what made me unique, and what made me proud of myself.

Sometimes, I write songs because I want to, and sometimes, I write because I have to. Some songs I write hoping that millions of people will hear them and love them. Some I write just for me, to help me deal with whatever is going on in my life. I wrote “You’re Not Alone Anymore” to process what it was like for me during the height of my illness. The loneliness, the self-doubt, and fear. Fear of not getting better, fear of not being heard or understood. I never intended for anyone to hear it. Until my girlfriend and I were invited to Something Inside So Strong, a Lyme disease conference held at The Royal Theatre Carre in Amsterdam. We were interviewed about what it is like to be a couple where one person has Lyme and the other doesn’t. She shared about having to give up the idea that she could be my whole support system, because she knew I needed other people with Lyme to help me through that process.

WORLD PREMIERE 'YOU'RE NOT ALONE ANYMORE' | Singer songwriter Jesse Ruben: ‘This is a song that I started writing when I was at the worst of my symptoms and that I finished when I got better. I have never played it for an audience, because I never felt like anybody would get it.’ I'm so grateful Jesse, for your heart warming performance at Something Inside So Strong, the Lyme event in Amsterdam.

When it came time for me to perform, I decided at the last second, in a room full of 800 people with Lyme disease, to perform “You’re Not Alone Anymore“. I could tell from the audience reaction that it was the right thing to do. Since the performance of the song was posted online a few days ago, the song has been shared more than 500 times and viewed over 24,000 times. It just shows you how big this community is, and how many people are suffering.

I hope the song gives people hope. I know how hard the process of dealing with Lyme can be. 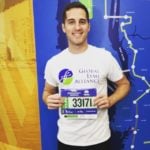 Jesse Ruben is a singer/songwriter. Learn more about Jesse’s music, his battle with Lyme and his inspiring “We Can Project” here.