by Admin at Global Lyme Alliance on September 8, 2021

The article was written by Brittany Magelssen for The University of Texas at Dallas on September 1, 2021

Dr. Sarah Maxwell, author of the study mentioned in the article, is a GLA ambassador, part of the Lyme Education Ambassador Program.

Deer ticks are known for transmitting Lyme disease throughout North America. Many Lyme disease cases go unreported to county health agencies in part because they do not meet the Centers for Disease Control and Prevention’s specific criteria for the disease. More than 30,000 new cases of Lyme disease are reported each year to the Centers for Disease Control and Prevention (CDC), although this number is believed to be an underestimate of the total number of cases of Lyme disease actually diagnosed and the U.S. State-level surveillance is one way of tracking when and where the disease occurs, but recent estimates using other methods suggest that the actual number of patients may be more than 10 times higher than the number reported to the CDC.
In a study published June 21 in the journal Healthcare, a researcher from The University of Texas at Dallas employed new approaches to tick-borne disease surveillance in Texas with the goal of linking differing forms of surveillance data into one comprehensive picture. Dr. Sarah Maxwell, corresponding author of the study and associate professor of public and nonprofit management in the School of Economic, Political and Policy Sciences (EPPS), and her co-authors found that mapping the geographic locations of self-reported tick bite encounters with CDC-confirmed Lyme disease cases could offer a granular-level surveillance method and aid in assessing Lyme disease risk in areas perceived to be nonendemic to the tick-borne pathogen.

Lyme disease, which is caused by a bacterium that is transmitted through the bite of an infected tick, is the fastest-growing vector-borne disease in the country, according to the CDC. It can be difficult to diagnose because it can produce a wide variety of nonspecific symptoms. Even when suspected by a clinician, many cases go unreported to county health agencies in part because they do not meet the CDC’s specific criteria for the disease.

“Human disease risk from all tick-borne diseases is truly unknown and underreported, making it difficult for physicians to receive important information that could help in diagnosis and for public health officials to engage in prevention,” Maxwell said. “This is especially true in states such as Texas, where the state overall may have a low incidence of tick-borne diseases, but where individual counties have higher risk.”

They focused their efforts on Texas and used data from the Texans and Ticks Survey, a social media-based questionnaire that Maxwell developed to collect state, county and ZIP code information self-reported by Lyme disease patients. The responses included the geographic location of any tick bite recalled by the individuals.

Using data from 95 respondents, the researchers found an overlap between tick-bite location and CDC-confirmed human cases of Lyme disease and canine tick-borne diseases.

The overlap of the two factors is unlikely to be a coincidence, Maxwell said.

“Given the number and consistent overlap of survey respondents to human and canine tick-borne disease reports, our findings suggest that tick-bite location may serve as an indicator or proxy for human disease risk in areas often perceived to be nonendemic,” she said. 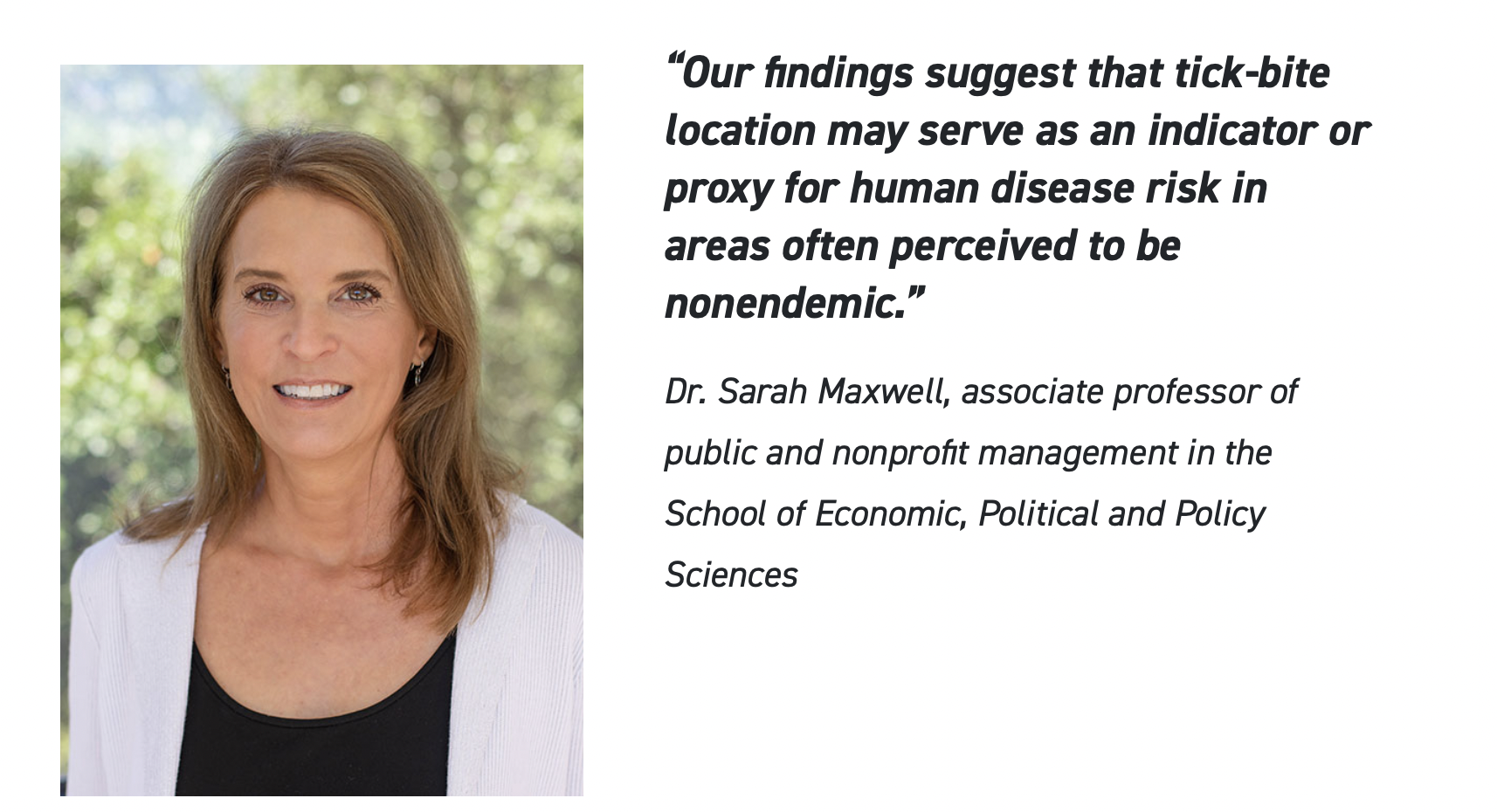 The need for such comprehensive and new surveillance techniques is imperative, Maxwell said. The CDC publishes county-level Lyme disease data and makes it available to the public and researchers but limits all other tick-borne diseases to only state-level surveillance.

“Researchers and some public health officials are faced with a constant obstacle: Lyme disease is not the only tick-borne disease,” Maxwell said. “Ticks can carry many different pathogens. Yet, the CDC does not publish county-level data for tick-borne diseases other than Lyme. Given that many patients with Lyme disease report having multiple co-infections, knowing the disease risk is imperative for physician knowledge and adoption of prevention behaviors among local community residents.”

Maxwell’s recent publications about Lyme disease include a brief research report from Aug. 14, 2020, in Frontiers in Public Health with co-authors Dr. Dohyeong Kim, associate professor of public policy and political economy and geospatial information sciences in EPPS, and Quang Le BS’19, a medical student at the University of Virginia.

With funding from the Ministry of Education of the Republic of Korea and the National Research Foundation of Korea, the researchers compared patterns of Google search trends for Lyme disease symptoms with CDC-confirmed cases.

Patients who lack common symptoms of Lyme disease or who test negative under CDC guidelines, yet still suspect they have the disease, may turn to online searches to learn more, Maxwell said.

The researchers found similar patterns between the search frequency of terms including “Lyme,” “tick bite” and “circular rash” and the actual incidence of the disease.

“The data validate the notion that patients search the internet prior to disease confirmation,” Maxwell said. “When people are sick with a cold or the flu and search for symptoms, it’s easy to check. Do you have a cough? Do you have a fever?

“Here, the notion is that Lyme disease is a multisystem infection. No one has done research looking at online searches with multisystem diseases in which there are so many symptoms, involving so many parts of the body, and both physical and mental symptoms.”

She recently accepted a faculty affiliate appointment at Boston University’s Laboratory on Human Neurobiology. As part of an interdisciplinary working group, Maxwell will collaborate with faculty members from BU and George Mason University on research involving Lyme and other tick-borne diseases.

To read the rest of the article, click here.