Could the Return of Large Predators Curb the Rise of Lyme Disease? 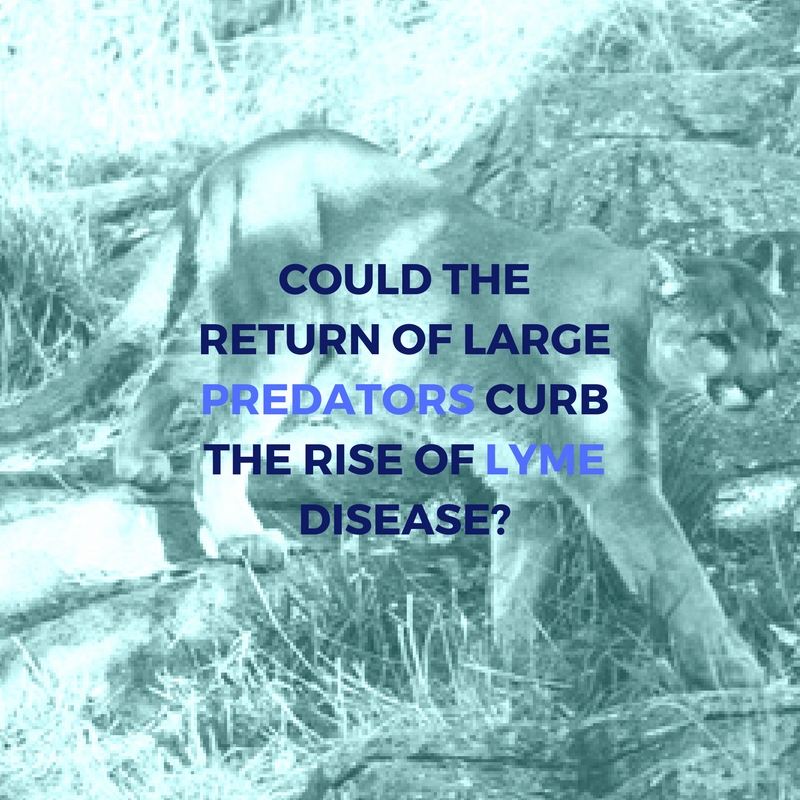 from The New York Times, August 20, 2016 by Moises Velasquez-Manoff

Every year, at least 30,000 people — and possibly 10 times that — are infected with the bacterium that causes Lyme disease, most in the Northeast and upper Midwest. Symptoms can include fatigue, joint pain, memory problems and even temporary paralysis. In a small minority of cases, the malaise can persist for many months.

So it’s worrisome that in recent decades, Lyme cases have surged, nearly quadrupling in Michigan and increasing more than tenfold in Virginia. It’s now the “single greatest vector-borne disease in the United States,” Danielle Buttke, an epidemiologist with the National Park Service in Fort Collins, Colo., told me, and it’s “expanding on a really epic scale.”

What’s behind the rise of Lyme? Many wildlife biologists suspect that it is partly driven by an out-of-whack ecosystem.

Lyme disease is transmitted by bites from ticks that carry the Lyme-causing bacterium, Borrelia burgdorferi. Ticks get it from the animals they feed on, primarily mice and chipmunks. And rodents thrive in the fragmented, disturbed landscapes that, thanks to human activity, now characterize large sections of the Northeast.

If humans have inadvertently increased the chances of contracting Lyme disease, the good news is that there’s a potential fix: allow large predators, particularly wolves and cougars, to return.

They would help keep down the number of deer, which, although they don’t carry the Lyme-causing bacterium, probably encourage its transmission.

A largely unsung conservation triumph in the Northeast is the regrowth of its forests. New England has more trees than at any time since the Colonial period. But the forests should have a robust understory — grasses, shrubs and other plants. In the Northeast, abundant deer have depleted this ground cover. Taal Levi, a biologist at Oregon State University, speculates that the diminished understory has limited the recovery of some small predators from the weasel family that hunt rodents. Dr. Levi suspects that more deer may have meant fewer rodent hunters, and more rodents.

Wolves and cougars may also control one predator that has settled in the Northeast over the past century — and that counterintuitively may have worsened the Lyme problem. The coywolf, as it’s sometimes called, is a hybrid coyote that’s one-quarter wolf, two-thirds Western coyote and also part dog. Dr. Levi thinks that this Eastern coyote has exacerbated the Lyme problem by killing or scaring off another rodent predator — the fox — without reducing the deer population.

As with much of ecology, these connections are hypothetical. And predators are not the only important factor; overall diversity matters, too. Consider the fastidious opossum, which, because it grooms obsessively and is expert at removing ticks, functions as a tick death trap. More opossums in the ecosystem might mean fewer ticks, reducing the chance of getting bitten by one that carries Lyme.

But there is evidence to support the predator theory. On California’s Channel Islands, off the coast of Santa Barbara, scientists found that, once variation in rainfall and island size was accounted for, those islands with the greatest number of predator species had the lowest prevalence of hantavirus, a nasty rodent-borne disease that kills 36 percent of the people it infects. “Predators can really regulate infectious disease, and actually protect us,” Dr. Buttke said.