STUDY: Rare, but Ticks that Carry Lyme Disease are in Kansas

by Admin at Global Lyme Alliance on September 17, 2021 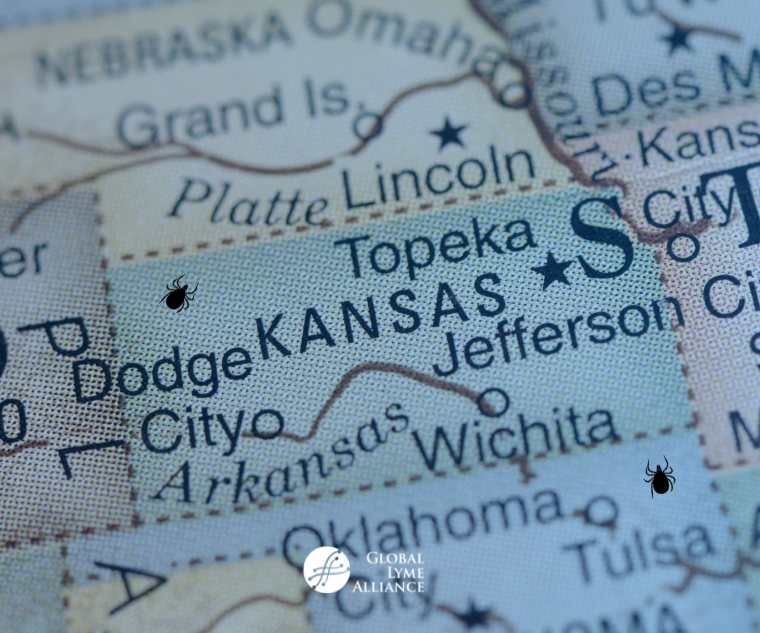 LAWRENCE - A team of researchers is sampling ticks throughout Kansas and Oklahoma to understand the risk of tick-borne diseases, which could help medical professionals better diagnose tick-related illnesses.

KU’s team, led by A. Townsend Peterson, University Distinguished Professor of ecology and evolutionary biology and senior curator at the Biodiversity Institute, samples ticks at five sites across Kansas.

They are detailing pathogen types, documenting infection levels, developing disease maps, and determining the presence of Lyme disease and other pathogens.

The researchers have collected about 40 ticks active during the fall and winter that have the potential to carry Lyme disease. They’ve also found about 10 other bacterial pathogens in the ticks they’ve sampled. For example, 10-20% of the ticks carry the bacteria that cause ehrlichiosis, an illness that causes fever and muscle aches.

Ultimately, this research will increase understanding of tick populations and the pathogens they harbor in Kansas and Oklahoma. 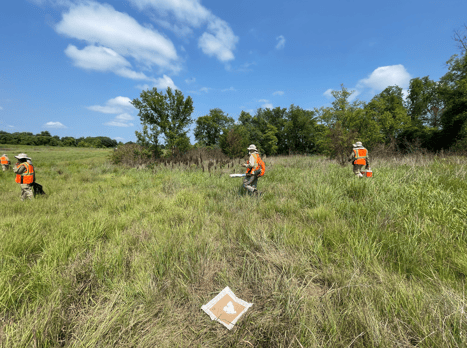 A team of KU biologists collets ticks at Clinton Lake, one of five sites it samples across Kansas. (Photo by Jarrett Mellenbruch)

What methods are you using in your research?

Sampling is laborious. A team of three to six people spends a full day in the field. We sample at two sites in each state every two weeks for two years and at five more sites four times a year. Sites include two counties in eastern Kansas near the Missouri border and another site far to the west, north of Hays. We had to balance sampling at more sites versus sampling with greater detail at a few sites. Everything you do with fieldwork is a tradeoff.

While sampling, one person waves a flannel flag across the vegetation. If ticks are looking for a host or mammal, they'll grab onto the flag. Another person drags a piece of flannel between two poles.

A third way the team samples is by using dry ice traps because ticks find their hosts not just by movement but also by detecting exhaled carbon dioxide. They're strange traps — a square of cardboard with masking tape, sticky side up, around the edges, with a lump of dry ice in the middle. The dry ice sublimates directly from solid to carbon dioxide, resembling how a mammal exhales carbon dioxide. The ticks crawl on the trap and get stuck in the masking tape. This fall, we’ll also add a fourth way of collecting ticks, which is by live trapping small mammals and combing their hair.

These are the ridiculous things biologists do. But we’ve collected about 6,000 ticks so far, and it's going to get us a clear view of which pathogens are being carried by ticks around Kansas and Oklahoma. These are the pathogens that you and your doctors should be aware of, but a lot of the medical personnel are not aware of them.

After sampling, we preserve the collected ticks and ship them to Oklahoma State University, where the team there identifies the tick and sequences its DNA to determine if it carries pathogens.

Why does your study matter to your field and to society?

About 15 years ago, one of my doctoral students traveled to a field site near Lawrence. A day or two later, he came into my office and asked, "Do you know anything about this?" as he pointed to a mark on his leg. He had the classic tick bite and bacterial infection, which looks like the red Target store symbol. I was familiar with it because I had gotten a tick-borne disease previously in the Philippines. I told him he needed to go in for diagnostics. And indeed, he had been infected. His doctor put him on a heavy-duty series of antibiotics that got rid of the infection. In that case, I knew exactly where to get advice.

I had another friend who lives in a house in the woods near Vinland, Kansas. He bumped into my wife at the grocery store and mentioned to her that he had been exposed to a tick-borne disease. He also had the classic Target symbol. But his doctor told him he didn’t need antibiotics until he showed symptoms. My wife had just been through this with my student, so when she told me about it, I knew his doctor had given him the wrong advice. Several tick-borne illnesses go through an acute phase where you might get the equivalent of a cold. Antibiotics are very effective at that early stage immediately after exposure. It doesn’t show up in all cases, but it can become a chronic disease if not treated early. At that late stage, treatments are much more radical and are essentially like chemotherapy. We all want to avoid taking antibiotics as much as we can, but it's better than dealing with a chronic disease.

Incorrect information from medical personnel in this region is unfortunately common. They may not pay attention to a set of symptoms, ask if the patient has been bitten by a tick, or inquire if the patient is exposed to ticks during activities such as hunting, fishing, farming or hiking. There are a lot of cases of tick-borne diseases that get misdiagnosed in this region.