The Effect of Drought on Tick-Borne Disease in Africa 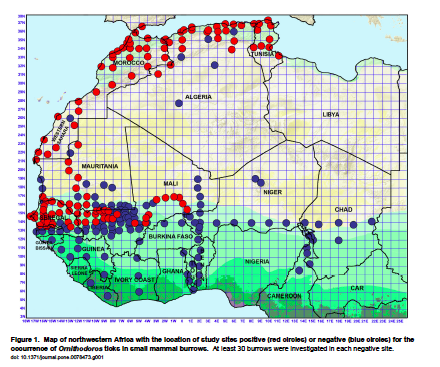 Lyme disease, which is endemic in the United States, is caused by the bacterium Borrelia burgdorferi . In Africa, however, there are different tick-borne diseases affecting communities.

Tick-borne relapsing fever (TBRF) is one of the most frequent bacterial diseases in Africa, and is transmitted by bites of the Ornithodoros genus of tick, which has a soft body instead of the hard body of ticks that are common in the US. These ticks also carry different species of the Borrelia bacterium, including B. hispanica and B. crocidurae, which are known to cause TBRF in northern and western Africa. In addition to harboring different pathogens, these species of ticks also have extremely varied preferences when it comes to their chosen habitat and climatic range.

In Africa, ticks colonize burrows to find shelter and hosts for blood meals. These burrows are typically dug by small mammals in dry ground, and are located near houses, agricultural fields, or in undeveloped areas. Since many of the burrows are close to where humans live and work, many people are at risk of getting bitten and becoming ill with TBRF.

A groundbreaking study conducted by Jean-Francois Trape et al. in 1996 revealed how quickly TBRF was spreading, and how climate could enhance the success of the TBRF bacterium. This research revealed that 10% of the study population in Senegal became infected with TBRF during a two-year prospective study period, and that the range of this disease was almost an entire degree of latitude further south than the previous southernmost boundary of the disease.

To find the underlying cause behind the increased infection rate and southward range expansion of TBRF, Trape et al. (1996) investigated the possible connection with climate, specifically, a drought in Senegal and other areas of sub Saharan Africa in 1970. To see if dramatic changes in precipitation could be related to the spread of ticks, they mapped out the average annual precipitation in Senegal from 1947 to 1969 and from 1970 to 1992, the periods before and after the drought. They then compared precipitation maps to the maps of the tick’s range in these two time periods, and found that the ticks preferred habitats with annual rainfall below 750mm. Areas receiving 750mm of rainfall were at the southernmost border of the tick’s range. The maps also revealed that the drought caused annual precipitation to drop in all areas. Regions that had average annual precipitation of 850mm to1,000mm from 1947 to 1969 had less that 750mm rainfall in the period during the drought. The shift in annual precipitation allowed areas that were previously unsuitable for ticks to become welcoming habitats, and with the spread of ticks across Senegal, came the increasing prevalence of TBRF.

So why do the ticks in Africa prefer drier conditions, while the ticks in America thrive in humidity and high precipitation? The answer links back to the habitat choice of the ticks. In Africa, small mammals often dig the burrows that the ticks inhabit, so that they can evade the hot and dry climate that they face above ground. Environmental stressors usually invoke an appropriate behavioral response in pants and animals, and for small mammals in Africa, the response to severe drought is to dig burrows in the ground. This could be the reason why the persistent drought in sub Saharan Senegal that started in the 1970’s allowed ticks to expand their range, and why ticks are further extending their ranges now, as Africa is undergoing the impact of climate change.

An example of this is the Gharb region in northwestern Morocco, which has recently documented a high incidence of TBRF in humans. A study by Souidi et al. (2014) investigated the reasons behind the increase of TBRF by looking at how many small mammal burrows are colonized by ticks in the area, how many of those ticks are carrying infectious bacteria, and how the changing climate might tie in to these variables. The data that this study collected suggests that the increasing aridity of the northwestern Morocco could be a significant factor in the rising incidence of ticks and TBRF in the Gharb region.

Climate change will impact each ecosystem differently, with each species and community reacting differently to the series of severe effects that it brings. Ticks around the world are facing different outcomes of climate change, such as increasing temperatures, higher rates of humidity in some areas, as well as increasing aridity and dryness in others. It seems that in all cases, however, natural selection drives the ticks to exploit these changes, and they are spreading faster than ever.