Lyme and the Olympics: Part One of a Two-Part Series 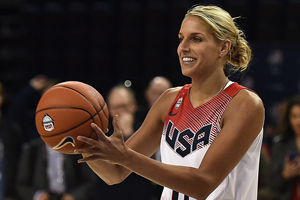 When I was in fourth grade, I won an Olympic gold medal. Okay, it wasn’t a real Olympic medal, but when my gym teacher put it around my neck after my gymnastics routine in our school Olympics, I felt like I was up there with Mary Lou Retton. As my gym class emulated what we saw on TV—from swim routines (using scooters on the gym floor) to Opening and Closing ceremonies—I got completely swept up in the spirit of the Games. I can still recite the Olympic creed: “The most important thing in the Olympic Games is not to win but to take part, just as the most important thing in life is not the triumph but the struggle. The essential thing is not to have conquered but to have fought well.”

Little did I know, all these years later, how much that creed would apply to my own life.

Fighting Lyme disease is not unlike training for the Olympics. One battle may be fought in bed and the other on a field or court, but patients and athletes have similar goals.

At first, for both, the ultimate goal is to win. The patient only wants to get better, to be cured, to get back to his/her old life. The athlete wants to beat out competitors, to win gold.

Someplace within us, we always hang on to those goals. Of course Lymies hope for a cure. Of course an Olympic athlete who has trained for years wants a medal to show for it. But what about the Lymie who was misdiagnosed for years, who is on long term treatment that is helping but also causing Herxheimer reactions? What about the athlete who trained as long and hard as the medalists, but falls just short of the time or score needed to get on the podium? What about the Lymie who relapses, the athlete who trips and falls in the final race?

This is where the Olympic creed comes in. It can be really hard for Lymies—and, I imagine, for athletes—to remember that “the most important thing is not to win but to take part.” When I was shaking in bed from mini seizures, begging for sleep that would not come, and changing my sheets every couple of hours from drenching nightsweats, I’d had it with taking part. I wanted to win, but more often than not, I wanted to give up.

Had I given up, however, I wouldn’t have tasted the sweet victory of remission. I’m not cured. I’m not back to the life I led before Lyme. But I am living a great new life within the context of my illnesses, one that involves medications and naps but also teaching, writing, socializing, skiing, and paddleboarding. I earned that life by showing up for battle, every day. By taking part in the most hellish aspects of my medical journey. Participating in the struggle is precisely what brought me to a new definition of triumph.

The Olympic athletes I look up to now are the ones who embody the Olympic creed. Athletes whose training has been that much harder than their competitors’, because it has also involved fighting Lyme. There’s Elena Delle Donne, a member of the U.S. basketball team headed to Rio. Diagnosed in 2008, Delle Donne has struggled through relapses to become the WNBA MVP, and the first ambassador for the Lyme Research Alliance (which merged with the Tick Borne Disease Alliance to form the Global Lyme Alliance). In an interview with Reuters, Delle Donne said, “This season I’ve been playing well and staying pretty healthy so people just think the disease is gone. But it’s something I battle every single day.”

Other Olympic athletes who have shown up for the daily struggle of Lyme include Christie Rampone, captain of the 2012 U.S. Olympic soccer team, and Angeli Vanlaanen, freestyle skier who competed at the 2014 games in Sochi (Vanlaanen also created Lymelight, a video about her battle with Lyme. Despite poor conditions in Sochi that led to disappointing runs for Vanlaanen, she expressed in interviews how grateful she was just to be able to compete. For Vanlaanen, “the essential thing [was] not to have conquered, but to have fought well.”

For all of us struggling with tick borne illnesses, these athletes offer inspiration. They remind us that winning isn’t always about getting a gold medal, or being cured. The important thing is not for us to conquer Lyme, but to fight it well. It’s not an easy fight, but it is worth it. I can promise you that the new life I am living feels even greater than having a plastic Olympic medal placed around my neck. Remission is the real deal.