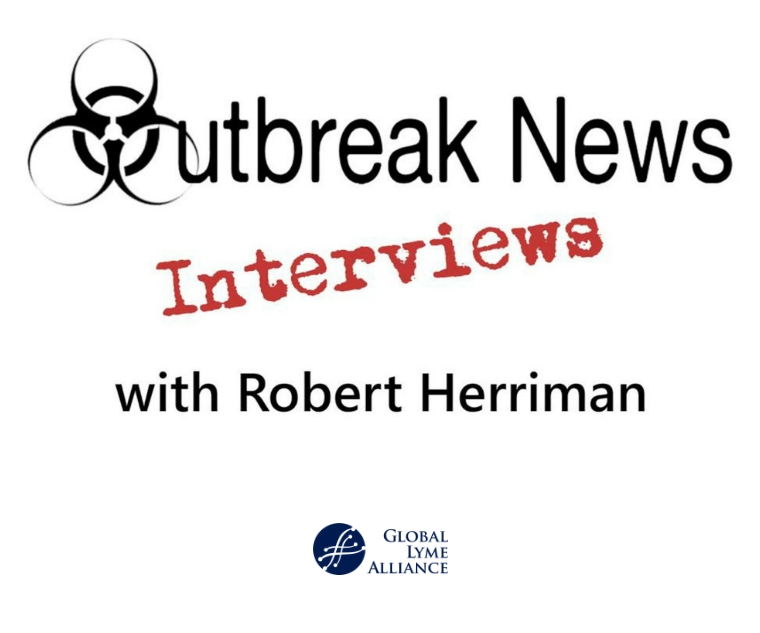 Read the complete transcript below or listen to the podcast:

Robert Herriman: Well hey everybody, this is Robert, and welcome to Outbreak News Interviews. Now the Federal Tick-Borne Disease Working Group recently released their first report to Congress about one year after the panel first convened. The Infectious Disease Society of America, or the IDSA, responded to the report in a letter that contained some criticisms of the report. So what is the Federal Tick-Borne Disease Working Group, what’s in the report, and what did the IDSA have to say? Well joining me to discuss these issues is Chief Scientific Officer for the Global Lyme Alliance, Timothy Sellati, Ph.D. Dr. Sellati, welcome to the show, sir.

Timothy Sellati: Thank you for having me.

Robert Herriman: You bet. So Dr. Sellati, let’s go ahead and start out with some basics ’cause some people may not be aware of this. What is the Federal Tick-Borne Disease Working Group, what’s their mission, and what’s the personnel composition of this group?

Timothy Sellati: So the Working Group was established as part of the Congress’s passage of the 21st Centuries Act, back in December 2016. The intent of that Act was to promote new healthcare initiatives for addressing array of public health issues, and one in particular was the advancement of research on tick-borne diseases. So with that as a backdrop, the US Department of Health and Human Services established the Federal Advisory Committee, the Tick-Borne Disease Working Group. So the Working Group is comprised of 14 voting members, there were seven public members and seven Federal members, and the composition of the Working Group was really drawn from a diverse group of professions. We had individuals that are world renounced research scientists, and physicians from top tier academic institutions and hospitals, subject matter experts from government agencies, as well as key stakeholders from the public sector including patients, and their advocates from several Lyme and other tick-borne disease nonprofit organizations.

Robert Herriman: Okay. So they recently released their first report, it’s a pretty hefty 108-page document. Dr. Sellati, what did you find good and important in the report?

Timothy Sellati: So I think some of the most important or key recommendations out of the report really related to epidemiology, and ecology, that was one of the subcommittees of the Working Group. And there, it was really driven home, the idea that Lyme disease surveillance criteria, which is a criteria that the CDC the Centers for Disease Control and Prevention, use for calculating the number of Lyme disease cases that occur annually. Those really should be used for surveillance purposes alone, and not for diagnostic purposes. The other important take home message from the prevention subcommittee was a focus on development of anti tick feeding vaccines, and really trying to work with key stakeholders to build trust via transparent mechanism to help examine and discuss the past Lyme disease vaccine activities, what some of the issues were with it, and the potential for adverse events so that that information coming from a number of different sources could help inform future vaccine development in Lyme disease. In terms of diagnosis, the real take home message was the importance of evaluating new technologies or approaches for the diagnosis of Lyme disease and other tick-borne diseases because of the inherent limitations with the current two-tier testing method. And the importance of including children in the process of diagnostic test validation as well, because children are particularly prone to the devastating consequences of dealing with Lyme disease, or other tick-borne diseases.

Timothy Sellati: In terms of treatment, I think conduct of additional clinical trials using appropriate target populations where gaps may exist. And there really, the glaring gap is with respect to patients, that experience, persistent symptoms and disability and diminished quality of life following the current standard of care, which is 10 to 28 days of antibiotics. So it’s really important to understand, this really came through as the overall gestalt of the report, that Lyme disease can be treated with antibiotics, but as many as 10% to 20% of infected individuals do not respond favorably to those antibiotics, so they go on to develop what we call Post Treatment Lyme Disease Syndrome, or in some circles, chronic Lyme disease. And so it’s really important to really address that gap in our understanding of how best to treat that patient population.

Timothy Sellati: And then the one last thing, and this was really a common theme that came out of all of the subcommittees’ reports, was the need to allocate increased funding for tick-borne diseases in the areas of research, treatment, and prevention, and have it really pegged to the burden of illness. So proportionally, there is much less federal funding to tackle tick-borne diseases than there are funding for other infectious diseases where the number of cases per year are considerably smaller.

Robert Herriman: Yeah. Now, were you 100% on board with everything in the report, or were there any issues that you had a problem with?

Timothy Sellati: I didn’t have any issues per se, with the report, as much as a concern about one of the recommendations. And this related to the protection of the rights of license and qualified clinicians to use individual clinical judgment to diagnose and treat patients in accordance with the needs and goals of each individual patient. I’m sort of reading that, verbatim almost, and while I don’t have any concerns about allowing licensed and qualified clinicians to care for their patients as they see fit, I also recognize that as a result of desperation on the part of some patients that have dealt with Lyme and other tick-borne diseases for years, if not decades, they are driven to seek out medical care from clinicians using treatment options that have not been carefully vetted by the scientific research establishment, or the medical research establishment. And so there’s a concern that there are some treatment options out there that really have not been proven to effectively treat the symptoms or the diseases that these desperate patients are dealing with.

Robert Herriman: Not too long after the release of the Working Group’s report, the IDSA sent a letter to DHHS Secretary Alex Azar, and it contained some criticisms of the report. You responded to the letter in a post on the Global Lyme Alliance website. Can you spend some time talking about that?

Some of the criticisms leveled by the IDSA that really caught my attention was that they had significant concerns with the Working Group’s lack of transparency, and minimal opportunities for meaningful public input. And I just didn’t understand the basis for that criticism, given that the Working Group was really comprised of so many different subject matter experts, and physicians that are treating patients, and the patients themselves, that I think the greater concern on the part of IDSA is that perhaps they didn’t have as much input into the report, or the content of the report, that came out of the Working Group’s extensive efforts.

Timothy Sellati: The IDSA also suggested that some of the recommendations of the working group would “cause significant harm to patients in public health,” and they really urged Alex Azar to ensure that the Federal government response to tick-borne disease’s fallacy rooted in the best available scientific evidence. And you know, part of the problem is in the controversy surrounding Lyme disease, is that the IDSA takes a strict parochial approach to considering Lyme disease, and the consequences of infection with bacteria that causes Lyme disease. From their perspective, they think Lyme disease, or promulgates this idea that Lyme disease is easily treated, and it’s easily diagnosed, and only very rarely does it result in lasting consequences of infection. But there is more and more well established scientific evidence in the main stream literature that argues against that very narrow understanding or narrative that IDSA wants to push forward.

Robert Herriman: Now, going to your first point, on the Working Group, is there any former or current IDSA members on that Working Group? I mean, do you know that?

Timothy Sellati:  Yes, I believe there are.

Timothy Sellati: I believe there are. But on the flip side, there are also, from what I understand, members of the ILADS organization as well. The composition of the subcommittees also was careful to include research scientists and physicians that really span the spectrum from IDSA on one of the end of the spectrum, to ILADS on the other. So I really do think that within the limited, within the capabilities of the Working Group, they were as intent as possible, in terms of hearing the voices of a wide variety of individuals. And again, to some extent, maybe IDSA would like to have had a larger bullhorn in terms of influencing the Working Group’s final report to the Congress.

Robert Herriman: So I just take it from your previous answer, that you don’t think most of the IDSA criticisms really hold a lot of water?

Timothy Sellati: No. No, I really don’t. And that’s what really spurred me to write this rebuttal in the first place. Again, I believe many of IDSA’s criticisms stem from the fact that the overall content of the report doesn’t necessarily fit into their mantra that Lyme disease is easy to diagnose, it’s easy to treat, and only very rarely results in lasting consequences of infection. So when you come into trying to solve a problem with that mindset, it limits how you approach trying to solve that problem.

Timothy Sellati: Yes, I’m glad you asked. So there is one final thought. As far as the report is concerned, I think there was a very important section in the report titled, “Looking Forward,” and in my opinion, I think one of the most important take home messages from that section was the need to develop and disseminate more comprehensive clinical education that highlights the diversity of symptoms that Lyme and other tick-borne disease patients might present with, expand the geography of infecting tics, and also the limitations of the current testing procedures. So I think if we do a better job of communicating to clinicians, and maybe even at the level of medical school students, the complexity of Lyme disease, and what some of the true limitations are in terms of prevention, diagnosis, and treatment, they will be better prepared to take care of the diversity of patients that they see during their practice.

Robert Herriman: Well very good. Well, I wanted to thank you Dr. Timothy Sellati for joining me to discuss these very important issues, I appreciate it, sir.

Timothy Sellati: Thank you very much.