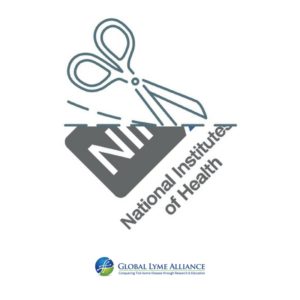 GLA CEO Scott Santarella shares his view on what the proposed NIH budget cuts could mean for Lyme and tick-borne disease research.

While this budget will be debated for some time to come, we are convinced that the proposed cuts would represent a grievous setback for Lyme and tick-borne disease research. The view that the security and prosperity of our country must come at the expense of medical research is simply incorrect. Research is an economic driver.

Government funding for Lyme and tick-borne disease research is already minimal, with only 17% of applications addressing Lyme approved by NIH every year. Yet the loss of even that small increment of funding would represent an unprecedented abandonment of those individuals suffering from this terrible disease.

Global Lyme Alliance is a dynamic and rapidly growing organization whose contributions to improved diagnostics and treatment modalities have been crucial. Still, it would take us years to supplant the lost NIH investment in Lyme and tick-borne disease research. The Lyme community cannot afford to face a gap of years in which research progress is static.

Lyme and tick-borne disease patients already face the great injustice of still having no definitive diagnostic test and only limited treatment options. Left untreated, or inadequately treated, Lyme’s victims suffer devastating health outcomes. To further compound that injustice by thwarting research progress is unconscionable. With 329,000 people in the U.S. diagnosed with Lyme disease annually, this is the wrong time for surrender.

Global Lyme Alliance will continue to do what it has always done to maximize its fundraising operations. But make no mistake, the loss of NIH research dollars would be deleterious beyond our imagining. We hope you will make your voice heard and send a clear message to your Congressional representatives to ensure federal funding levels for Lyme and tick-borne research remain strong.