The Making of a Lyme Disease Research Scientist 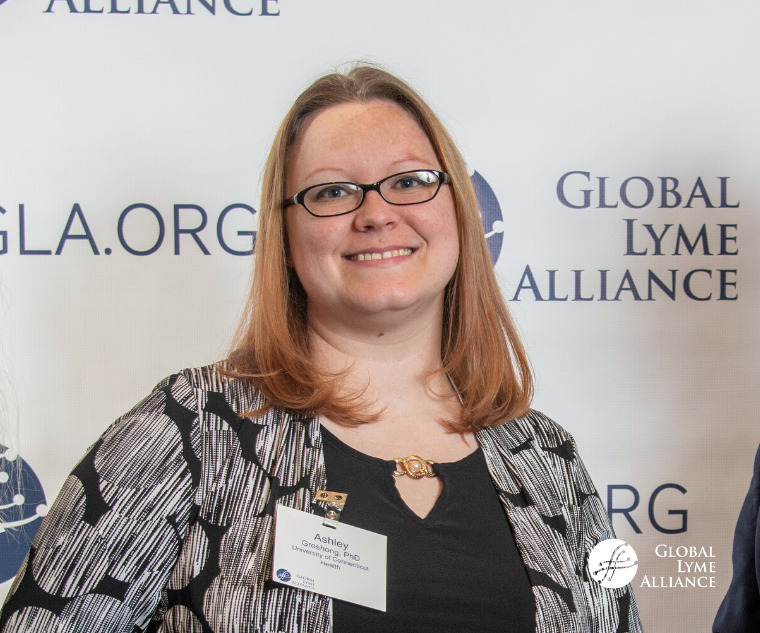 Most Lyme disease stories start with a tick bite and symptoms. But Ashley Groshong’s (pictured) Lyme disease odyssey began by peering down a microscope lens. As a young biology student at the University of Arkansas, she studied Bacillus bacteria, which include the pathogen that causes anthrax. However, it wasn’t until she began a training rotation in a lab studying Borrelia, the spirochete bacteria that cause Lyme disease, that she became enthralled. “Literally from the first time I saw those guys in a microscope, I was in love. It only made it more fascinating that they were so hard to work with. They are so odd, they don’t do anything that is standard to microbiology textbooks.”

Years later, after receiving her Ph.D., Dr. Groshong’s “love” story endures. She is now junior faculty at the University of Connecticut, continuing to work on Lyme disease. She has made important discoveries in understanding how the bacteria grow and cause illness. We in the Lyme community are grateful that someone so dedicated is in our corner, looking for better ways to understand the bacteria, and ultimately to treat patients. But in the last 40 years, the standard of Lyme disease care hasn’t changed much. Today almost 2 million people in the US are estimated to suffer long-term, post-treatment Lyme disease. Why has progress been so slow?

One answer is that there aren’t enough Dr. Groshongs out there. The road to becoming a qualified expert is a long and rigorous one. Typically, it begins with science majors in universities and colleges. Those who are interested in further study continue with graduate work, which requires a research-intensive, usually lab-based project that can last 3-7 years and leads to a Ph.D.

Newly-minted Ph.D. scientists then spend an additional 3-5 years as postdoctoral fellows, working under the mentorship of established scientists. Often, the projects they develop open areas of inquiry that they subsequently use to set up their own, independent labs.

Driving all of this training is funding. The National Institutes of Health (NIH), the major U.S. government agency funding biomedical research, has an annual budget of $32 billion. Typically, academic research grants can be applied for through its NIH extramural funding program. This money is dedicated to basic science, or understanding disease and disability. Findings pave the way to improved prevention and treatment of illness, and have led to life-saving cures and vaccines.

The NIH also pays for studentships and postdoctoral fellowships. These are awards that pay for salaries, tuition and other education expenses so that trainees can focus all their time on learning. Such critical funding at these early career stages helps to keep young scientists on track.

Sadly, Lyme disease continues to be a poorly-funded area of research. With a limited pool of trained personnel, there is always the risk that Ph.D. students and postdoctoral scientists will leave to work in better-funded subject areas. Since provocative research is often driven by young scientists doing curiosity-driven basic science, this attrition contributes to the slow pace of discovery in the Lyme field.

That’s why postdoctoral fellowships are such a tremendous boon to Lyme research. The Blackman-GLA Postdoctoral Fellowship program began in 2017, with the generous support of the Blackman family. It was conceived as a serious commitment to developing young Lyme scientists at a vulnerable stage in their career training, for which support is often lacking. Ashley Groshong, a postdoctoral fellow at the time, was one of five grantees. They all had to write a detailed description of their research projects and plans for how to address the subject of bacterial persistence and host evasion. They also had to show previous research achievements and describe the project milestones they anticipated; moreover, they had to prepare a three-year project budget. The award also included a travel allowance, so the grantees could meet and collaborate with other Lyme researchers.

Awards of three years length are particularly helpful, because such stable support keeps scientists from constantly interrupting their lab work to write funding applications. Because their research projects have defined goals, publication in peer-reviewed journals is anticipated. This, in turn, positions the postdoctoral fellows to develop new skills as they transition into the next step — becoming independent scientists.

A measure of Dr. Groshong’s success is that she was recently promoted to her junior faculty position. Collectively, the Blackman fellows have published four peer-reviewed research articles so far, a stellar accomplishment for a program that hasn’t finished its three years of funding. When finishing their postdoctoral training, a major goal for academia-bound scientists is to obtain an R01 grant from NIH. For many university departments, faculty appointments are in large part dependent on such grants, which are a significant source of support for sustaining an independent research program.

However, the age at which investigators are awarded their first R01 grant has steadily increased. From 1980 to 2012, the average age of a first R01 grant recipient grew from age 35 to 44. Commensurately, the success rate of R01 applications has dropped from close to 40% to less than 20%. Waiting until one’s mid-forties to achieve this key career goal means many leave research for industry or non-research careers. This uncertainty is another reason Lyme disease research support at all levels has become reliant on nonprofits like GLA. Moreover, it underscores the importance of privately funded postdoctoral fellowships.

GLA is proud to partner with the Blackman family to develop the pipeline of Lyme scientists. As Ashley Groshong says, “the fellowship has given me the opportunity to really make this project into my own work and get it to a point to move on to NIH grants. That makes me very competitive as I look for academic jobs. I love teaching and training the next generation of scientists. I can’t imagine being fulfilled doing anything else.”

Please contact stacy.velarde@GLA.org should you be interested in helping to foster additional postdoctoral researchers to accelerate advances in understanding and treating Lyme disease and tick-borne co-infections. We also encourage you to contact your elected representatives in Washington and urge them to advocate additional NIH postdoctoral funding for Lyme disease and other tick-borne co-infections.