Connection Between Lyme Disease and Depression 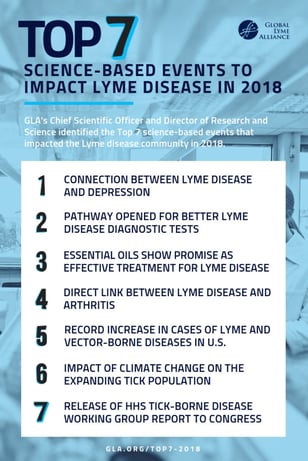 GLA-funded investigator, Brian Fallon M.D., with Columbia University, published a study in the journal Psychosomatics linking Lyme disease and mental disorders, particularly depression and suicide. According to the study, titled “Depressive Symptoms and Suicidal Ideation Among Symptomatic Patients with a History of Lyme Disease vs Two Comparison Groups,” depression has been reported in 8 – 45% of patients with post-treatment Lyme disease syndrome (PTLDS), but little was known about suicidal tendencies in these patients. The extent and severity of depression and suicidality was compared between PTLDS and HIV/AIDS patients, and a non-patient control group was compared.

The results conclusively demonstrate that suicidal tendencies increase among patients who are depressed and that, perhaps surprisingly, depression experienced by PTLDS and HIV/AIDS patients was statistically indistinguishable. This seminal study highlights the fact that one in five patients with PTLDS reported suicidal thoughts and the importance of screening for depression and suicidality to optimize patient care. See more GLA-published research

Inaccurate diagnostic testing is one of the biggest challenges for patients and physicians alike. Thanks to a report generated from a meeting of Lyme disease experts, including scientists from the FDA, NIH and CDC, the pathways for impactful superior diagnostic tests are here. The meeting, underwritten by GLA, resulted in two articles summarizing the experts’ findings; “Advances in Serodiagnostic Testing for Lyme Disease Are at Hand” and “Direct Diagnostic Tests for Lyme Disease” were published in Clinical Infectious Diseases, a journal of the Infectious Diseases Society of America.

The articles outline the need for better tests and describe newer approaches in direct detection that show promise and could help thousands of people with Lyme to get the treatment they need as early as possible after infection. Learn more

Ying Zhang, Ph.D. of Johns Hopkins Bloomberg School Health, published exciting findings on the effectiveness of certain essential oils (EOs) to treat stationary phase and persister forms of Borrelia burgdorferi. This GLA-funded study identified 10 EOs that have strong activity against stationary phase burgdorferi at a low concentration of 0.1%; and found that of the 10 EOs, those of garlic, allspice, and Palmarosa were active at even at 0.05% concentration. This finding is particularly important because while the majority of the Lyme disease patients can be cured with 2 – 4 weeks antibiotic treatment, about 10 – 20% of patients continue to suffer from persistent symptoms. Use of EOs as an alternative treatment may be effective in this latter patient population. Studies have now advanced to the stage of testing the therapeutic effects of essential oils in B. burgdorferi-infected animal models, the results of which will lay the foundation for human Phase I/II clinical studies GLA will support. Learn more

New findings show the correlation of Lyme disease-associated IgG4 autoantibodies with synovial pathology in antibiotic-refractory Lyme arthritis. Published just this month in the journal Arthritis and Rheumatology Allen Steere’s group has published that specific classes of antibody and cytokine profiles are unique to patients with antibiotic-refractory and -responsive Lyme arthritis. More importantly, this is the first study to definitively demonstrate that the level of antibodies capable of cross-reacting with Lyme disease-associated auto or self-antigens correlates with specific inflammatory symptoms in antibiotic-refractory Lyme patients.

Record Increase in Cases of Lyme and Vector-Borne Diseases in the U.S.

The CDC made two significant announcements this year. First, the annual number of Lyme disease cases has reached ~427,000, up from ~329,000. Second, combined tick, flea, and mosquito-borne diseases have tripled in the last 13 years. These announcements highlight the phenomenal increase in vector-borne diseases in the U.S. and the need for continued vigilance in protecting oneself against tick and insect bites. The CDC report also highlights the fact that an ever-expanding diversity of bacterial, viral, and parasitic vector-borne pathogens are being discovered through continued research efforts.

These findings suggest that the U.S. health agencies charged with protecting the public are tracking the increase and that these numbers are based on surveillance case reporting and not a clinical diagnosis, meaning the actual annual numbers of tick-borne disease cases is likely to be much higher.

The Impact of Climate Change on the Expanding Tick Population

Research confirms that the size and activity of tick populations are increasing and the geographic ranges of a variety of tick species are expanding. It is now commonly accepted, by the public and scientists that this is due in part to climate change. Mary Beth Pfeiffer’s book, “Lyme: The First Epidemic of Climate Change”, brought this to the forefront for many in 2018. Watch Q&A with Mary Beth Pfeiffer

The federal Tick-Borne Disease Working Group (TBDWG) issued its first report to Congress, confirming what Lyme disease patients and their caregivers have known for decades—that there is a “serious and growing threat” of tick-borne diseases throughout the nation, and that the government needs to invest more in research, prevention and treatment of these illnesses. Learn more

View Research Report or email marketing@GLA.org with any questions