In February, graduate student Alex Moresco got a diagnosis that would change the course of her life. Since then, Moresco has dedicated a large portion of her time to raising awareness of Lyme disease.

In August, Moresco held the first ever SubLyme Soiree in Chicago with the help of Global Lyme Alliance (GLA) and her background in public relations. The event raised over $60,000 — all of which will directly benefit improvements in diagnostic testing and finding a cure. Alex is pictured above on right, with SubLyme Soiree co-host, Kasey Passen.

At 22 years old, Moresco first became infected with Lyme when she visited her husband’s family in Michigan. Now 24, Moresco is working towards finding her new normal. It typically takes Lyme patients one to four years to learn how to manage the disease.

Lyme disease is complicated. Most patients suffer from co-infections like autoimmune disease or in Moresco’s case, babesia, which is similar to malaria.

Lyme is carried by ticks, which also carry over 175 different diseases and infections. A large misconception about the disease, Moresco said, is that a patient has to develop a bullseye rash to be considered infected.

There are patients who contract Lyme disease and are able to take care of it right away. Others, like Moresco, will have flu-like symptoms for months, be unable to get out of bed because of extreme pain and even suffer from memory loss for a long time before getting an official diagnosis.

The Center for Disease Control reported that there were 350,000 new cases of Lyme in the past year, but many of the doctors who Moresco saw before getting an official diagnosis were unwilling to take her seriously.

Moresco’s primary care doctor refused to test her for Lyme. Moresco said that her doctor does not “believe in Lyme,” which is something that is not uncommon.

Most Lyme patients also do not receive the treatment that they need. According to the GLA, 63 percent of Lyme patients go misdiagnosed, which is similar to Moresco’s own experience with Lyme.

If we had caught (the Lyme) earlier, I wouldn’t be going through this,” Moresco said. “I just find it so unacceptable.”

For a year, symptoms were rampant since Moresco had visited her husband DJ McKerr’s family during her senior year at DePaul. Moresco said that she began experiencing memory loss and was facing intense, painful days that made it difficult to get out of bed.

Most health insurance companies do not cover Lyme. Moresco speculates that the stigma exists because it’s so difficult to treat, and much of it has to do with the diagnostic testing that exists in the Western Hemisphere. Both women find themselves seeing a doctor qualified to treat their illness in Wisconsin.

Moresco said that her treatment ends up being anywhere between $1,500 and $3,000 per month. She takes antibiotics, a variety of supplements.

McKerr said that his wife’s illness hasn’t change the course of their lives so much as it has encouraged them both to slow down. About two weeks ago, Moresco was struggling to remember the date that she and McKerr were married.

Neurological problems like this are common for Lyme patients. At Moresco’s last visit with her Lyme doctor, she discovered that her brain is not sending signals to her throat to swallow.

“It became a life or death situation and realizing I have to see these doctors get these treatments,” Moresco said. “It’s the only way I’m eventually going to get better.”

Lyme patient Kerry Heckman, who works as a clinician at DePaul’s Center for Students with Disabilities said that many survivors are “type A”: people who need to constantly be doing something.

Moresco, for example, has cut back on work quite a bit. As a sophomore in college, she began working with Nike and eventually went on to start her own public relations company, A Moresco PR + Content Creation.

Currently enrolled in a Master’s program at DePaul, she stays in class to give her something to do. She juggles spreading awareness, being enrolled in classes and managing her company quite gracefully.

“She’s very thoughtful. She doesn’t like to talk unless she has something that she thinks can add value,” said her professor of public relations and advertising Marshall Goldman.

“I think the fact that (Moresco) is actually in this industry gives her a unique perspective for how to think about it, as well as how to connect other people to it in a way that’s positive and authentic,” Goldman said. 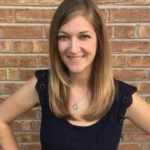 “I shared that experience because I know it’s not uncommon,” Heckman said. “It’s actually very common. Many Lyme patients will tell you that doctors have laughed or tell them that that’s not what they have.”

Like Moresco, Heckman said she does the work that she does so that others will not go through the same things that she has.

My philosophy in life is that you make sure that (people) are seen,” Heckman said. “If someone’s in pain, you have to make sure that they’re seen and that they’re validated. It was kind of the ultimate invalidation of my illness, my pain and everything I had been through. It was kind of the image of what Lyme patients go through on a regular basis is being invalidated.”

Moresco’s bimonthly podcast, “In The Lymelight,” has been created especially for people who are dealing with Lyme disease and those who want to learn more about it. A live recording of the podcast will happen at Zanies on Nov. 30. Tickets are $20 and the money collected will benefit GLA. Read the entire article on The DePaulia