Lone star ticks not guilty in spread of Lyme disease

by Admin at Global Lyme Alliance on February 1, 2018 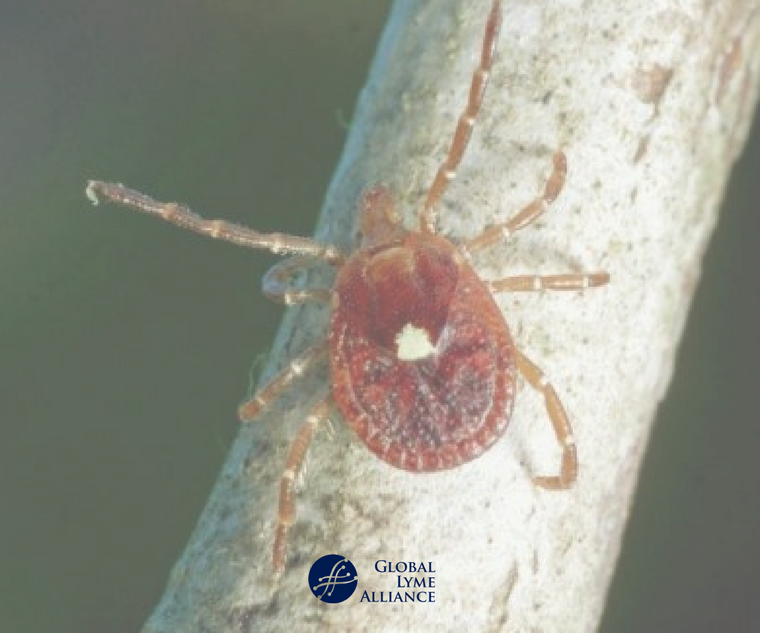 Not all ticks are alike -- particularly when it comes to their role in spreading Lyme disease.

The bacteria that cause Lyme disease, the most commonly reported vector-borne illness in the United States, are transmitted to humans primarily by the black-legged tick ( Ixodes scapularis, also known as the deer tick), which is abundant in the eastern U.S. Often presumed guilty by association is the lone star tick ( Amblyomma americanum), a southern tick species that has spread northward in recent decades. However, a new review of three decades' worth of research concludes the latter should be exonerated: While lone star ticks are guilty of transmitting bacteria that cause several human illnesses, the scientific evidence says Lyme disease is not one of them. In an article published this week in the  Journal of Medical Entomology, a group of tick researchers led by Ellen Stromdahl, BCE, an entomologist at the U.S. Army Public Health Center, argue that the lone star tick plays no role in the spread of Lyme disease, based on their comprehensive review of more than 60 published articles over 30 years. Those studies, encompassing tests on over 52,000 lone star ticks from 22 states by more than 35 research groups, lack convincing evidence that lone star ticks are spreading bacteria that cause Lyme disease, according to the authors. Lone star tick bites can indeed cause a range of human illnesses, including ehrlichiosis, Southern Tick Associated Rash Illness (STARI), and red meat allergy. STARI produces rashes that mimic those seen with Lyme disease; however, Lyme disease, properly termed "Lyme borreliosis," is caused by a bacterium named  Borrelia burgdorferi. In the eastern United States, researchers discovered 30 years ago that infected blacklegged ticks spread  B. burgdorferi bacteria to humans. Lone star ticks, which are far more common than blacklegged ticks in southern states, were also tested for  B. burgdorferiat that time. Most studies concluded that they played no role in the spread of Lyme disease, but the notion that lone star ticks were capable of transmitting Borrelia emerged, and it persists today. Advocates of this theory have pointed to a small number of early investigations that reported finding Lyme bacteria in lone star ticks and have called for additional surveillance of the species using modern techniques. "This indicated to me and my colleagues working on tick-borne disease in the Southeast that it was time for a comprehensive review of all the literature on lone star ticks and Lyme disease," says Stromdahl. "I knew that dozens of investigations of lone star ticks for the Lyme bacteria had been published more recently, in the last 15 years, but perhaps they were being overlooked because the focus of these studies was the bacteria once thought responsible for causing STARI,  Borrelia lonestari." In testing lone star ticks for  B. lonestari, these studies also included testing the ticks for the actual Lyme bacteria,  B. burgdorferi. Thus, the evidence was "hiding in plain sight," Stromdahl says, and a thorough literature search revealed papers describing the analysis of tens of thousands of ticks using definitive, modern molecular methods. "Several of the earliest studies that supported the idea that lone star ticks can spread Lyme disease used less-sensitive and less-specific laboratory techniques," says Mark Pilgard, a microbiologist at the U.S. Centers for Disease Control and Prevention and a co-author of the review. "We examined those older studies in the light of more recent findings and better laboratory techniques and assembled and reviewed an extensive number of more recent studies. We even found newer publications in which authors of the older reports re-evaluated their findings and revised their conclusions -- they had actually detected a different Borrelia that does not cause Lyme disease." A chemical found in lone star tick saliva destroys Lyme bacteria -- preventing lone stars from transmitting  Borrelia burgdorferi. "Lone star tick saliva is a very effective barrier against  B. burgdorferi -- it literally explodes them," says Graham Hickling, Ph.D., a tick researcher from the University of Tennessee who contributed to the review. "Lone star ticks are constantly being exposed to  B. burgdorferi as they feed on infected animals, but the bacteria species has never been cultured from a lone star tick in a lab. However, it has been cultured from rodents and black-legged ticks in the Southeast." Hickling adds that the lone star saliva's protective effect is evident in the greater than 99.5 percent of lone star ticks found in the research team's review that tested negative for  B. burgdorferi -- opposite the consistent findings in black-legged ticks, in which up to half of the adult ticks can be infected with  B. burgdorferi. "Even if someone did manage to prove that a handful of lone star ticks were carrying the Lyme bacteria, that is only a first step," says Hickling. "That one-in-a-thousand lone star tick would still have to be able to transmit it to a human, and we have never seen that happen." The review article notes that nine different studies have tested for transmission of  B. burgdorferi by lone star ticks, and transmission was never observed. A 10th study determined that the saliva kills the bacteria. Debunking the perception that lone star ticks can transmit Lyme disease is important because imprecise inferences about the geographical distribution of infected ticks can have negative public health consequences, says Robyn Nadolny, Ph.D., biologist and program coordinator at the U.S. Army Public Health Center Tick-Borne Disease Laboratory and co-author of the review. "The media coverage of Lyme disease might make many Americans think that a tick-bite means only one thing: Lyme disease," Nadolny says. "We aim to raise awareness of ehrlichiosis and the other problems caused by lone star ticks so that the real threat from these ticks does not go unrecognized."
Story Source: Original story printed on ScienceDaily.com Materials provided by  Entomological Society of America.  Note: Content may be edited for style and length.
Journal Reference: