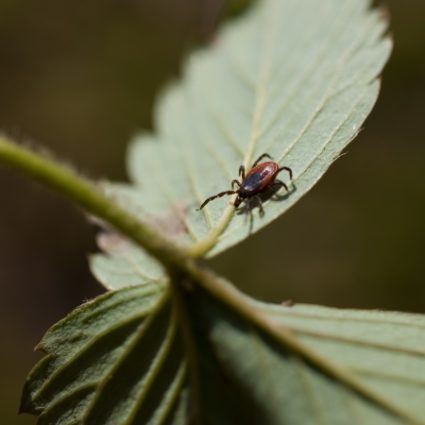 from News-Times, August 22, 2017 by Barry Lytton NEW MILFORD — An increasingly common tick-borne disease took the life of a New Milford man this month, and health experts warn that more cases are likely as tick populations flourish in New England. Michael Yoder died Aug. 8 of liver and kidney failure after a severe case of babesiosis, according to the state medical examiner’s office. He was 55. Yoder’s wife, Wendy, said her husband was an avid gardener and that she regularly helped him check for ticks, but neither saw any sign of a tick around the time he fell ill. For weeks, he had exhibited signs of a persistent stomach bug, and then of more severe symptoms, but by the time he was diagnosed the disease was irreversible.
“We had no idea whatsoever that a tick could do something like this,” she said. “A single tick. We thought it was bad when it just gave you Lyme disease. This one is a killer.” Babesiosis is caused by a single-celled protozoan somewhat like the organism that causes malaria. It invades the red blood cells, and in extreme cases can cause anemia so severe that organs fail. Reported cases are on the rise in the state and nationally, and though the disease is rarely fatal it can put people in the hospital for days. Connecticut has seen an increase in babesiosis cases from 74 in 2011 to 205 in 2014, according to the Centers for Disease Control. But fatal cases are relatively rare, according to the state Department of Public Health: Just one death was reported in 2015 and one in 2016. “Most human infections are acquired from infected deer ticks, so prevention primarily depends on avoiding tick bites, as for Lyme disease,” said Dr. Randall Nelson of the state health department. “However, infections from blood transfusions from an infected donor have also been reported.” Dr. Paul Nee, an infectious disease expert at Western Connecticut Health Network, said the disease has definitely gained a foothold in greater Danbury. “Every year we’ve been seeing it more and more, and with more cases, we see more severe cases,” Nee said. Over the past 8 months, Nee said, he has seen 55 babesiosis cases confirmed by blood tests, compared to 41 confirmed in all of 2016. In New Milford, the town Health Department has seen 13 cases this year, compared to eight cases in all of 2016. Since 2013, the average number of cases has hovered around 15 a year. “Tick-borne diseases as a whole are up,” Nee said. WCSU researchers earlier this year reported finding the highest numbers of deer ticks, a common carrier of both Lyme disease and babesiosis, since they started field monitoring in 2011. The disease gives most people flu-like symptoms, including fever, drenching sweats, muscle or joint pain and malaise, according to the state health department. A breakdown of the red blood cells, called hemolytic anemia, is also common. Some patients can be treated as outpatients, requiring treatment only with anti-malarial drugs and antibiotics. But others — generally those whose immune systems have been compromised in some way — can require hospitalization and might need blood transfusions. Yoder had had his spleen removed in the 1980s, said his sister, Dawn Schappach. “He had a lot of those the things they say are deadly when combined with the disease,” she said. Read the article on NewsTimes.com