by Admin at Global Lyme Alliance on November 4, 2016 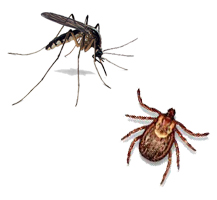 Omaha World-Herald, November 4, 2016
Zika-carrying mosquitoes had their moment this year as the nation’s top headline-grabbing pests, but the arrival of cooler weather means the resurgence of another disease-carrying insect. Ticks transmit a number of diseases, including Lyme disease, that affect people and pets. And while cold weather may kill off mosquitoes, ticks remain a year-round threat.
The ticks that spread Lyme disease — adult black-legged or deer ticks — are most active during fall and winter, according to the Companion Animal Parasite Council (CAPC), which predicts 2016 will be a banner year for ticks. Annually, about 300,000 people are diagnosed with Lyme disease, the Centers for Disease Control and Prevention estimate.

The CDC lists 15 different diseases transmitted by ticks, including Lyme, anaplasmosis, two types of rickettsiosis, Rocky Mountain spotted fever and tick-borne relapsing fever (TBRF). These diseases can vary greatly in severity and duration; some can be debilitating and even fatal. 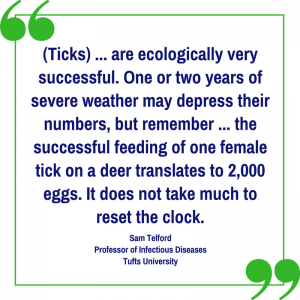 Ticks thrive virtually everywhere in the country, with different species preferring different locales. While ticks are commonly found in heavily wooded areas, they also thrive in domestic settings such as gardens, landscape plantings and backyard grasses. In fact, experts estimate that the majority of people who contract tick-borne diseases came in contact with the tick that made them ill right in their own backyards.

Ticks hang out on shrubs, trees and in grass waiting for a host to pass by. Hitching a ride on suburban deer and other animals, including pets, is one of their main means of transportation. Cooler weather means deer are more likely to come closer to homes looking for mates, or to dine on suburban landscapes as wild food sources dwindle.
Ticks may travel to your backyard riding on the deer that’s dining on your landscaping, only to stay behind when the deer moves on. Once they’re in your environment, it’s just a waiting game for the tick to find a host; a person, dog or cat passing by.
While you may know the need to inspect humans for ticks after spending time outdoors, it can be harder to detect their presence when they’re hidden in pet fur. Both dogs and cats can pick up ticks that they bring into your home, where the tick may transfer to a human or stick with the pet and make it sick.
The CDC recommends homeowners discourage deer away from residences in order to help minimize potential exposure to ticks.
“Tick populations do not decrease substantially unless deer are eradicated or severely reduced,” the CDC says.
Read the entire article on Omaha-World Herald
Read more about Fall Tick Season and How to Protect Your Family