by Admin at Global Lyme Alliance on October 3, 2022 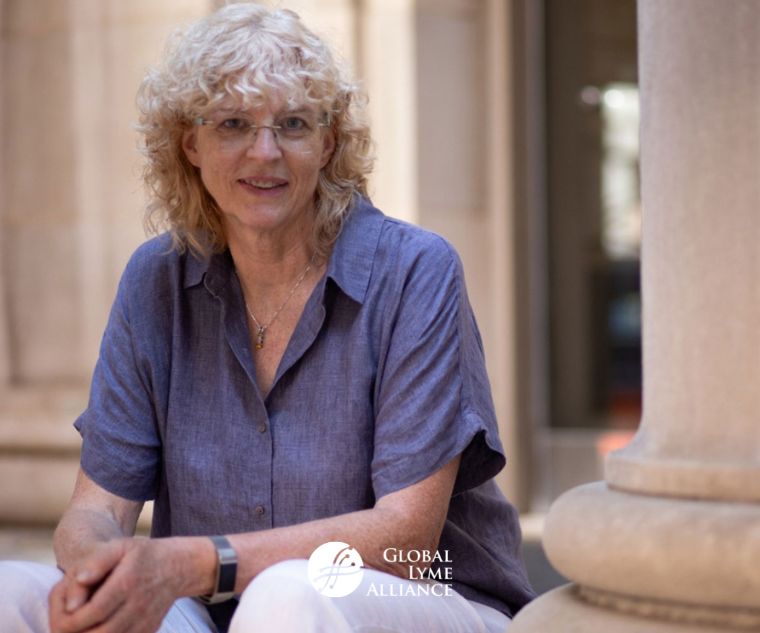 GLA funded researcher Dr. Nicole Baumgarth represents an excellent choice as the inaugural director of the Johns Hopkins Lyme and Tickborne Diseases Research and Education Institute. Dr. Baumgarth has made significant contributions to our understanding of disease development and resolution following infection with Lyme disease. This knowledge uniquely positions Dr. Baumgarth to develop innovative approaches to prevent and treat Lyme and other tick-borne diseases in humans rather than mice.

Baumgarth is a highly regarded researcher known for efforts to understand host responses to Borrelia burgdorferi, the bacterium that causes Lyme disease. The bacterium is transmitted to humans through the bite of infected blacklegged ticks. Research suggests that Lyme disease affects upwards of 450,000 people in the U.S. each year. Some patients go on to have lingering symptoms for years.

Founded in 2020 with the support of several philanthropic gifts, the Johns Hopkins Lyme and Tick-borne Diseases Research and Education Institute resides in the Bloomberg School’s Department of Molecular Microbiology and Immunology. As director, Baumgarth will lead the Institute’s research in four areas: vector/tick biology, epidemiology, microbiology, and host immune defense. She will also guide the Institute’s research training and public outreach focused on the increasing threats of Lyme and other tickborne diseases to public health. Besides Lyme disease, ticks play a role as carriers and/or reservoirs in over a dozen lesser-known diseases. Some, like Rocky Mountain spotted fever, are caused by bacteria, while others are caused by parasites or viruses.

Baumgarth was most recently a professor of immunology at the University of California, Davis, in the Department of Pathology, Microbiology, and Immunology and the Center for Immunology and Infectious Diseases. At UC Davis, she ran the Baumgarth Lab, which she launched in 2000. She also developed and chaired the UC Davis immunology graduate program.

“Our goal to prevent and ease suffering from Lyme and other tickborne diseases is more urgent than ever, and we are grateful for the experience, vision, and drive that Dr. Baumgarth brings to her new role,” says Bloomberg School Dean Ellen MacKenzie, PhD, ScM. “She is ready to expand the Institute’s efforts in research, training, and outreach and her work as inaugural director will have a far-reaching impact on the fight against tickborne diseases.”

“Lyme disease is an enormous understudied public health problem. We are very excited that Nicole Baumgarth will guide the Institute as our colleagues work to identify new approaches to prevent and treat Lyme disease and other tickborne diseases and their associated complications,” says Arturo Casadevall, MD, PhD, Bloomberg Distinguished Professor and the Alfred and Jill Sommer Professor and Chair of the Bloomberg School’s Department of Molecular Microbiology and Immunology. Casadevall served as the Institute’s acting director until the arrival of Baumgarth.

Currently there is no comprehensive surveillance system tracking Lyme disease cases in the U.S. The Centers for Disease Control and Prevention reports out annual Lyme disease cases, based on filings from state health departments and the District of Columbia, at approximately 30,000 a year. The CDC notes that this number does not capture each Lyme disease diagnosis. A 2021 study based on insurance claims estimated that approximately 476,000 people in the United States were diagnosed and treated for Lyme disease each year between 2010 and 2018.

Ticks often become infected with the Lyme-causing bacteria from infected small rodents and birds, which serve as natural reservoirs. Baumgarth’s research identified ways in which the bacteria can evade and even suppress the immune system of these infected reservoirs, avoiding elimination. Understanding the effects on infected hosts’ immune systems can provide clues as to why humans may be unable to clear the infection—or may suffer long-term symptoms—if the infection is not rapidly diagnosed and treated. Baumgarth will continue these studies through collaborations within the Institute and across Johns Hopkins.

“I am honored and excited to join the Bloomberg School of Public Health and lead its efforts to build an institute that combats this threat by conducting comprehensive and novel research and providing research training on the biology of ticks, the pathogens they carry, and the diseases they cause,” says Baumgarth. “By leveraging existing expertise at Johns Hopkins and pursing new opportunities, we hope to provide impactful scientific evidence that can guide the development of new public health measures to curb the impact of tickborne diseases on human health.”

She has been elected a fellow of the American Association for the Advancement of Science and has received awards for her studies on immunity to Borrelia burgdorferi from the Global Lyme Alliance and the International Lyme and Associated Diseases Educational Foundation.

Baumgarth received a clinical degree in veterinary medicine and a PhD in microbiology from the School of Veterinary Medicine in Hanover, Germany. Prior to joining UC Davis, she conducted postdoctoral research training at the Walter and Eliza Hall Institute and the Queensland Institute of Medical Research, both in Australia, and at Stanford University.