by Admin at Global Lyme Alliance on September 13, 2016 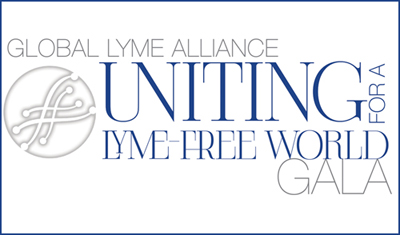 Greenwich, Conn (September 13, 2016) - Global Lyme Alliance (GLA), the world's leading organization dedicated to the research and eradication of Lyme and other tick-borne diseases, will be honoring several high-profile and influential individuals on October 13 th when the organization hosts its second annual "Uniting for a Lyme-Free World" Gala at Cipriani, 42 nd Street in  New York City.
The four individuals to be honored – Bella Hadid, International Supermodel - Heather Glass, Designer and Retail Executive - Arthur J. Mirante II, Principal and Tri-State President of Avison Young - Karen Peetz, President of BNY Mellon - all have personal experience with Lyme and are committed to playing an active role in finding a cure for the disease.
"We are delighted to celebrate these outstanding individuals on what promises to be a very special and memorable evening," said GLA CEO Scott Santarella. "All of the honorees have demonstrated an exceptional commitment to improving the quality of treatment for individuals suffering from Lyme. Through their efforts to raise awareness and support additional research, we will be able to develop more accurate testing and, ultimately, find a cure for this perilous disease." Bella Hadid, international supermodel and GLA honoree, said, "Lyme disease has taken away my lifelong dream to become a professional equestrian. It has dramatically altered my life and that of my family. I want to educate people about the very real dangers of Lyme disease and help bring greater awareness to its impact on people all over the world." The evening will feature special live performances by two Grammy Award-winning artists, David Foster and Rob Thomas. The event will be hosted by morning news anchor, Rosanna Scotto, of "Good Day New York." Celebrated event planner Lawrence Scott is donating and designing the decor for the event. Last year's event raised nearly $3 million in charitable donations to help GLA in its ongoing mission to conquer Lyme disease and its co-infections through science and research. GLA has gained national prominence for funding the most promising research in the field, while expanding education programs for the general public and physicians. The co-chairs for the event Carlos Brito and Sabine Chalmers, Anheuser-Busch InBev; Christopher Corrinet, CBRE; Matthew Glass, Texby Associates, Inc.; Yolanda Hadid, Actress & TV star; Ally Hilfiger, Advocate & Fashion Designer; Dee & Tommy Hilfiger; Mitti Liebersohn and Anthony Lopresti, Avison Young; Brian Ruane, BNY Mellon; Andrew Saunders, Saunders & Associates; Larry Scott, Lawrence Scott Events; Kim Seybert, Kim Seybert Inc. Cases of Lyme have been reported in all 50 states and more than 80 countries, making it a health crisis with worldwide impact. The number of cases reported annually has increased nearly 25-fold since national surveillance began in 1982. 329,000 people in the United States alone contract Lyme disease each year, according to the Centers for Disease Control and Prevention. There are currently no accurate diagnostic tests for Lyme disease. Left untreated, the disease can continue to spread throughout the body, often leading to debilitating health consequences. Even following proper diagnosis and treatment, many individuals continue to experience symptoms of Lyme, including severe arthritis, persistent fatigue, impaired vision, memory loss and other cognitive problems. There is no test to definitively prove that Lyme bacteria have been eradicated or that an individual has been cured following treatment. The Global Lyme Alliance Gala will be held on October 13 th at Cipriani 42nd Street, 110 East 42nd Street at Park Avenue, NYC and features a cocktail reception at 6:30 p.m., dinner and awards ceremony, at 7:30 p.m. To reserve a table or inquire about sponsorship opportunities, please call Camy Calve Events at 212-218-4080 or email Camy.Calve@GLA.org.