“Time For Lyme” Gala Raises Over $850,000 For Tick-Borne Disease Research 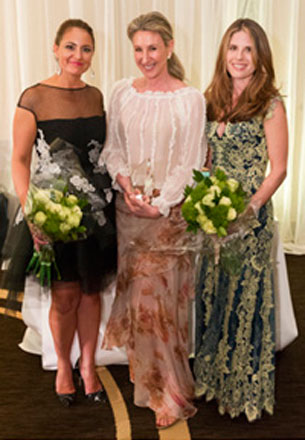 The “Time for Lyme” Gala, held on Saturday, April 11 at the Hyatt Regency Greenwich, raised over $850,000 to fund research and ultimately a cure for Lyme and other debilitating tick-borne diseases.

“We are extremely grateful to our sponsors, volunteers, donors, friends and families who made this year’s Gala such a success,” said Robert Kobre, Global Lyme Alliance’s chairman. “Their dedication to advancing research and education initiatives to ultimately find a cure for Lyme and tick-borne diseases is extraordinary.

For the second year in a row, Fox News personality Gretchen Carlson, host of “The Real Story with Gretchen Carlson,” served as Mistress of Ceremonies. In her heartwarming opening remarks, Carlson, a Greenwich resident, talked about her experience with Lyme and said “I don’t want my kids to get this disease.”

Honored at the event was Westport resident Jane Green, the British-born author of 15 New York Times best-selling novels, who received GLA’s Star Light Award for lending her voice to the fight against Lyme disease. Like many Lyme patients, Green struggled for more than two years before she was properly diagnosed.

At one point during that period, Green was told she had bi-polar disorder, was given anti-psychotic medications, and experienced fatigue so severe she was unable to get out of bed. Today, she is still dealing with post-Lyme issues, but has “far more good days than bad.” In words comforting to those now struggling with the disease, Green said that despite all she’s gone through, she enjoys “a really full life.”

Prior to Green receiving her award, renowned Lyme disease researcher John N. Aucott, M.D., founder and past president of the Lyme Disease Research Foundation, received the Lauren F. Brooks Hope Award for his work as Principal Investigator for the landmark SLICE (Study of Lyme Disease Immunology and Clinical Events) project, the first prospective controlled study in the U.S. to examine the impact of Lyme disease on long-term health outcomes and immune functions. Dr. Aucott, a practicing clinician in Maryland and part of the teaching faculty at Johns Hopkins University School of Medicine, was honored for making significant strides in research and treatment in pursuit of a Lyme disease cure.

In addition to the Gala, on Friday and Saturday, GLA hosted a closed-door Lyme Research Symposium for 20 eminent members of the scientific community who are either current or past GLA grant recipients or members of GLA’s Scientific Advisory Board.

“We had so many more researchers attending our annual scientific symposium, and so much research to cover, that for the first time we held a two-day research symposium,” said Harriet Kotsoris, M.D., GLA’s chief scientific officer. “The symposium was a unique peer-to-peer scientific forum at which we were able to exchange information and resources, in the interest of accelerating the discovery process.”

This year’s “Time for Lyme” Gala also celebrated the merger of Lyme Research Alliance and Tick-Borne Disease Alliance. The event marked their first joint fundraiser since the organizations signed a definitive agreement in February 2015. GLA is now the largest tick-borne disease organization in the nation and is dedicated to conquering Lyme and tick-borne diseases through research and education.