Adjusting to a Lyme Diet

For anyone familiar with the Lyme diet, you will know that while it is a useful healing tool, it’s also incredibly restrictive and difficult to adopt. Most Lyme patients are usually told to reduce foods that cause inflammation and this means eliminating gluten, lowering carbohydrate intake and limiting or entirely stopping dairy and sugar.

When I first made the transition to the Lyme diet I was a new college freshmen. The day after the doctor prescribed the diet I remember walking into the dining hall and letting out a cross between a laugh, a groan and a sob. There was absolutely nothing there I could eat. Spaghetti? Nope, for it contained tomatoes and gluten. Tacos? No again, corn and cheese. A veggie burger perhaps? That contains beans and wheat. A simple sandwich then? Well, not one with either chicken or bread.

Sitting down to eat with my plate of lettuce and carrots I suddenly experienced a very strong desire to throttle my doctor. She said that making the transition might be difficult, but that eventually I would adjust. But this diet was impossible! When exactly is ‘eventually’ anyway? Would that be before or after I died of starvation? Two minutes later I stalked out of the dining hall and proceeded to down a pint of ice cream while watching Parks and Recreation followed by a 30 Rock marathon in my dorm.

This was not a good start to my new Lyme diet.

Although I had been a healthy eater before Lyme, starting at Phase 1 of the diet seemed less of an uphill battle and more a cliffside plunge. Gone were my precious black beans, tomatoes and bell peppers. Locked away were my bananas, yogurt and peanut butter. And I hadn’t even begun to mourn the loss of ice cream, chocolate, and cookies!

As my Lyme disease advanced, I was forced to medically withdraw from college and return home. Despite the setback, I continued to plug along with the doctor’s orders. Breakfast was the easiest meal, eggs and a smoothie, but I missed slathering jam over English muffins or sharing extra cheesy homemade corn grits with my mum.

Lunches and dinners were a nightmare of endurance. Although we had Recipes for Repair: A Lyme Disease Cookbook, my family and I longed for our old standbys. Almost every one of our old recipes had an inflammatory ingredient and most of my dinner preps would end with me letting loose a couple choice expletives (though this  exercise was not limited to the kitchen).

During one such meltdown my mother gently coaxed me out of the kitchen to the living room, promising she would take care of dinner. She made me a cup of tea and let me cool off before joining me. She had noticed my increasing frustration with the diet and, though she supported my efforts, she recognized it was doing more harm than good. My mum agreed that gluten, dairy and sugar needed to be reduced but she recognized we couldn’t handle going all the way to Phase 1 of the diet. Moreover, after consulting a second doctor, we concluded my case didn’t warrant Phase 1 and switched to my mother’s more sensible dietary plan.

The next day we went on a grocery store shopping spree followed by a raid of our library’s cookbook section. When we returned home with our arms full of books and shopping bags, we were ready to tackle some new recipes. Our kitchen was now stocked with berries of every color, a forest of leafy greens, a myriad of strange and exotic vegetables, nuts and seeds of every shape and size, and spices from around the world.

With my cast-iron skillet in hand and a renewed enthusiasm for cooking, we figuratively ate our way across the planet. One night, as I wiped my eyes from the stinging onions and pungent garlic, the lights from St. Peter’s Basilica twinkled outside my window. The next night we sat on a New England beach, the salty breeze stinging our eyes as we slurped seafood chowder (dairy-free and gluten-free naturally). In the mornings we inhaled the sweet air of the English countryside over a bowl of fresh oats, honey and blueberries. And so each meal brought us to a different corner of the globe.

The anti-inflammation diet had become less of a schlep for me through culinary purgatory and more of a gastronomic expedition around the world. Although  are still times when I slip up and sneak a fresh baguette or a wedge of extra sharp cheddar into the grocery cart, those times are rare and enjoyed on only very special occasions.

Since starting mum’s dietary transition, I have fewer bad days and can manage my symptoms more effectively. Now I hardly give my restrictions a second thought. Who cares that I can’t have pizza when there’s Moroccan-spiced salmon, chana masala, or delicata squash soup? 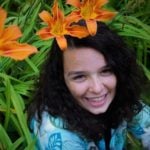 Emily Croot is a student, writer, and cook splitting her time between New Hampshire and Union College in New York. She wants to help others and change her little corner of the world one person at a time.