With all the pills, vaccines, collars, and topicals spent on tick prevention methods for dogs, why do cases of Lyme disease and other tick-borne illnesses in dogs continue to rise?

It’s hard to miss all the tick prevention ads for dogs on TV, from pills to collars and everything in between. And if you’re a dog owner, you can’t leave the vets office without tick prevention being part of your dog’s preventative health plan. With the flea and tick product market estimated to hit $1.34 billion by 2025, it’s clear pet owners are taking disease prevention seriously. So why are more dogs getting Lyme disease now than ever before? 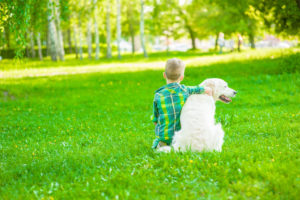 Why are tick-borne disease cases increasing in dogs despite a plethora of tick preventative measures, including collars, sprays, pills, powders, vaccines? The number of positive cases of canine Lyme disease has climbed by almost 40% in the last four years (from 245,971 in 2015 to 359,461 in 2019), according to the Companion Animal Parasite Council (CAPC), a nonprofit dedicated to increasing awareness of the threat parasites present to pets and family members.

Ticks are now a year-round threat

Dr. Mary Labato, veterinary internist and clinical professor at Cummings School of Veterinary Medicine at Tufts University, believes multiple factors such as climate change, reforestation, and new suburban developments that push into local fields and woods are playing a role in the increase of tick-borne diseases.

For one thing, not all pet-owners realize that black-legged ticks—the primary carrier of the Lyme disease bacterium—have become a year-round threat. Although winter is underway, ticks can still be found in leaf litter, brush and decaying vegetation—all areas where pets are at risk of picking them up and passing them on to you and your family.

Many people think that ticks die in winter and so they do not need to use tick-control medication during traditionally cold months, like January or February. But stopping anti-tick medications during the winter months is risky. Ticks are quite resilient and most manage to get through the winter just fine. All they need is one day with temperatures of 40 degrees or higher to emerge and begin searching for a blood meal. This past January, for example, in New York State alone more than a dozen days were sufficiently warm for ticks. 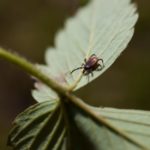 “In the past we didn’t expect to come across ticks in the dead of winter,” said Dr. Ann Hohenhaus, staff doctor at New York City’s Animal Medical Center. “But the past couple of winters have been mild, which means ticks are active for more months of the year, increasing the risk of Lyme and other tick-borne diseases in pets.”

Moreover, Lyme disease is spreading to areas once not considered to be at high risk for tick-borne disease. Historically, ticks were mostly found in the Northeast and Upper Midwest. But starting in the second half of the 20th century, developers increasingly pushed into forested areas to build housing. Therefore, more homes and businesses now exist in previously forested areas, which are home to animals such as white-footed mice, deer, and chipmunks which host ticks. “Suburbia has now moved into fields and woods taking away wildlife-exclusive areas,” said Dr. Labato. “So people and dogs are spending more time together in areas where they come in contact with ticks both from the foliage and the wildlife.”

According to a new study from CAPC, Lyme disease prevalence has also been spreading in states not traditionally considered to be at high risk for the illness. These include regions in Illinois, Iowa, North Dakota, Ohio, Michigan and Tennessee. Two decades ago, you would never have seen ticks, for instance, in Northern Minnesota, and now you do.

Dr. Goldstein emphasizes that in Lyme-endemic areas, every dog should be protected by their owner by “administering high-quality tick products and taking them [their pet] to their veterinarian to receive an annual Lyme vaccine.” However the use of the vaccines for dogs has been widely debated so talk to your vet about what’s best for your pet.

Yet despite the many anti-tick products on the market, some pet-owners are reluctant to use those that contain pesticides. Instead they may opt for a natural remedy, such as a product with essential oils, whose efficacy is unproven. There is no proof, for example, that apple cider vinegar, which is recommended by a number of websites as a tick preventative, works at all.

For that matter, not even highly effective brand name products will stop or kill 100 percent of the ticks your pets encounter. A 2017 Centers for Disease Control and Prevention initiative surveyed 2,727 households in three states where Lyme disease is endemic—Connecticut, Maryland and New York. More than half had a dog, cat or both in the residence and about 88% of those households reported using some form of tick control. Despite this about 20% of households with pets still found ticks on their animals.

Veterinarians are quick to point out, however, that preventatives only work if they are conscientiously used. “Market research indicates that pet owners are not 100% compliant,” said Dr. Hohenhaus. “Just because pet owners have the medication doesn’t mean they apply it on the schedule prescribed by their veterinarian.” 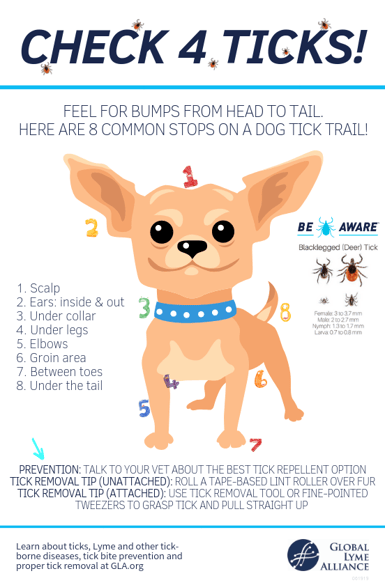 Moreover, Dr. Labato says: “With more options for prevention, we become complacent and rely on the sole activity of the tick preventative. But you still need to check each day for the presence of ticks on dogs, cats, and people.”

If a tick bites your dog, it can transmit Lyme bacteria. That’s why Dr. Goldstein also stresses the importance of checking for ticks and removing them every day. “Go through your pet hair by hair,” he said. “Look at the paws. Look at the ears. Look around the muzzle, the face.”

Dr. Goldstein also suggests setting up perimeter boundaries in yards. “If you’re up against woods in your yard,” he explains, “a barrier of wood chips or pebbles will prevent ticks from going across your property. They can be carried across it by an animal, of course, but at least they won’t cross such a barrier like that without assistance.”

“The most important thing to stress is prevention.”