Honoring the Past, Embracing the Future 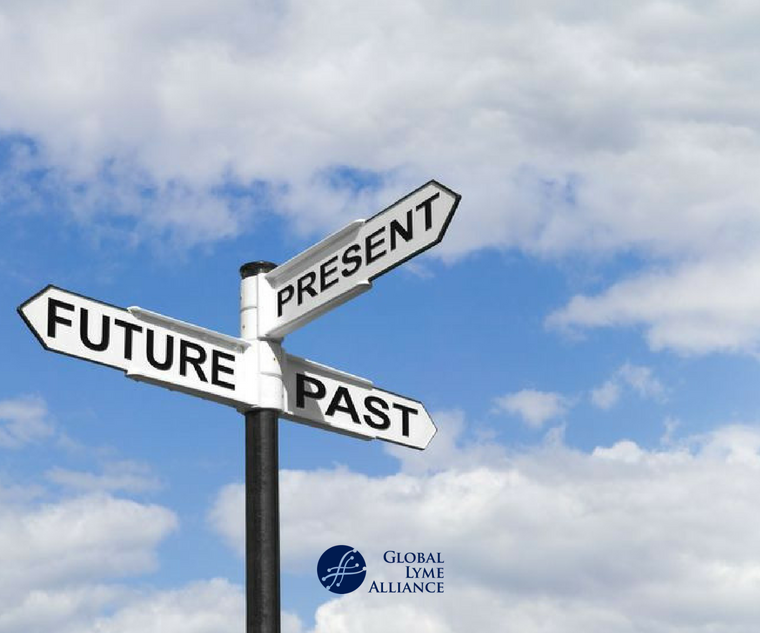 A friend recently shared with me the news that her grandmother had passed away. “She was 97,” she said. “It’s not like we didn’t know it was coming, but it’s still sad.”

“Of course it is,” I told her. “You loved your grandmother, and her passing marks the end of an era. You have to grieve and honor that.”

Then I realized I could have been talking to a Lyme patient, or to anyone whose life has been changed so decisively that they can mark a before and after period. Sometimes these distinctions are normal and expected—losing a beloved grandmother, moving from childhood to adulthood or from single life to marriage.  But they can still have their own difficulties, and still require time for one to acknowledge the transition. It’s harder when life throws an unexpected curve ball. Say, when a young person dies tragically young, or when a spouse leaves suddenly, or when cancer shows up, or when a tiny tick surreptitiously bites you, forever changing the course of your life in ways you could not have anticipated.

When those types of life changes happen, the distinction between before and after can be dramatic, and there can be anger, frustration, and sorrow over the fact that the shift happened against your will. I often talk about my life in terms of before and after I became ill with Lyme and several other tick-borne co-infections. I’ve worked hard to reclaim my identity, realizing that some of the activities I used to enjoy “before” can still be a part of my “after” period, just in more adaptive ways. I’ve realized that the core parts of who I am—my values, my sense of humor, my care for others—transcends that divide in my life.

But I’ve also learned that it’s important to grieve for and memorialize our lost selves, just as it’s necessary to do so for a person who has died. Grief in the context of death honors those who have passed, and helps those who are living move forward without their loved ones. Grief in the context of chronic illness or distinct life change is similar. It’s difficult  to accept who we are now— in the “after” period— without properly acknowledging who we were before.

For years during my illness, I ignored winter. If I couldn’t ski, well, then winter simply wasn’t happening for me. Once I did finally get back on my skis, in a less intense way than I had before, I was able to see that my denial of winter was a stage of grief. They’re called stages for a reason. You may spiral between them, ever moving towards acceptance and healing, but you aren’t supposed to just stay in one of them.

Had I never been able to ski again, I would have had to deal with the anger and sadness of that reality, rather than continuing to deny it. If I had stayed in the denial stage, I would have gotten stuck, never allowing myself to move forward with a life that includes, but is not defined by, chronic illness.

I know this because there are other parts of my “before” life that I have had to give up. It’s unlikely that I’ll ever waterski again, not just because of Lyme but because of other health concerns. I probably won’t stay up until midnight, make it to the end of a wedding reception, dance my socks off at a party, hike a mountain, or ride a bicycle. I can’t travel to high altitudes, where the lack of oxygen will affect my babesia symptoms. This last one has been one of the hardest to accept. I was living in Colorado when I first got sick. I left my bike there as collateral for when I came back.

Since that time I have reached remission but not the ability to travel cross-country or to high elevations. My bike has been sold. My old apartment has been torn down and reconstructed by developers.  Children I knew in my time there are now adults. I’ve missed so many graduations, weddings, and even funerals of my Colorado friends.

I can accept this reality now, because I allowed myself time to be angry and upset at the injustice of it all. And I also took the time to memorialize—that is, simply to remember the way things were— the life I once had in Colorado. The process has included writing this piece, sure, but also framing some of my favorite photos from before and displaying them in my current Boston apartment. I’ve also created scrapbooks of memories. I stay in touch with friends who still live in Colorado, who have helped me bridge the divide between before and after. One of them flew to Boston for my recent birthday. We reminisced about old times, lamented the events I’d missed, and most importantly, created new memories that I can carry into the future.

There are even bigger parts of myself, of my life, that I don’t yet know for sure are gone, but could possibly be. No doubt some of these will surprise me in the years to come. Managing a chronic illness at 40 years old, I don’t know if I’ll ever bear my own children. I might, just as there might someday be a cure for babesia that will allow me to travel to high altitudes, just as there might someday be a cure for Lyme that will allow me to do all of the other things I’ve had to let go of. I hold on to hope, but I also face reality. I’ve had to take the time to really think about, mourn, and ultimately embrace that reality. I feel grateful to be well enough to even raise a child, even if it turns out I can’t bear one. I’m open to—indeed, excited about—the possibility of adopting or becoming a step-parent someday.

It’s taken me time to get to this place, and the path is different for everyone who seeks to get here. Some women in my position, for example, are as tied to having biological children as I was to living a ski-based life. Their grief, their fear of the unknown, is understandably overwhelming. There are some things we can never quite let go of, just as life without a loved one is never quite the same.

It’s okay to miss the people and the lives we have lost, and it’s also okay to embrace who and what we are today— what we can do in these after periods. Memorializing someone or something is bittersweet. I thought about this with the recent celebration of Memorial Day. Perhaps it’s at the end of May because it marks and honors those who have left us, just as a new, bright season begins to dawn. The day and all it symbolizes are important. So, too, is the time that comes after it.