From Lyme to the NYC Marathon’s Finish Line

Running a marathon of 26.2 miles is a herculean effort even for most healthy people. But for those who suffer a chronic health issue, like Lyme disease, it requires determination and drive that most of us couldn’t even imagine.

On November 6, 2016, Toni Blanchard, of Greenwich, CT and Jesse Ruben, of New York, both members of Global Lyme Alliance’s Young Leaders Council, became the first Lyme patients to run the New York City Marathon for Lyme disease research. Wearing GLA T-shirts created especially for the race, Toni and Jesse ran to spread awareness about Lyme disease and the need to raise funds for further research. They set up a Crowdrise account and, together, raised over $15,000 for GLA.

Crossing the finish line was a dramatic achievement for both runners. Recently we caught up with them to talk about their success. We hope it will inspire those working their way back to health.

Can you tell us about your experience with Lyme disease?

JR: I started feeling ill at the end of 2012 and was diagnosed in September 2013. During the time when I didn’t know what was causing my symptoms, I was dizzy, nauseous, had brain fog, crawling sensations in my body. At one point I couldn’t even walk up a flight of stairs. I was a mess. After I was diagnosed, I went through nearly two years of treatment. My symptoms slowly lifted and I felt like I became a human being again.

TB:  I was diagnosed when I was six so I never knew what feeling “normal” meant. I had terrible body pains when I was young and my feet would hurt to walk. I experienced exhaustion and tremendous difficulty sleeping, but this was all normal for me, so growing up I never understood that I was compromised. Since I was young, running and exercise in general have been important elements in my recovery.

What made you decide to run in the marathon? 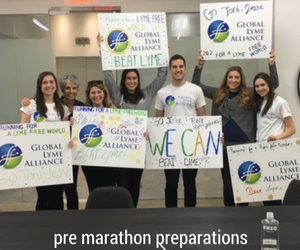 JR: The first thing I wanted to do after my recovery was run the New York City Marathon for Lyme research. At first I was told I couldn’t: no Lyme-related charities were registered. Luckily, I had gotten a spot in the marathon lottery. Once Toni and I discovered we both had spots in the race, we decided to set up the Crowdrise account so that people could donate to GLA on our behalf. It was an opportunity to be a voice for people who couldn’t run the race and to raise funds for the organization.

TB: I always wanted to run the marathon. Running has been a huge part of my health regimen. It allows me to detoxify my body and clear my head. The marathon was an opportunity to run for GLA, for the Lyme cause and for all Lyme sufferers, especially the kids.

Did having Lyme affect your training?

TB: I did a half marathon in April, but I didn’t start intense training until August. At the end of September, I did a 20-mile run in Greenwich and then I had to take a week off. My body wasn’t able to handle the intense training and from then on the longest I ran was 12 miles.  I questioned whether I could do the marathon, but I had already raised money for GLA and I didn’t want to let down all who had donated, so I decided I would walk to the end if that became necessary.

JR: My energy level and muscle recovery were affected. I did a 20 mile run about a month before the marathon. I noticed my body didn’t bounce back as quickly as it did before I got Lyme disease. I had to give myself an extra day to rest after my runs.

What was it like to run in the race? 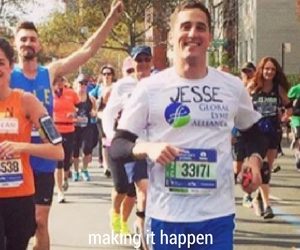 TB:  I was having trouble breathing and became quickly dehydrated. By mile 18, I was breaking down and I didn’t know how I’d be able to finish. It came down to my doing a run-walk and just putting one foot in front of the other. I was really dehydrated and nearly collapsed at the finish line. I then had to spend over an hour recovering in the medical tent. I finished in 4 hours, 12 minutes, but I expected to run it faster.

JR: I got a stomach flu the day before the marathon. That morning I had to ask myself, “okay, is this going to happen today?” I decided I would do the race, but I would run slowly and steadily. Instead of trying to break a record, I ran very, very slowly and finished in 5 hours, 11 minutes. The experience was emotional for me. At mile 22 or 23, I began to think “I want this to be over,” but I then thought about all the doctor appointments, IVs and what I went through to get to the race and I tried to stay in the present.

What was the best part for you? 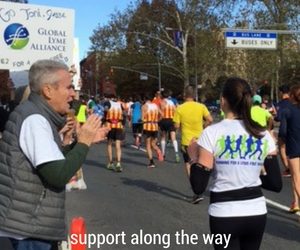 TB:  It was great wearing the GLA T-shirts that were created for the race—they really stood out.  I was amazed to hear so many people along the path yelling out to me about their experience with Lyme. I also was so touched at the start when we were all gathered at the Verrazano Bridge. It’s such an international event and listening to all the different languages was amazing. Plus the support of everyone, especially little kids, along the route was great.

JR: It was a four-year journey between the last marathon I was able to run and this one—so it was very meaningful for me.  Representing the Lyme community was also very special. A lot of people at the event talked with me about Lyme.  Everyone knows someone with the disease.

Would you do it again? 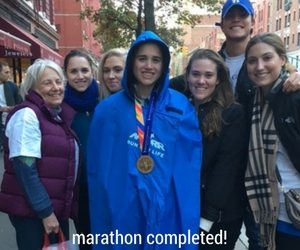 TB: It’s something I’m thinking about. It’s given me a lot of confidence going forward. It’s an opportunity to spread the word and raise awareness. It can be difficult to imagine getting better, but I want to give people hope and show those who are suffering that it will be okay and they can overcome.

JR: I am going to do it the next year, the next year and the next year. I can’t wait. But I’m not just running for me. Thousands of people are suffering from this disease and feel like there’s no hope. I want to show people with Lyme there is something besides the anxiety and fear that they feel day after day. I hope we have given people hope for their own recovery.