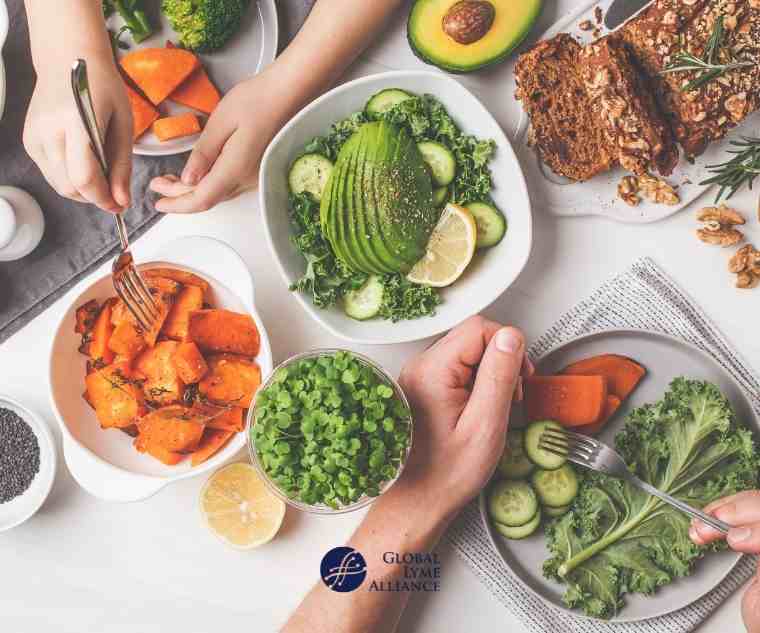 Part 2: GLA's Lyme and Nutrition Series. Lindsay Christensen is a Clinical Nutritionist and a Certified Functional Health Coach. She's sharing information on what foods are optimal for those living with Lyme disease.

In Part 1 of this blog series, we discussed why eating an anti-inflammatory diet is an essential first step for supporting Lyme disease recovery. In this blog, we will discuss the crucial effects of micronutrients on immune function and how to acquire these nutrients through a whole-food diet to support your Lyme recovery process.

A Brief Primer on Your Immune System and Lyme Disease

Having a basic understanding of how the immune system functions with Lyme disease is essential to understanding how nutrition can be used to support it.

Your immune system is a complex system that works through the coordinated efforts of various cells, antibodies, and other chemicals to protect our bodies against foreign invaders, such as bacteria, viruses, and parasites that can make us sick. The immune system can be broken down generally into two branches: The innate immune system and the adaptive immune system.

Research suggests that dysfunction of the initial innate immune response to Borrelia may play a role in the development of chronic neuroborreliosis or chronic infection of the nervous system by Borrelia. Having a better-functioning innate immune system right from the get-go may improve Lyme disease outcomes. Nutrition, including many nutrients such as vitamin D, is known to powerfully impact innate immunity. (3)

The adaptive immune system responds to foreign invaders, such as bacteria and viruses, in specific ways. It creates antibodies, which are proteins that target particular invaders, allowing it to "remember" the invaders and attack them in the future. Research indicates that Borrelia burgdorferi can cause dysfunctional adaptive immune responses.

In sum, the innate immune system is vital for mediating how your body initially responds to Lyme infection, whereas the adaptive response is crucial for your long-term response to the disease.

It is also important to note that Borrelia burgdorferi is a trickster amongst pathogenic bacteria. While our bodies can make antibodies to Borrelia, which should, in theory, confer "memory" and long-term immunity against infection, Borrelia can become unrecognizable to antibodies over time by changing the proteins it presents on its outer surface. Antibodies made by our immune systems that previously recognized the bacterium subsequently become ineffective because they can no longer recognize Borrelia behind its clever “disguise.” Keeping our bodies well supplied with the nutrients needed for optimal immune function may help us address this tricky bacterium.

The body requires a vast array of nutrients for the proper functioning of the innate and adaptive branches of the immune system. Optimizing our nutrition with these critical nutrients may help our immune systems fight off Lyme disease more effectively. Let’s discuss the essential nutrients needed for healthy immune function in Lyme disease and how you can acquire these nutrients through a whole foods diet. Please note that this is not a comprehensive list of nutrients involved in immune function, but a highlight of a handful of key nutrients! 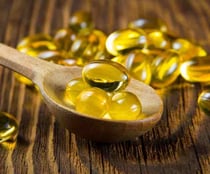 Vitamin D3 (cholecalciferol) is a fat-soluble vitamin well-known for its role in helping our bodies absorb calcium, aiding in bone health. However, a vast body of research indicates that vitamin D3 is also essential for healthy immune function. Within the innate immune system, vitamin D3 supports the production of cathelicidin, an antimicrobial peptide (protein) that protects the body against bacteria, viruses, and fungi. Vitamin D3 also regulates dendritic cells, which are immune cells that "bridge the gap" between the innate and adaptive immune system branches and may help defend the body against Borrelia. (4, 5)

Vitamin D is frequently low in patients with persistent Lyme disease, and a deficiency is associated with a poor healing trajectory. (6, 7) On top of that, Borrelia burgdorferi directly reduces vitamin D receptor expression in immune cells, increasing the need for vitamin D. (8) Supplementation with the active form of vitamin D has been found to inhibit the progression of Lyme arthritis. (9) Together, these findings indicate that vitamin D is critical for Lyme disease recovery.

Throughout most of human history, our ancestors obtained vitamin D through plentiful sun exposure and the consumption of a few vitamin D-rich foods, including egg yolks and fatty cold-water fish. However, today, most people need to supplement with vitamin D3 to maintain an optimal blood vitamin D level of 40-60 ng/mL, which is tighter than the 30-60 ng/mL range suggested by most labs.

Vitamin A, or retinol, is another fat-soluble vitamin essential for healthy immune function. Vitamin A regulates immune function at epithelial barriers, including the skin and the gastrointestinal tract lining. Vitamin A deficiency has been found to exacerbate Lyme arthritis in mice by promoting an unproductive, chronic inflammatory response. (10) Top food sources of vitamin A include beef liver, egg yolks, and specific fatty cold-water fish, such as salmon and sardines. Carotenoids from orange and yellow-hued foods can be used to make true vitamin A (retinol), but this conversion process is inefficient in many people, necessitating intake of vitamin A through the aforementioned food sources. 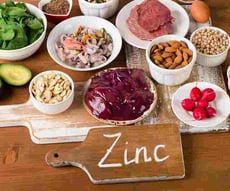 Zinc is an essential micronutrient that plays a critical role in numerous physiological processes throughout the body. It plays several roles in regulating immune function, including the normal development of innate immune cells, which comprise the body's frontline defenses against pathogens. (11) The production of cytokines, or immune signaling molecules that regulate inflammation and pathogen destruction, is also significantly influenced by zinc availability. Zinc insufficiency compromises the cytokine response to pathogens and causes an overshooting of the inflammatory response, leading to unproductive inflammation. Zinc also fortifies immune defenses in the gastrointestinal tract. (12) Low stomach acid, gut dysbiosis, and a low intake of foods rich in zinc, such as red meat, poultry, and seafood, can cause zinc deficiency. Top food sources of zinc include oysters, beef, poultry, and pumpkin seeds.

Selenium is a critical cofactor for glutathione peroxidases, an enzyme that regulates glutathione levels in the body (more on glutathione next!). (13) Selenium also protects neutrophils, a white blood cell, against damaging oxidative stress. (14) I recommend that clients obtain selenium from whole foods rather than supplements. Some of the best dietary sources of selenium include Brazil nuts, cod, shrimp, salmon, scallops, chicken, eggs, turkey, lamb, and shitake mushrooms.

Glutathione is an antioxidant and cell-signaling molecule that helps our bodies combat oxidative stress. Interestingly, emerging research indicates that glutathione plays a critical role in the immune response to B. burgdorferi, thus influencing the course of Lyme disease. (15)

Nutrition is a powerful tool for supporting the glutathione system. Our bodies require specific amino acids, vitamins, and minerals to produce glutathione. Certain functional foods and phytonutrients can also promote glutathione synthesis. For example, the amino acids methionine, cysteine, and glycine are the building blocks of glutathione and are abundant in animal protein. Glycine is an amino acid needed for glutathione synthesis and is found in a limited number of animal foods, particularly collagen-rich foods such as collagen peptides, which can be taken as a supplemental powder added to smoothies or tea, and bone broth.

Last but not least, omega-3 fatty acids are crucial for supporting immunity in individuals with Lyme disease. Eicosanoids, inflammatory mediators derived from the omega-6 fatty acid, have been found in animal studies to promote inflammation in Lyme arthritis. (18) Research indicates that inhibition of COX-2, an enzyme involved in eicosanoid metabolism, reduces Lyme arthritis symptoms without impairing bacterial clearance; in other words, omega-3 fatty acids may mitigate Lyme-induced inflammation without compromising the immune system’s ability to fight the infection. (19) Omega-3 fatty acids are natural COX-2 inhibitors and anti-inflammatory agents, thus suggesting that they may help reduce inflammation in Lyme disease and facilitate a more effective immune response. (20)

Eating at least three servings of fatty cold-water fish per week, aiming for an average intake of 1.5 grams of omega-3 fatty acids per day, is an ideal target. The types of fish that are highest in omega-3 fatty acids and lowest in mercury include the “SMASH” seafood (salmon, mackerel, anchovies, sardines, and herring).

Ideally, your intake of immune-supportive nutrients should be optimized within the framework of a diet that is anti-inflammatory and nutrient-dense. For more information on anti-inflammatory eating and Lyme disease, be sure to check out the first blog in this series, How To Optimize Your Lyme Disease Recovery with Nutrition. 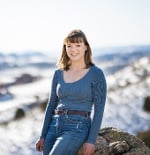 Opinions Expressed by contributors are their own. Lindsay Christensen, MS, CNS, LDN, CKNS is a Clinical Nutritionist at Ascent to Health and ADAPT Certified Functional Health Coach. If you have Lyme disease and need one-on-one nutrition support, consider working with me in my clinical nutrition practice, Ascent to Health. In my practice, I help clients with Lyme disease restore their energy, mental clarity, and gut health so that they can feel their best and be fully engaged in their lives. In addition, I help my clients uncover the factors standing in the way of a full recovery and optimize their health from the ground up, using science-based functional nutrition and lifestyle strategies.