Saving Spoons: Not Just of Energy, But of Time 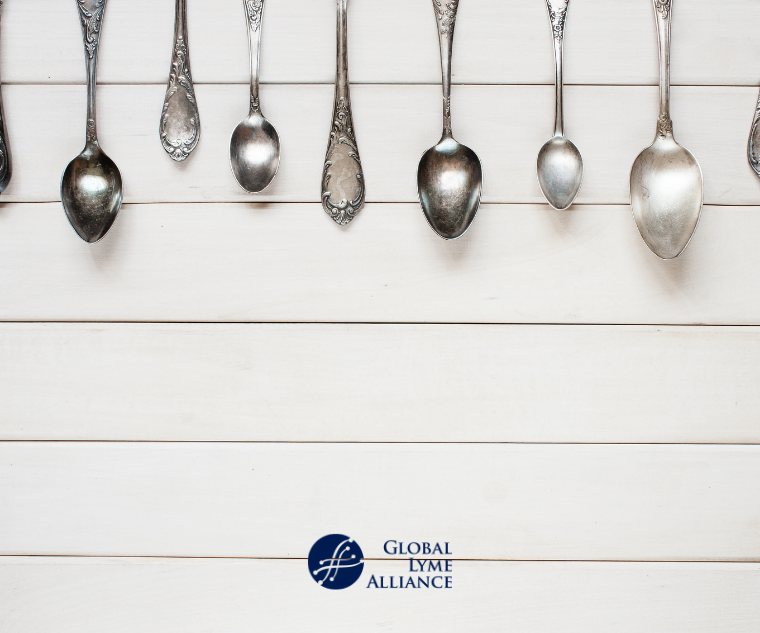 Those with Lyme disease and other tick-borne illnesses may struggle to complete daily tasks and activities due to a lack of energy.

The “Spoon Theory” has become well-known in the chronic illness world. Originally coined by lupus patient Christine Miserandino, the theory stems from a conversation she had with a friend in which she tried to explain what her daily life is like. She handed the friend a bunch of spoons and asked her to describe daily activities. With each basic task her friend listed off—showering, driving, dressing—Miserandino took a spoon or two away. The spoons represented energy. Most healthy people don’t need to think about having enough energy to do everyday tasks, but people with chronic illness lose a spoon—or several—every time they do, well, anything. If you are one of the many patients who has to parse out your energy, you know what it’s like to only have a certain number of “spoons” per day. You also know that once you run out of them—which could be by the time you finish breakfast—there are no reserves. I hadn’t yet heard the “Spoon Theory” when I was first diagnosed with Lyme disease, babesiosis, ehrlichiosis and Epstein-Barr virus, but I certainly knew the struggle it describes. It was hard to explain to people that pushing myself would only make me worse. I knew that if I emptied the dishwasher, I wouldn’t have the energy to dry my hair. To a healthy person, this kind of thinking might seem neurotic or dramatic. For a patient with debilitating illness, it’s a survival tool. As I’ve gotten healthier and worked my way into remission, I’ve been granted more spoons, but I’ve also learned to be more judicious with them. I no longer feel guilty getting help with tasks like housecleaning, because I’ve learned that part of living with a long-term illness is figuring out ways to enjoy a balanced life. Selecting how I spend my energy spoons is similar to doing a risk-benefit analysis. As my life has gotten fuller, I’ve also realized that it’s not just spoons of energy I need to protect; it’s also spoons of time. Everyone, healthy or sick, is pressed for time. People juggling work, family life, and these days, remote schooling, simply don’t have as many hours in the day as they want or even need to get everything done. But Lyme patients, or those dealing with other debilitating illnesses, have even fewer spoons of time. When I was at my sickest, I might get one good hour of energy a day. “Good” meant I could come downstairs for a meal, or talk on the phone for ten minutes, or compose a few emails. Some days I got more, some days I got none. Now that I’m working, living on my own, socializing, and exercising, I still don’t have as many spoons of time as I did before I got sick. I need to nap every afternoon, without exception. If I don’t, I’ll hit a wall of fatigue and brain fog that will ruin the rest of the day and likely several subsequent days. It’s a need I’ve learned to respect in order to replenish my energy spoons. It’s also a need that decreases the number of hours I get per day. I’m at my best in the morning, so that’s when I do the majority of my work, often filling four hours with the amount of work I might otherwise do in six or eight if I had the time. I’m not efficient because I’m particularly good at what I do; I’m efficient because I have no other choice. If I’m on deadline and the work isn’t done by lunch time, I can’t just say, “Oh I’ll take another couple hours to finish this afternoon.” It’s like working with an hour glass next to me, watching the sand drip down. Once it’s gone, it’s gone. Sometimes, I have a medical appointment that takes up a work morning. By the time I get home and eat lunch, it’s nap time, and suddenly the appointment has taken up the whole day. I often have to make up work hours in the evenings or on the weekends. When I’m out and about on a weekend, I need to make sure I’m home in time for my nap. Again, I often feel like I’m racing against the clock. My hope is that as I continue to get healthier, I eventually won’t need the nap, but for now it’s an imperative that I must work around. I’m not complaining or looking for pity. I feel lucky to be able to do all that I can, and I know that other people have constraints that also eat up their work or fun time. I simply want to illustrate for healthy folks, as Miserandino did with her friend, how precious both spoons of energy and time are for the chronically ill. Please don’t take it personally if a patient doesn’t call you, or text you back; just give them a luxury they don’t always have: time. For more blogs, click here