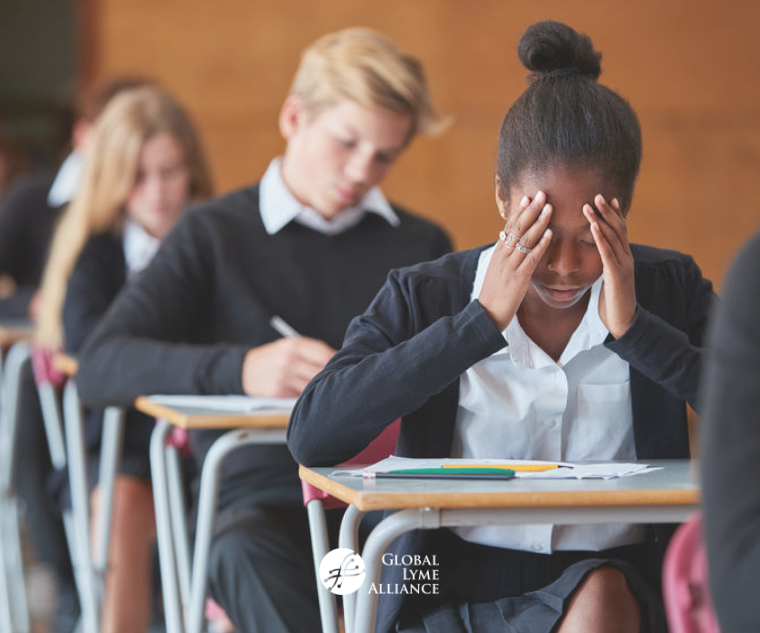 Can you imagine missing all of the second grade? Or having to leave college? Lyme disease can have a devastating impact on kids in school.

When I was a junior in college, I started getting headaches while doing my homework. Textbook print, which had always been easy for me to read, suddenly seemed small and difficult to focus on. I found myself straining my eyes and struggling to concentrate, often losing my place and having to re-read entire paragraphs a few times. Sometimes I would feel dizzy or nauseous after studying too long, like I was experiencing vertigo.

Thinking my eyesight had worsened, I went to see my ophthalmologist. He suggested magnifying glasses. The answer, I regret to report, was not that simple.

I was suffering from three undiagnosed tick-borne illnesses. Lyme disease, but also two tick-borne co-infections—babesia, and ehrlichia—which had crossed into my central nervous system. I’d been bitten by a tick two years earlier, but I was not subsequently tested for tick-borne infections.

My rash had been brushed off as nothing, and the on-and-off flu symptoms I had in college were also written off as me “just being run-down.”

For the rest of my college career, I wore magnifiers to read, which helped to a degree, but I also developed other, seemingly idiopathic neurological symptoms, such as hand tremors. It would be another six years before I was accurately diagnosed. And I was one of the lucky ones.

I still finished college on time, studied abroad, double-majored, and graduated with high honors. Later, when I was in the midst of treatment, bedridden and suffering from Herxheimer reactions, I couldn’t read at all. Sentences in a simple celebrity magazine swam before my eyes. I couldn’t type because my fingers and forearms ached too much. Writing more than a paragraph by hand exhausted me. Spending more than a few minutes in front of a computer or other screen would leave me with a screaming migraine.

Had I been in school then, I probably would have had to drop out. I might have never earned my degree.

This sadly is the case for many Lyme patients, whether they are diagnosed and under treatment, or suffering from debilitating symptoms which are not yet diagnosed. I know students who had to take a semester or a year off; college students whose illness(es) allowed them only to study part-time, and who still suffered for doing so; even high school students who were home-schooled, hoping to finish their studies in six years instead of four; and elementary school students who had missed two, three, four years of class.

Can you imagine missing all of the second grade? Not being able to socialize with your classmates?  Not having the chance to sit at your desk with fresh school supplies, learn math with your peers, and run around at recess? Missing lunch in the cafeteria, after-school sports tournaments, and evening dances? Aspects of school that I took for granted—and even complained about—but which feel like fantastic unattainable dreams to young patients with a tick-borne illness.

And those are the ones who know that they’re dealing with a tick-borne illness, and are under the care of a Lyme Literate Medical Doctor (LLMD), the ones who hope to regain at least some of their physical and cognitive capabilities one day. For college students like me, who don’t yet know they have tick-borne illnesses, all they know is that suddenly math equations that were easy last year are impossible this year. They are suddenly mixing up their letters, forgetting assignments. They can’t concentrate in class, and often have their heads on their desks because they’re so tired. They’d rather nap than run around at recess. They might have headaches, inappropriate outbursts, frustration and rage, or malaise.

From an outsider’s perspective, these symptoms might seem psychological or behavioral. And sometimes they, in fact, are. That’s why it’s important that children be clinically evaluated for all possible root causes of their struggles. But if a child seems to be suffering from common Lyme symptoms, or spends time playing outdoors, or who suddenly finds a tick bite or rash, they should also be evaluated for the possibility of tick-borne diseases as soon as possible.

Sadly, children ages 3-14 are at the highest risk for these diseases because they spend so much time outside (and are lower to the ground than adults, often rolling around in the grasses or running through the woods).

Early detection is key. Not only doctors but school nurses, teachers, and parents should know signs and symptoms to look out for, and should be aware of the many preventative measures such as doing daily tick checks, drying clothes at high heat, wearing light-colored clothing, and wearing long pants and high socks. Lyme disease that is caught right away can often be cleared up with three weeks of antibiotics. If you miss this early window for treatment your risk for chronic disease grows exponentially. Why, even of those treated in a timely fashion some 20% still advance to the chronic forms of the disease.

Had my tick-borne illnesses been diagnosed immediately, in all likelihood I would have had an easier time studying, and could have kept up my high-achieving momentum for more than just a couple years after college. Instead, I ended up losing the second half of my twenties. I don’t want that to happen to you or your child.