When Lyme, or any chronic illness, turns once mundane tasks into the near impossible.

With the calendar turned to September, school has started and life for many people has picked up speed. A new school year brings new schedules to juggle, and to-do lists that grow longer by the day. Everyone has a to-do list, whether you have kids or not, and even in this technological age, staying on top of tasks can be overwhelming.

For Lymies, or anyone who is sick, overwhelming can quickly shift to impossible.

In my healthy days, chores like “empty the dishwasher” or “set the table” were just part of daily life, not tasks I had to think about and plan for. My to-do lists had items like “clean garage” or “call so-and-so back,” and while some of those tasks slipped by the wayside, I could generally organize and prioritize them without much stress. All of that changed when I got sick. Suddenly, I had to choose between making the phone call or setting the table, because doing both—let alone at the same time!—would wear me out to such an extreme that I might suffer for days.

I remember telling a friend, over the phone, that I was mad at myself for having done the laundry that day, because I wasn’t able then to go to dinner with my family. “If I’d saved my strength, I might have had the energy to go out,” I lamented. She replied, “Maybe you should talk to your therapist about not obsessing over such little decisions.”

The thing is, they weren’t little decisions, at least not at the time. It was 2007; after more than a year of successful treatment, I’d relapsed. Back on antibiotics and bedridden once more, my physical and neurological symptoms were worse than they’d ever been. I struggled with basic functions like showering and preparing meals.

Now, from a standpoint of wellness, I can see how absurd choosing between laundry and dinner must have sounded to my friend. I can understand that for a healthy person, parsing out one’s energy in such minute ways can seem obsessive. But for a Lymie, it’s reality. 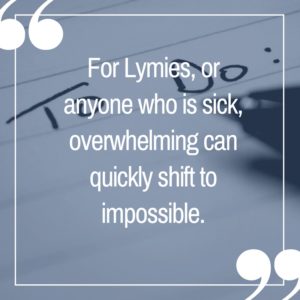 I’ve yet to meet a patient of any illness who has dedicated energy to cleaning their garage; priorities simply shift when you’re ill. But what about things that have to get done? The phone call to insurance that must be made if you want your medication to be covered? The appeal letter that must be written when that coverage is denied again? With Lyme, these simple tasks become missions that are so overwhelming they can be paralyzing. Worse, the stress brought on by not being able to do them—but knowing you have to—can send a Lyme patient into a tailspin of anxiety, causing spirochetes to rev up and symptoms to increase. It’s a vicious cycle, and it can feel like there’s no way out.

One night during my relapse, I shared this conundrum with a different friend on a different phone call, one that proved to be worth my energy. He didn’t belittle my concerns. Instead, he suggested that I think about all of the tasks I needed to complete in a week, and then create a separate to-do list for each day. I wrote out a long list of everything on my plate, and then together we prioritized what absolutely had to get done and when. Next, we put tasks together in manageable groups. Drying my hair and ironing could not be done on the same day. If I made an insurance call on Monday, I wouldn’t make another until Thursday. The real clincher was, if something was scheduled for Thursday, I was not allowed to worry about it until then. “It’s on Thursday’s list,” my friend said. “You can’t think about it until then.”

This advice was game changing for me. Life—beyond the stressors and physical pain—became manageable, and that invariably helped me to heal faster. Now that I’m feeling so much better, I still make to-do lists in the same way, because I know doing so will help me maintain my health. I need to continue to function at a steady pace. When my mind starts to slip into worrying about what’s happening on Wednesday, I literally say to myself, “You’re not allowed to think about it until Wednesday.”

It’s good advice for anyone, really, whether you’re managing a chronic illness, a large family, or a hectic schedule. I have one more piece of advice to add: be sure to put fun things on your to-do list, too. I certainly won’t chide you for prioritizing “eat chocolate” or “smile.” In fact, I’ll say you’re allowed to worry about those things every day. Checking those items off your list may just shift impossible to I’m possible.

Jennifer Crystal is a writer and educator in Boston. She is working on a memoir about her journey with chronic tick-borne illness. Jencrystal5678@gmail.com